According to reports from Alphaliner the Coronavirus renders nearly 9% of container shipping fleets inactive. The global fleet is 23,676,000 TEU, which means 2,130,840 TEU are inactive.

The Ports of Los Angeles and Long Beach are facing 56 canceled sailings over the first three months of the year, the ports told. The Port of Oakland is expecting 23 blank sailings for February through March, a spokesperson said.

The Coronavirus crises has seen the headcount of unemployed vessels increase day by day as services are closed. In terms of 'inactive capacity', the ship idling is now worse than in the 2009 and 2016 crisis years. Keep in mind though, that these are absolute numbers - the global fleet has also grown very significantly since 2009. 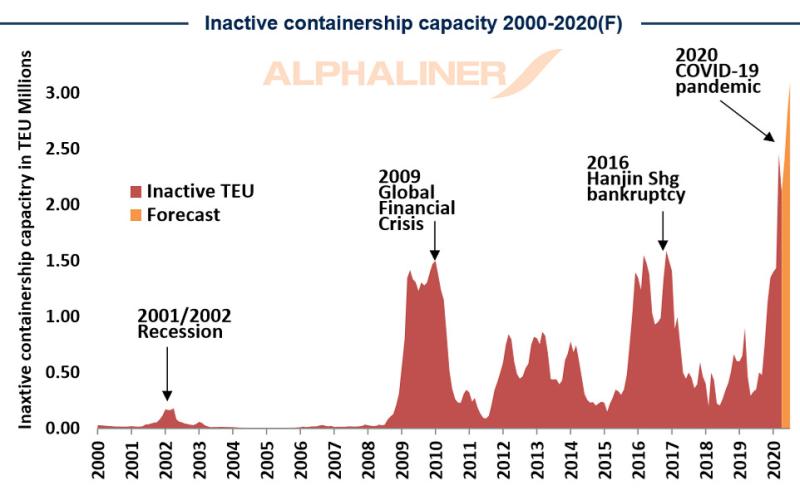 What does it mean for Marine Pilots?
Fewer vessels in voyage mean less pilotage and this means less income for many Pilots. Not every Pilot is an employee and many pilots are self-employed and organised in a brotherhood per example. They are earning only money if they are piloting a vessel. No vessel – no money. So they feel the financial impact of the corona crisis directly in their wallet.

One Brotherhood in Germany reports that the number of piloted vessels has decreased to 20% of the normal volume, because a big manufacturer has closed his factory near the harbour. They have never had a situation like that before - in decades. Canal Pilots are losing pilotages because the vessels accept longer distances in order not to take the risk of onboarding a stranger like a Maritime Pilot.
No Pilot could imagine this before.

A thank you to Jan Tiedemann and Alphaliner for counts, graphic and support.

There are three comments to this.
Login or register to view comments and join the discussion!
Read more...

Article Current status of the next upcoming Maritime Pilots' events

What events and meetings for Maritime Pilots are scheduled? Which events are canceled or postponed?
An overview on Marine-Pilots.com:

A patrol boat of the Navy of Venezuela sank in international waters after apparently shooting and ramming a German cruise ship. Allegedly the "Resolute" was to be diverted off course.

'HMM Algeciras' at its second Asian port destination; HPNT in Busan New Port Steadily filling up around Asian ports prior to her transit westbound towards N. Europe

Good aerial views of dozens of merchant ships entering New York's harbour. Various shots of life aboard a New York pilot cutter. The pilot is rowed out to a merchant ship, goes aboard and then is picked up again. Apprentice pilots on board a training ship scrub the decks, lower a rowing boat over the side and study charts with a senior pilot to become familiar with the harbour.

A pilot boards a luxury liner. Good shots of the New York skyline as the pilot issues instructions to take the liner out of the harbour. He is collected by a launch. General view of a pilot ship on the water.
FILM ID:1204.04

Ingemar Virtual Harbour with some of the 2019 designs