What is a SWASH pilot boat? What's the difference to the SWATH technology?

At the A&R shipyard in Germany, the successful principle of SWATH boats was further developed in 2013: The SWASH principle allows sea-going, smaller and more economical boats.

The particularly seaworthy SWATH pilot transfer boats (Small Waterplane Area Twin Hull), which are successfully marketed by Abeking & Rasmussen (A&R) shipyard, now have a smaller sister in the form of the SWASH design. SWATH constructions are twin hulls that sail on torpedo-shaped buoyancy bodies. Their decisive advantage over conventional ships is the better seaworthiness. They react to wind and waves with considerably less movement. These are characteristics that make them particularly suitable as pilot boats. For the pilots, the reduced boat movement makes it much safer and easier for them to climb over to large freighters. A&R produces SWATH boats in the sizes of 25, 40 and 50 meters in length.

For several years, the world-famous high-tech shipyard with its long yachting and shipbuilding tradition worked on the SWATH principle until it was ready for series production. The further development of the SWASH (Small Waterplane Area Single Hull) now had economic reasons. Pilots on the river Elbe wanted a lighter and more economical transfer boat than is possible with a SWATH construction, but did not want to do without its positive features. 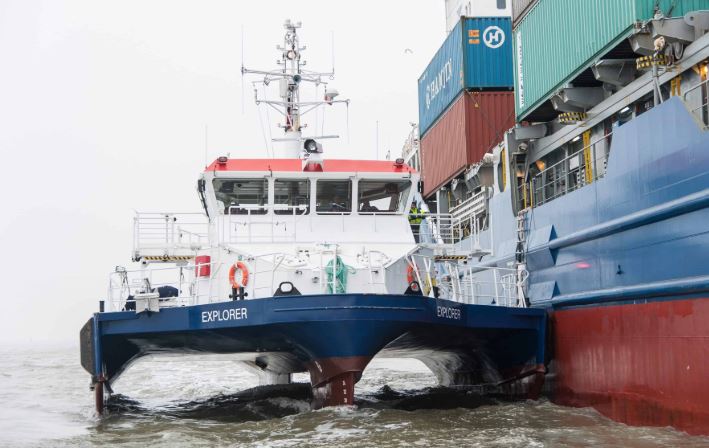 According to Björn Widenbäck of A&R, the SWATH boats designed as catamarans cannot be offered much smaller than with a length of 25 meters. "Otherwise, the deep hulls in which the propulsion system is housed would not offer enough space for the propulsion system," he said. The solution now is the 20-meter long SWASH construction "Explorer" with only one hull and two trimaran-style stabilizing floats. "The Explorer is therefore faster, more maneuverable and above all more economical than a SWATH construction," Widenbäck said.

That the concept worked out was already clear after the first test runs. No wonder the pilots talk about the "most modern water taxi in the world". The aluminium prototype, which is over twelve meters wide and 3.10 meters deep, is made by A&R and will be used by the Elbe Pilot Brotherhood from Brunsbüttel for the next few months. After that, the pilots intend to enter into sales negotiations with the shipyard.

The new ship type was built in 2013 in the German high-tech shipyard, which is well utilised, in addition to existing orders. Therefore, the development and construction period had taken almost eight years.
As in the construction of the SWATH ships, safety, reliability and efficiency were the main criteria for the deep hull. The 900-kilowatt (over 1,200 hp) diesel engine from MTU, gearbox and an additional generator were accommodated in the hull tube. The unusual trimaran, with a displacement of 65 metric tons, thus achieves a speed of almost 20 knots - more than sufficient for transferring pilots to large container ships. On the Elbe, these vessels are not allowed to fall below a speed of eight knots in order to remain controllable, and they often travel at this speed. But even with more speed, the speed of the "Explorer" is sufficient.

Maneuverability and acceleration are particularly important for pilot transfer boats. The "20m SWASH construction" from A&R meets these criteria exactly. 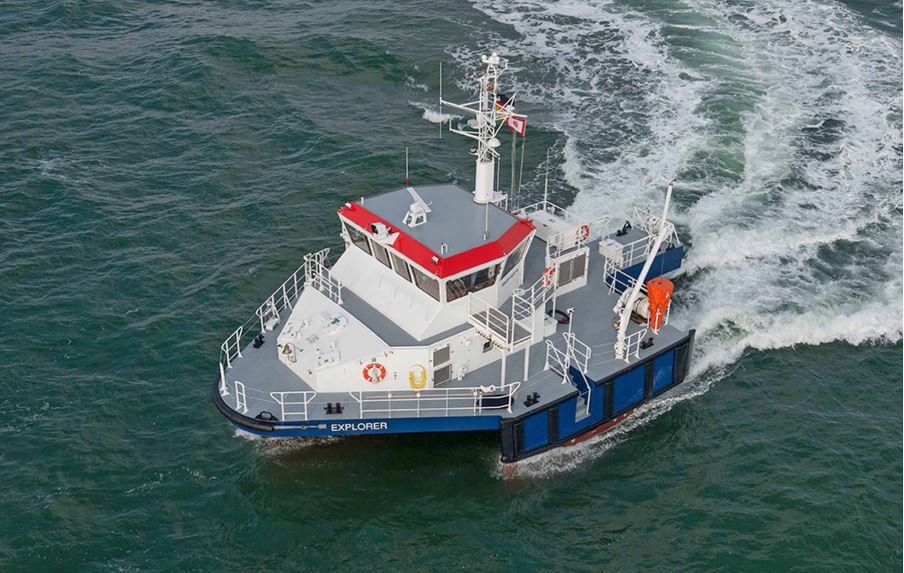 SWATH and SWASH are interesting technologies that allow a vessel to sail much more calmly in high waves. A stable and calm position of the ship is especially important for pilot boarding.

Ships don't exactly have brakes. Lou Vest, a retired Houston ship channel pilot tells us about a close encounter between a ship and a barge.

Found on YouTube. Created by "Houston Maritime Education Center and Museum".
With ships as large as 175 feet wide and a channel a maximum of 500 feet wide, how to you safely pass? Former Houston ship channel pilot, Lou Vest, explains how ships fight against hydrodynamics to pass with such narrow margins.

Found on YouTube. Created by "Marine Online".
With the increasing accuracy and reliability of navigational receivers, this part of the video module will try to establish a better understanding of the mathematical definition of the Earthâ€™s surface and mapping of this curved shape onto a plane surface.

Found on YouTube. Created by "Bumble Bee Productions".
The sun was out and was a beautiful day, I was searching for a light house in the area and there was one in Cameron, La. I started my way to the light house not thinking how bad Cameron was hard hit by two hurricanes. After a few dozen downed power poles I was met with the National Guard and the Po Po. Needless to say I turned around and I had passed the port so I decided to drone this area. Not a bad place and a ship was being assisted by two pilot boats. I never tire with maritime activities....

Pilotage job at Tanger Med Port. Sailing of APL Lion City from Eurogate Terminal. She is lengthened to 398 m LOA , and increased her capacity to 17,300 TEU.