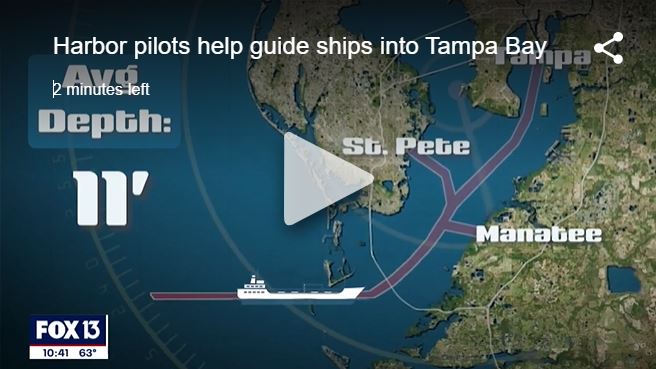 Article with video courtesy of FOX13News.com (link below). Photo screenshot from video

The 200,000 ton ships and cruises coming in haul gas, goods, and people in and out of Tampa Bay – $23 billion worth of good every year.

They're captains, though, aren't the ones steering them under the Skyway Bridge. One of Tampa Bay's harbor pilots can hop on, and while on the move, climb aboard to guide the ships in.

Harbor pilots spend years studying Tampa Bay's waters and need to be at every ship captain's side, calling out every command.

They not only have to be maritime experts, but athletes often climbing up 25-30-foot rope ladder.

Jump to original source on Fox13News.com

Jump to original source on Fox13News.com
What's your opinion on this?
Login or register to write comments and join the discussion!
Read more...

In the second of our series focusing on ‘Our people at ports’, we catch up with Pierre Chays, our Marine Safety Manager and Pilot who gives us a behind the scenes look at what our Harbours Team is doing during these difficult times in supporting the movement of essential freight services in and out of the Island. For him, it is very much ‘business as usual’ – and outside of his working hours he’s getting used to having another baby around the house.

The "Navig8 Axinite" is a 184 meter tanker. It is in loaded conditions. two tugs are used. The maneuver consists of backing out using 2 tugs and the ship´s engine, for about 2 and a half ship´s lenghts an then turning to port. After the turn, you can hear me talking with the captain about passing arrangements with an inbound vessel, (another tanker).

Southampton, Hampshire. Various shots of Trinity House pilot cutter "Penda". M/S pilot's bridge. M/S as Second Officer Harry Goddard leaves the bridge and walks along the deck to his cabin. He takes his cap off, sits down at a table and looks at an album. C/U of his collection of matchbox labels. M/S Goddard sticking in more labels. C/U's Goddard and album. Various shots as he sticks in the labels. M/S of Pilot Knight and Captain Jolliff seated at desk. A waiter enters their cabin and...

This is the Ben Madigan pilot boat, one of the hard working fleet of Belfast Harbout pilot boats. ( I'm not sure but I believe this might be a Redbay Stormforce, built by Redbay boat builders at Cushendll. )
These fast, sturdy, boats have to ferry Belfast pilots out to large vessels coming in to Belfast harbour. Piloted vessels range from large tankers, bulk carriers, container ships, ferries and cruise liners, right down to barges and fishing boats. Not only this, Belfast Harbour pilots...

Opinion What is a Tug's Bollard Pull and How İt is Calculated?
662