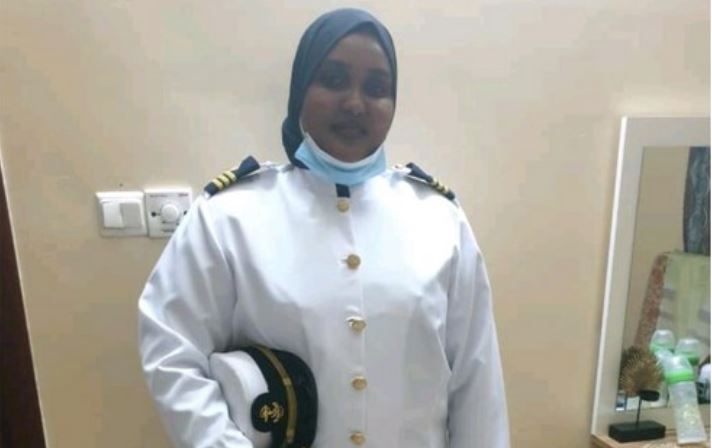 Sea transport has for many years been a reserve of men with few women getting the opportunity, especially in most African countries. But for Fatouma Ali Ahmed, women can equally steer ships just as men can do.

Fatouma is the first female marine pilot in the port of Djibouti and currently heads the Pilotage Department in the same port. According to her testimony posted on LinkedIn, Fatouma, a mother of 3-year-old twins joined the marine industry in 2012.

But she had to study English for six months first before starting her formal training as a marine pilot. Despite concluding her studies, Fatouma still needed a practical experience at sea but could not get the chance in her country or neighbouring Ethiopia.

“As a female in the Maritime Industry one of my greatest challenges has been trying to get sea time,” Fatouma said. “All my male classmates that I attended class with were already at sea doing their sea time with the Ethiopian shipping company and at the time the company was not accepting woman onboard their ships.”

Her chance would finally come when the Djibouti port authority got her a chance at P&O Maritime in Australia, ‘where I was able to complete my sea time.’

Fatouma attributes her success to ‘progressive parents who believed in educating their daughter’. She adds that she is married to a marine engineer ‘who is a great support system since he understands the industry.’
Original article from Hiiraan Online

Port de Dijibouti
What's your opinion on this?
Login or register to write comments and join the discussion!
Read more...

Elizabeth Marami, 28, has made history by becoming Kenya’s first female marine pilot. Born and bred in the coastal city Mombasa, Marami initially studied law at the University of Nairobi, but later changed course and went on to pursue navigation in Alexandria, Egypt for 5 years. “I always grew up knowing that I wanted to do something different, Something out of the ordinary. Being awarded a scholarship to pursue this career was God’s answered prayer…,” she says.
Her job as a marine pilot...

Women’s rights and gender equality are taking centre stage in 2020. But for some women, the fear of gender discrimination has never stopped them from pursuing their dream and Ms Amelia Pickering, a Harbour Pilot, is one of them.
Inspired by her father, she shares how she started her journey in the Maritime industry and some of the challenges she faced being a female Harbour Pilot.

Safehaven Marine has signed a contract with the Port Authority of Montrose on the east coast of Scotland for the delivery of a 15m pilot boat Interceptor 48, scheduled for delivery in August 2022.

Two investment contracts for supplying 10 pilot boats required by the country's ports, as well as a memorandum of cooperation between the PMO and Iran University of Science and Technology will be Signed by the Minister of Roads and Urban Development.

It turns out that supertankers and cruise ships have valets. They're called maritime pilots, and they're among the most elite ship handlers in the world. So where does one go to learn how to park the largest ships in the world? To the Maritime Pilots Institute in Covington, La. There, they use mini-versions of the behemoth boats to teach the basics. All aboard!