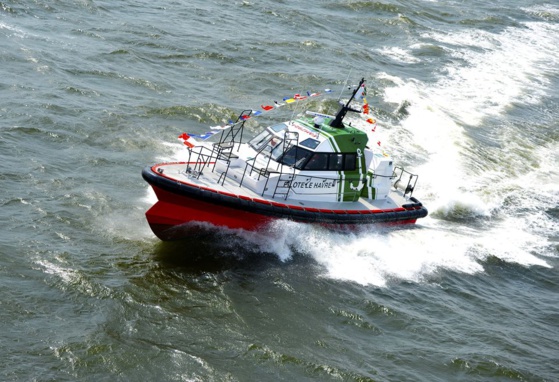 All decked out, "Sainte-Honorine" was moored, for her christening ceremony, right next to her ancestor, the sailing ship "Marie-Fernand", a wooden pilot cutter launched in 1894, which has since become a historical monument. The brand new launch has joined the pilot station of Le Havre-Antifer-Fécamp which, approximately every four years, renews its fleet of six units.

Delivered at the end of July by the Sibiril Technologies shipyard in Carantec (Finistère), this new 16.18-meter long and 5.53-meter wide glass and resin composite unit is an optimized version of Didier Marchand's Pantocarène design office.

The design of the hull with a polyhedral rostrum allows for better handling at sea; the bulkheads of the launch, propelled by two lines of shafts and two engines with a power of twice 368 kW, have been modified for better sound insulation in the wheelhouse (around 70 decibels in the cabin in operation); the engine room has been designed to eventually accommodate a device for reducing polluting emissions (nitrogen oxides, or NOx). The launch has also been fitted with new equipment, such as the ladders attached to the bow to secure the pilot's passage to the steering ladder.

Pavel Pereira, president of the station, which has 49 pilots and 44 employees and carries out an average of 9,000 to 11,000 movements per year, recalled: "To accomplish our mission of service to ships in port, the search for performance requires maintaining the means of boarding at the highest standards.

The ship was named after a Norman martyr who symbolized the link between the Île-de-France region and Le Havre through her life. Its godmother was Liselotte Rufenacht, wife of Antoine Rufenacht. The former mayor of Le Havre, who died in September 2020, had been a major architect of the port's expansion, with the Port 2000 project.

L'Antenne - SPI
What's your opinion on this?
Login or register to write comments and join the discussion!
Read more...

This updated video shows how easy it is to develop an arrival plan with the SAMMON Planning Tool. As a sample the arrival from appraoch until the berth to Ft. Lauderdale is used under strong current of 2kn. At the simulator training courses where we used this tool for preparation of a manoeuvring plan during the briefing sessions all nautical officers involved stated afterwards: "Why don't we have this tool on our ships?"

Serkan Kahraman and Yusuf Zorba have published a new book for marine pilots. In this book, maritime pilots and shipmasters’ situational awareness levels have been analyzed using a bridge simulator system and the results have been obtained.