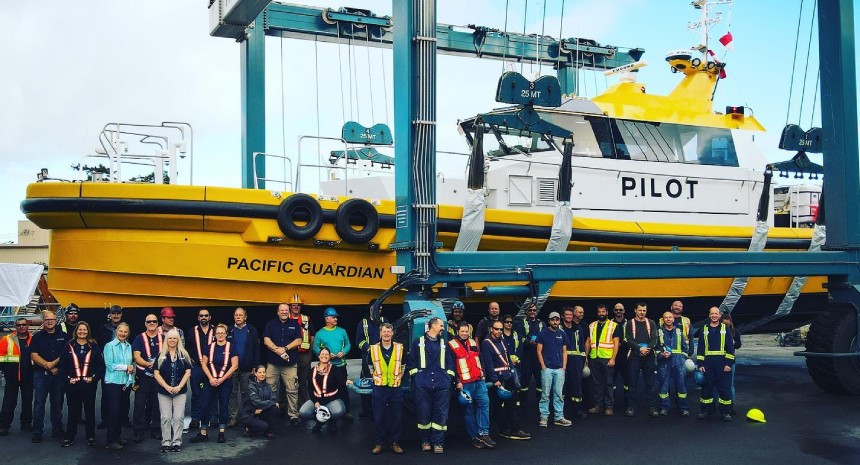 The LR-classed, Camarc-designed Pacific Guardian has a length of 19.9 metres and is powered by two MAN 745kW IMO Tier III-compliant diesel engines driving Hamilton waterjets to deliver a cruising speed of just over 25 knots. Onan generator sets supply power for the onboard systems.

As with the other pilot boats in the PPA fleet, Pacific Guardian will be operated in the Fraser River and BC’s coastal waters.

Ocean Pacific Marine
What's your opinion on this?
Login or register to write comments and join the discussion!
Read more...

Port Canaveral will add a new security patrol vessel and a pilot boat after receiving federal grant funding for several projects to protect against terrorism and other security threats.

Here’s a nice video of the rough weather sea trials of San Ciprian’s new Interceptor 42 Pilot boat ‘San Ciprano’. With the Covid-19 travel restrictions in place and the Guys from San Ciprian unable to fly here at present we’re having to do a remote ‘on-line handover’. So we made this video to give them every confidence that she is performing well, as she handled comfortably the stormy conditions prevailing on the South Coast of Ireland last Friday nicely, with winds of 50kts at the entrance...

The Spring 2022 edition of our magazine The Master, Mate & Pilot is available online.

The smart fairway digitalization pilot is a part of the EMMA Extension project that is funded by the Interreg Baltic Sea Region Programme. This summer, 34 smart buoys were installed in the Saimaa deep fairway, which is Finland’s most important inland waterway for merchant shipping.
Safety is enhanced in particular by the fact that the pilots and VTS can adjust the light output of beacons and the rhythm of lights to support the navigation of vessels in poor visibility and weather conditions....

In this movie the efficiency of two different pod operation strategies is compared: With azimuth propeller ships the Pods can be used in two ways to control the speed, e.g. for speed reduction: 1. by adjusting the engine orders, e.g. by reducing the RPMs to get lower speed - this means to drive the ship in the same conventional way as for twin screw vessels, 2. by turning both pods either in- or outward (TOE-IN or TOE-OUT) to reduce the forward thrust and therefore reducing the speed – the...

Another very good explanatory video by Knud Benedict. Absolutely worth seeing.
Yaw Stability is an important element of Ships Manoeuvrability - both for course keeping and turning ability. This first video in a series explains the Basic Principles of stability in steady state equilibrium conditions and the forces / moments involved