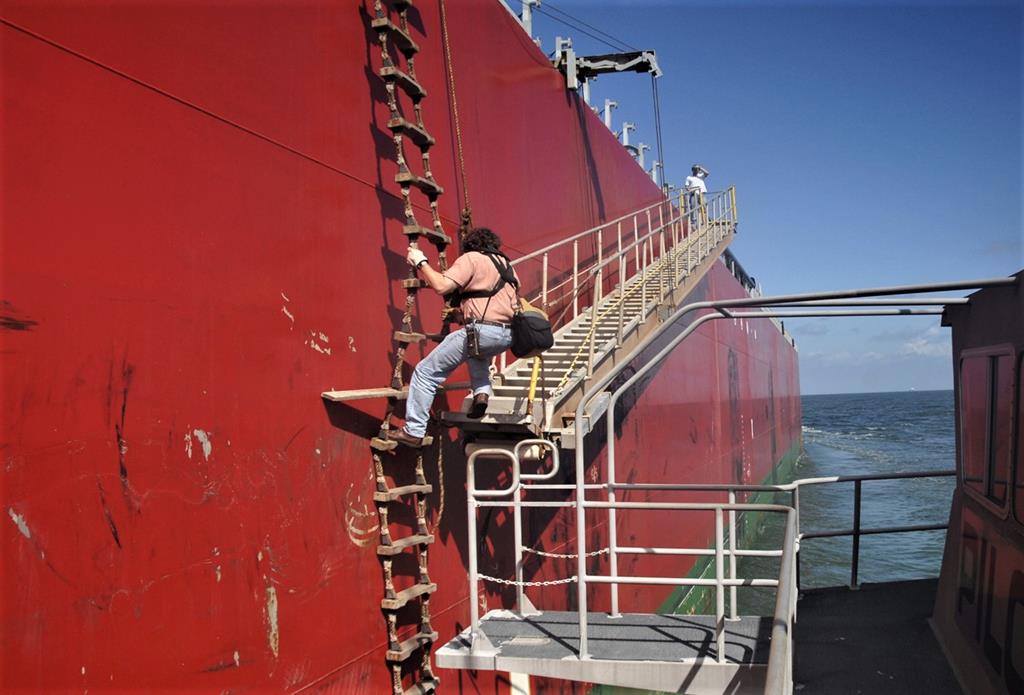 Maritime pilots trace the roots of their profession back to the ancient Greeks and Romans when incoming ship captains employed experienced local fisherman to guide their merchant vessels safely into port. It’s a legacy of skill, strength, and sharp wits, and our Houston Pilots (“Pilots”) have been meeting vessels at Galveston’s bar to carry on these proud traditions for just shy of 100 years.

The 52-mile Houston Ship Channel is home to the largest petrochemical complex in the country and the largest container port in the Gulf of Mexico. Houston ranks first in U.S. exports and first in U.S. foreign tonnage. With dedicated barge lanes and a two-way traffic system to prevent the shutdowns faced by one-way ports, the Pilots welcome more than 8,200 vessel arrivals each year through the waterway.

In their earliest days, a Houston Pilot frequently learned their trade by “coming up through the hawsepipe”, a nautical metaphor for climbing up a ship's rank structure. (A hawsepipe is a strong metal pipe through which an anchor rope passes.) Like many a fellow mariner, they began as a deck hand and worked their way up through experience and additional training. Today, however, the majority of Pilots complete post-secondary education and ten years of seafaring experience before applying to become a Houston Pilot.

Piloting ships in and out of the nation’s largest landlocked port is an enormously complex job that, in their own words, is “part art and part science”. Vessel cargoes range from chemicals to containers to cars, and everything in-between. However, the Houston Pilots don’t protect just ships from the dangers of the sly waters of the Houston Ship Channel. They also protect our people environment, and our economy, – and the training to keep fulfilling that mission is perpetual.

Among the myriad of sophisticated moves each Pilot must master is a technique known throughout the maritime industry as the “Texas Chicken” – a maneuver defines part art and part science. Relying on the wave pressure generated by an oncoming vessel to safely pass each other, the Texas Chicken works like this: at a little over one half mile apart, two vessels meeting each other on the Ship Channel alter course away from each other towards the sides of the waterway. As the vessel bows draw abeam, each vessel steadies their course, becomes parallel - then steers back into the center to proceed safely on to their destination. The Pilots safely perform the Texas Chicken maneuver every day.
Manned Model Training

Embracing technology to hone skills spearheads their training endeavors. At the Maritime Pilots Institute, a non-profit training service organization based in Louisiana, floats the MM Houston training vessel. It is a 1/25th scale neo-panamax 13,800 TEU containership. Originally commissioned by the Pilots to test dredging options for the Bayport Flare approach turn into the Bayport Terminal, the MM Houston provides manned model maneuvering practice.

The vessel is built of 3/16ths aluminum with a floating frame system that reduces the heat stress on the outer skin of the ship. The result is a well-faired hull, closely resembling Mediterranean Shipping Company and Maersk ships of her class in hull form.

“When these vessels are in this condition, they actually act as the ship does in real life. You can go out and try a maneuver and see if it works – if it’s safe to do. It’s a very valuable piece of training,” explained Captain Robert Thompson, presiding officer of the Houston Pilots.

As detailed on the Maritime Pilots Institute website, the vessel can become uncontrollable at high speeds in the facility’s open lake, due to lack of space to slow and turn before grounding. The practice conditions make the manned model a “world-class high windage experiment” for the Pilots to test maneuvers and required bollard pull from the tugs.

Interested readers can learn more about the model by visiting www.maritimepilotsinstitute.org/manned-models/mm-houston .

Feasibility and engineering design simulations at San Jacinto Maritime College - Texas Chicken maneuver.
The opening of the expanded Panama Canal in 2016 began bringing larger vessels to Houston’s port. The Pilots began to prepare for the challenges as far back as 2013, entering into a collaborative agreement with San Jacinto College to allow the college to acquire three interactive bridge simulators for professional mariner training. The goal was for the Pilots to use the simulators for research while students used them for training.

It’s a technology that fascinates. One such research session was profiled in the Houston Chronicle on August 2, 2017, when Pilot’s Captain Tom Goodwin and two tugboat captains used the simulators to explore bringing an oil tanker 900 feet long and 164 feet wide through Bayport Terminal. The simulation was used to evaluate the safety of the procedure and to determine whether a new dock could accommodate large oil tankers.

The San Jacinto College Maritime & Training Center operates 3 Kongsberg Polaris full-mission bridge simulators with an interconnected Kongsberg Neptune Engine Room Simulation suite. The full-mission bridge simulators feature 65 hydro-dynamically accurate vessels that can be operated in ten regions across the globe. With a selection of vessels that include patrol boats, tug boats, push boats, supply vessels, tankers, containers ships, cruise ships, and more, the bridge simulators can be molded to accommodate many needs. State-of-the-art software allows all three bridges to be run in the same exercise, or separately, enabling the system to be customized to specifications for unique situations.
Helo Operations

When Hurricane Rita threatened Houston not long after Hurricane Katrina devastated the city of New Orleans in 2005, an estimated two million people evacuated the area. Highways shutdown in a gridlock that lasted almost 24 hours. The nightmarish situation imparted important lessons for everyone, and in the storm seasons that followed, the Houston Pilots introduced emergency helicopter transport for their pilots between Galveston and Houston docks.

When a hurricane has entered or developed in the Gulf, the Houston Pilot Executive Committee begins assessing the vessel traffic currently in port as well as scheduled sailings and forecasted arrivals. The emergency helicopter is placed on “stand by” status with 24 hour availability.

At port condition Whiskey (72 hours prior to predicted gale force winds), the Pilots assess the path and intensity of the storm and activate their hurricane helicopter if needed. At X-Ray (48 hours), the Pilots begin handling sailings only and shuttle personnel via helicopter as needed. With a port as big and busy as Houston, it can take 24 to 36 hours to get the 60-70 vessels typically at terminal docks out of port. Vehicular traffic, especially that leaving Galveston Island, is monitored at all times.

When the port condition moves to Yankee (24 hours), the Coast Guard restricts inbound vessel traffic. The Pilots’ goal is to have all vessels departing the port with ‘pilot away’ at the sea buoy no later than 12 hours prior to predicted storm landfall. The Pilot boats are sent to safe harbor, and the helicopter evacuates Pilots as needed.

By port condition Zulu (12 hours), the port is to be cleared of vessels, facilities secured against potential threats, and all operations are to cease. Through each condition, the focus remains on protection and safety: for the Pilots, vessels and their crews, and the infrastructure/environment.

With the support of their terminal partners, the Houston Pilots practice helicopter transport measures by moving pilots during the course of their regular work in advance of hurricane season. Exercises familiarize all Houston Pilots with pre-flight helicopter safety, helicopter capabilities and limitations, and facilitate the development of landing authorization protocols with landing area owners. This summer, Pilots added vessel boarding/deboarding hoist procedures to their training agenda.

“This was our first year in learning how to hoist,” commented Captain Thompson. “This seems to be a safe and expedient way to move pilots around in heavy weather. It seems to be a very viable option.”

The aircraft utilized is a MD902 Explorer, configured for 6 passengers in addition to the helicopter pilot and flight crew. It is owned/operated by Brim Aviation , a utility helicopter organization serving both U.S. and international clients with a wide variety of services.
Continuing Legacy

Their maritime pilot forebears plying the waters near ancient Greece might shake their heads in surprised wonder at the technology used by the Houston Pilots, but they would understand the “part art, part science” approach of their fellow mariners. It’s a special skillset of a special group that transcends time, and they have safely protected the people and their port for generations. As the port region looks to the future, we can depend on the Houston Pilots to continue their legacy of skill, strength, and sharp wits on the Houston Ship Channel.

Original article on Greater Houston Port Bureau Website
What's your opinion on this?
Login or register to write comments and join the discussion!
Read more...

Video How A Pilot Boards A Ship

Video Discussion on Wind effect - drifting with no propulsion, only thrusters

On the occasion of the Maritime Safety Week (July 4-10), UK MAIB’s inspector Bill Evans refers to the issue of unsafe pilot ladders, a concern that has been regularly voiced by the industry.

The purpose of this quantitative, ex post facto study was to assess P-J fit theory by examining the relationship between personality traits, as measured by Jackson’s (1984) PRF-E, and selection for a maritime pilot job.

This movie belongs to the operation of ships with POD propellers and discusses the approach for using a vector model from only the pods’ thrust forces as resulting force to imagine the potential effect of the pods on manoeuvring motion.

Tero Vainio has been appointed Finnpilot's Chief Technology Officer CTO). He will take up his position on 4 January 2021.

Great film about sailing on Kiel Canal (NOK) in Germany.

Opinion What is a Tug's Bollard Pull and How İt is Calculated?
103