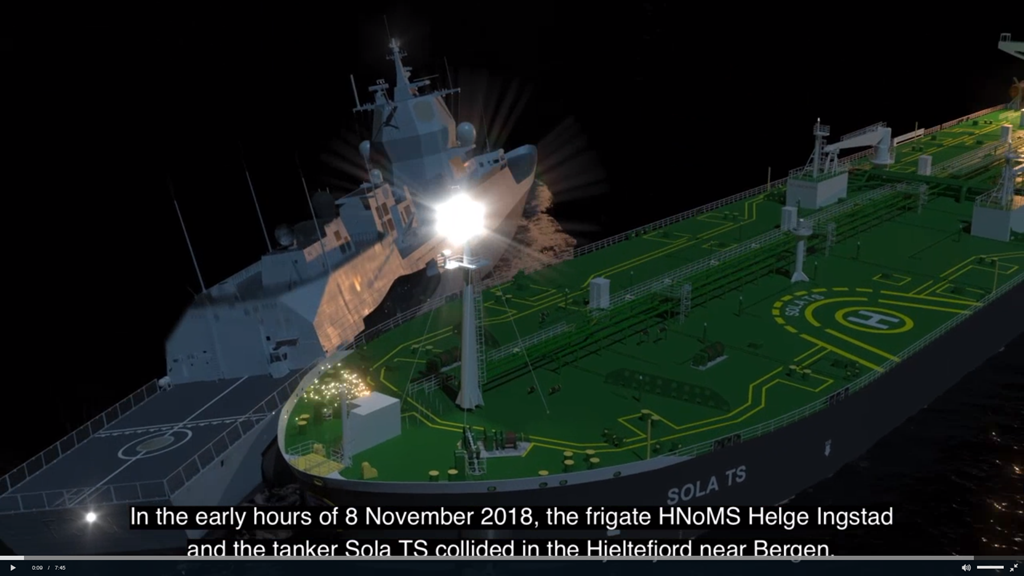 The frigate HNoMS Helge Ingstad and the tanker Sola TS collided in the Hjeltefjord in the early hours of 8 November 2018. The frigate had 137 persons on board with a mix of conscripts and permanent crew. A total of seven watchstanding personnel were present on the bridge, including two trainees. The tanker Sola TS was operated by the Greek shipping company Tsakos Columbia Shipmanagement (TCM) S.A. There was a total of 24 persons on board. The bridge was manned by four persons, including the pilot.

HNoMS Helge Ingstad sailed south at a speed of approximately 17–18 knots with the automatic identification system (AIS) in passive mode, i.e. no transmission of AIS-signal. The frigate’s bridge team had notified Fedje Vessel Traffic Service (VTS) of entering the area and followed the reported voyage. Sola TS had been loaded with crude oil at the Sture Terminal, and notified Fedje VTS of departure from the terminal. Sola TS exhibited navigation lights. In addition some of the deck lights were turned on to light up the deck for the crew who were securing equipment etc. for the passage.

In advance of the collision, Fedje VTS had not followed the frigate’s passage south through the Hjeltefjord. The crew and pilot on Sola TS had observed HNoMS Helge Ingstad and tried to warn of the danger and prevent a collision. The crew on HNoMS Helge Ingstad did not realise that they were on collision course until it was too late.

HNoMS Helge Ingstad suffered extensive damage along the starboard side. Seven crew members sustained minor physical injuries. Sola TS received minor damages and none of the crew were injured. Marine gas oil leaked out into the Hjeltefjord. The Institute of Marine Research has ascertained the effect of the oil spill had little impact on the marine environment.

The AIBN’s investigation has shown that the situation in the Hjeltefjord was made possible by a number of operational, technical, organisational and systemic factors:

As a consequence of the clearance process, the career ladder for fleet officers in the Navy and the shortage of qualified navigators to man the frigates, officers of the watch had been granted clearance sooner, had a lower level of experience and had less time as officer of the watch than used to be the case. This had also resulted in inexperienced officers of the watch being assigned responsibility for training. Furthermore, several aspects of the bridge service were not adequately described or standardised. The night of the accident, it turned out, among other things, that the bridge team on HNoMS Helge Ingstad did not manage to utilise the team’s human and technical resources to detect, while there was still time, that what they thought was a stationary object giving off the strong lights, in fact was a vessel on collision course. Organisation, leadership and teamwork on the bridge were not expedient during the period leading up to the collision. In combination with the officer of the watch’s limited experience, the training being conducted for two watchstanding functions on the bridge reduced the bridge team’s capacity to address the overall traffic situation. Based on a firmly lodged situational awareness that the ‘object’ was stationary and that the passage was under control, little use was made of the radar and AIS to monitor the fairway.

When Sola TS set out on its northbound passage with the forward-pointing deck lights turned on, it was difficult for the frigate’s bridge team to see the tanker’s navigation lights and the flashing of the Aldis lamp, and thereby identify the ‘object’ as a vessel. The shipping company Tsakos Columbia Shipmanagement SA had not established compensatory safety measures with regards to the reduction of the visibility of the navigation lights due to deck lighting. Furthermore, radar plotting and communication on the bridge did not sufficiently ensure the effect of active teamwork to build a common situational awareness. This could have increased the time window for identification and warning of the frigate.

The Norwegian Coastal Administration (NCA) had not established human, technical and organisational barriers to ensure adequate traffic monitoring. The functionality of the monitoring system with regards to automatic plotting, warning and alarm functions, was not sufficiently adapted to the execution of the vessel traffic service. Lack of monitoring meant that the VTS operator’s situational awareness and overview of the VTS area were inadequate. Hence, Fedje VTS did not provide the vessels involved with relevant and timely information and did not organise the traffic to ensure the tanker’s safe departure from the Sture Terminal.

On the southbound voyage, HNoMS Helge Ingstad sailed with AIS in passive mode. This meant that the frigate could not be immediately identified on the screens at Fedje VTS or Sola TS. None of the parties involved made sufficient use of available technical aids. It was a challenge for maritime safety that the Navy could operate without AIS transmission and without compensatory safety measures within a traffic system where the other players largely used AIS as their primary (and to some extent only) source of information.

Download Report
Video presentation
Summary report
What's your opinion on this?
Login or register to write comments and join the discussion!
Read more...

CHIRP Maritime has published the 2020 Annual Digest. The Digest contains all articles that were published in the quarterly editions of their FEEDBACK magazine.

Article An Analysis of Pilotage Marine Accidents in Korea (2019)

Since the late 2000s, a debate has been sparked on the most suitable age of retirement for Korean pilots. The debate has focused on the extension of retirement age of pilots from 65 to 68 and whether this will affect the probability of marine accidents.

The Master and pilot are dependant on each other for a safe and successful beginning or end of a voyage. They are both operating in a foreign environment.

One of the biggest ships in the world, 23,000+ TEU container ship MSC MIA, reportedly contacted gantry crane while leaving container terminal at Valencia.