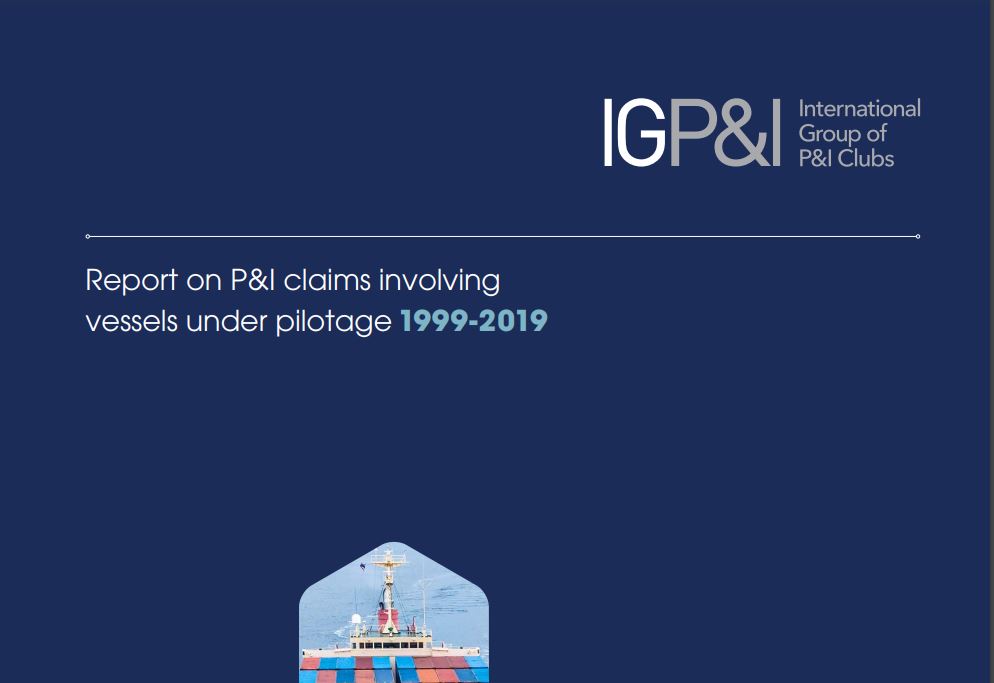 The International Group of P&I Clubs has published a new report on pilotage:

Whilst there is volatility in the number and severity of incidents in each year, the yearly average of 52 incidents equates to one incident per week, and the average value per incident is approximately US$1.74m. Whilst the overall cost is substantial, the number of incidents is however very small in comparison with the overall number of acts of pilotage undertaken every year.

The report considers incidents in four categories – Allision/Contact with Fixed or Floating Objects (FFO), Collision, Grounding, and Navigation, the latter category encompassing incidents such as those caused by the wash of a vessel.

Although the report is focused upon data in the Clubs’ underwriting years up to and including 2018, there is comment upon some limited data for 2019. This is because of the severity of three incidents in that year, all of which involve contacts between container vessels and gantry cranes. There have in addition been two more recent incidents of a similar nature notified to the IG Pool for the 2020 underwriting year. The berthing of large container vessels is identified as an area of focus for further work.
The yearly average of 52 incidents equates to one incident per week, and the average value per incident is approximately US$1.74m.

This graphic depicts the overall cost of Allision and FFO incidents each year. Information for 2019 has been included because of the substantial cost of such claims in that year. The hatched area in the column for 2019 reflects the known claims experience for that year which is not yet included in the data reported to the IG. The volatility in 2007 has already been commented upon. Between 1999 and 2012 there is an upward trend which then declines markedly between 2012 and 2016. Since 2016 the trend has been upwards, and that trend is particularly marked if the more complete total for 2019 is included.

Get the full report here:

Get the full report here

On the night of January 1, 2019, MSC Zoe lost approximately 290 containers in heavy weather on the journey from Portugal to Bremerhaven. The loss of so many containers is an exceptional event and is the second largest known container loss of a ship due to heavy weather.

Look at Life - Report on a River - The River Thames - 1963, UK
This video is in the Look at Life series - Volume One - Transport and shows the River Thames from its source to the sea. In the hey-day of British Shipping and what has been done and looking to the future to modernize the port services to keep the traffic moving.

ABB, together with Singaporean shipyard Keppel Offshore & Marine (Keppel O&M), has successfully carried out South Asia’s first remote joystick control of a tugboat in the busy Port of Singapore.
The Port of Singapore, with more than 130,000 vessels calling annually, presents one of the most complex settings for autonomous harbor operations in the world. The trial marks a major milestone in validating the increased safety and efficiency of tug operations utilizing digital solutions already...

Language ENGLISH!
MARIN has done model tests with a model of the msc Zoe in one of its test facilities, to find out what caused the msc Zoe to lose containers and how we can prevent this in the future.

by Marine-Pilots.com - published on 4 September 2019

To better bundle all articles and messages about Marine / Maritime Pilots I would like to suggest the Hashtag #MARINEPILOTS. We can use it well here on LinkedIn, but also for other social media like Twitter.