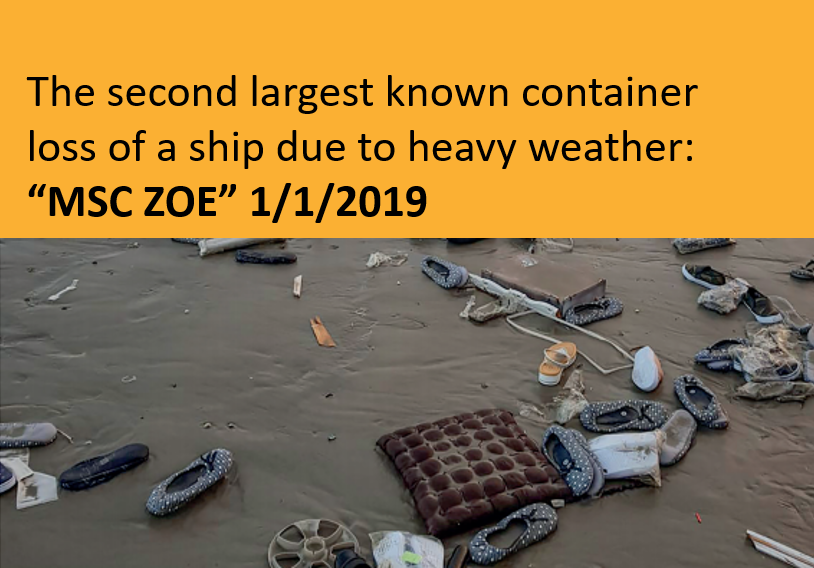 On the night of January 1, 2019, MSC Zoe lost approximately 290 containers in heavy weather on the journey from Portugal to Bremerhaven. The loss of so many containers is an exceptional event and is the second largest known container loss of a ship due to heavy weather. Only Svendborg Maersk lost more, 517, in 2014.

Recommendations (Dutch Safety Board Final Report)
Minimizing the risks of container loss on the two shipping routes north of the Wadden Islands requires an integrated approach by the parties involved: the container shipping sector, the IMO and the Dutch government. In the international investigation into the course of events of the accident with the MSC ZOE and this investigation into the risks on the shipping routes north of the Wadden Islands, recommendations are made to prevent container loss near the Wadden area. The recommendations of both studies must be
considered in conjunction.

1. the design requirements for lashing systems and containers,
2. the requirements for loading and stability of container ships,
3. obligations with regard to instruments providing insight into roll motions and accelerations, and
4. the technical possibilities for detecting container loss.

Recommendations are also made to the German and Dutch governments to investigate, in cooperation with Denmark, the need for additional measures on these shipping routes or adjustments to the routes and to submit a proposal to the IMO on the basis thereof. In addition, the shipping company of the MSC ZOE is instructed to explicitly draw the attention of crews sailing in this area to the route-specific risks, and to equip and load their ships in such a way that the loss of containers is prevented. Finally, through the World Shipping Council and the International Chamber of Shipping, the international maritime sector is called upon to actively communicate the safety lessons from the investigation and to take the lead in drafting safety requirements and in the innovation of ship design and container transport in order to minimize the risk of container loss, also in conditions such as near the Wadden area.

The recommendations that emerge from the investigation into the shipping routes are aimed specifically at Dutch parties and are listed below.

To the Minister of Infrastructure and Water Management

1. In collaboration with the Wadden states Germany and Denmark, take the initiative for a specific proposal to the IMO with measures for international container shipping to prevent the loss of containers on both shipping routes north of the Wadden Islands. This can for example take the form of a review of technical standards, the introduction of restrictions, recommended routes, precautionary areas, traffic control and/or information provision. Make particular use of the status of the Wadden Sea as a Particularly Sensitive Sea Area (PSSA) and the possibilities within the IMO standards for taking measures to protect a PSSA. Make use of the outcomes of this investigation and other investigations into route-specific risks (also see commendation 5).

Short-term approach
Decision-making by the IMO is a lengthy process. Therefore, out of precaution to protect the Wadden Sea, the Netherlands itself must take immediate measures parallel to that process within the existing legal framework to minimize the risks of loss of containers. Above all, the container shipping sector itself has a social responsibility to prevent the loss of containers, certainly in the vicinity of the Wadden Islands, but also elsewhere.

To the Minister of Infrastructure and Water Management

2. Inform shipping companies and masters of large container ships in a structural manner about the four hydrodynamic phenomena that emerged from this investigation, which can occur in the event of high beam seas on both shipping routes north of the Wadden Islands. In providing this information, also make it clear that these phenomena and combinations of these phenomena can generate forces on large, wide and stable container ships which can result in the loss of containers. If further route-specific risks emerge from other investigations, shipping companies and masters should also be immediately informed of those outcomes.

3. Grant the Netherlands Coastguard the tasks, authorities and resources it needs to monitor container ships so that ships can sail safely past the Wadden Islands in all wave and weather conditions. With this in mind, investigate the possibilities for traffic control of container ships, such as establishing a VTS area, actively disseminating warnings to shipping about prevailing weather and wave conditions in the Dutch part of the North Sea and innovating the way such information is provided. Involve the Netherlands Coastguard and Rijkswaterstaat in defining this role and responsibility. Also seek cooperation and/or harmonization with Germany on the intended tasks.

4. Actively communicate the lessons learned from this investigation and the international investigation into the course of events and in your national and international networks, take up a pioneering role in reaching agreement on and disseminating the principles and industry standards that promote the safety of container transport close to the Wadden area.

Insight into route-specific risks north of the Wadden Islands
The risks revealed by this investigation relate to a scenario for large, wide and stable container ships. Further investigation is necessary to also chart out these risks in other conditions and for other types of (container) ships besides Ultra Large Container Ships like the MSC ZOE. The first steps for this follow-up investigation have already been taken by the Ministry of Infrastructure and Water Management. These must be followed up further.

To the Minister of Infrastructure and Water Management (KVNR)

6. Make a periodic risk analysis of the route-specific risks that can lead to container loss on the shipping routes close to the Wadden Islands, with a view to the safety of shipping and protection of the North Sea and the Wadden area, and include this analysis as a fixed element of North Sea policy. Under all circumstances, make use of a system of monitoring and analysis of shipping incidents and near misses on these shipping routes. Also include developments in shipping such as economies of scale, changes in the picture of shipping traffic and (future) changes to infrastructure and area activities on the North Sea.
What's your opinion on this?
Login or register to write comments and join the discussion!
Read more...

Language ENGLISH!
MARIN has done model tests with a model of the msc Zoe in one of its test facilities, to find out what caused the msc Zoe to lose containers and how we can prevent this in the future.

This report on incidents involving vessels under pilotage, is an update on that issued in 2006. The IG’s first report examined five years of data between 1999 and 2004.

This video shows the reality of pilots in Kenya.

Video Pilot on Board