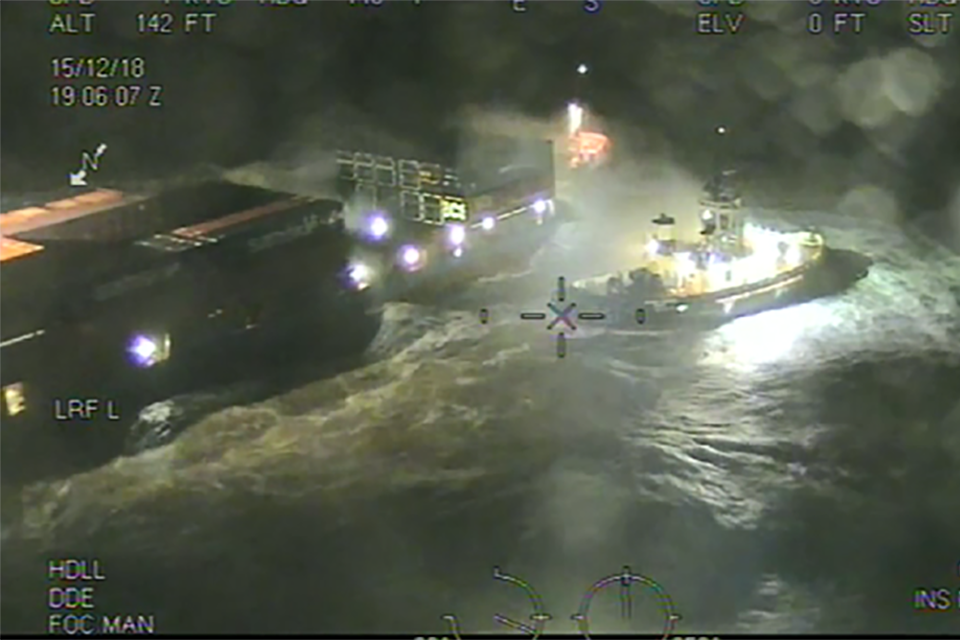 On the evening of 15 December 2018, while approaching the Humber pilot station the container feeder vessel Thea II suffered an engine failure and had to anchor to await tugs to tow it into harbour. In storm force conditions, the container vessel dragged its anchor towards the Binks Shoal. Unfortunately, both Thea II and the tug, Svitzer Josephine, ran aground before it could be towed clear. Later that night both vessels refloated with the tide. Svitzer Josephine was able to return to harbour under its own power. After some delays while the ship managers tried to negotiate contractual terms with another tug operator, Thea II was towed clear of the bank and was eventually towed into Hull two days later. There were no injuries and no pollution.

Meet the weather our crews and the RNLI faced when the Thea II grounded
What's your opinion on this?
Login or register to write comments and join the discussion!
Read more...

Meet the weather our HM Coastguard Humberside helicopter, RNLI - Humber Lifeboat Station and emergency tugs faced on Saturday when the Thea II grounded. The good news is that she refloated without any pollution reported and has now berthed safely into King George Docks, Hull where she awaits a visit from our MCA surveyors and the Marine Accident Investigation Branch #allsafe

Bulk carrier COFCO 1 with 41,900 tons of soybean resumed sailing downstream after grounding, which took place on May 25-26, but at around 0630 UTC May 27 she ran aground again, this time in San Pedro area at 269 kilometer mark, Parana river.

Recently, Svitzer took an important step towards strengthening its presence in Africa by signing a five-year contract with Nacala Logistics in Mozambique for harbour towage, occasional pilot transfer and potential salvage work in the port of Nacala. At the same time, Svitzer also secured a five-year extension of its current contract with Egyptian LNG assisting the land-based Idku LNG plant with four tugs, two mooring boats and one pilot boat.

A Port Otago deckhand was seriously injured in a workplace fall yesterday afternoon.

Port Otago chief executive Kevin Winders said the deckhand on a pilot boat was preparing a ladder to allow a maritime pilot to climb aboard an oil tanker.

Article Qastor 3 is now available - win a one year licence!

QPS is pleased to announce that Qastor 3 is now available on iOS and Windows.

This brand new version of Qastor is a multi functional navigation platform, which has been developed, designed and tested in cooperation with world-class pilots. Explore straightforward navigation software with optimal docking and piloting capabilities.

The last month Jan Tiedemann from Alphaliner (BRS) in Hamburg has reported, that DNV GL has awarded Hudong Zhonghua Shipbuilding (group) Co., Ltd. an approval in principle for the design of an LNG-powered 25,000 TEU container vessel. Based upon the reported vessel dimensions, he reckons that the ship could actually have a capacity closer to 26,000 TEU.

Opinion Column I keeping the Pilot safe (by Michael Grey)
213