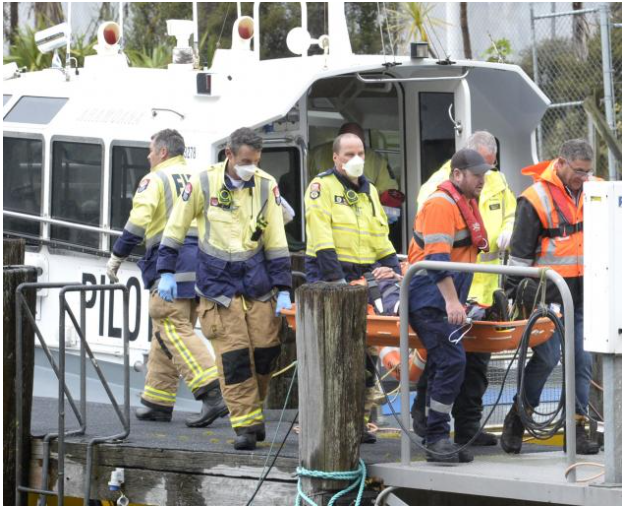 A Port Otago deckhand was seriously injured in a workplace fall yesterday afternoon.
Port Otago chief executive Kevin Winders said the deckhand on a pilot boat was preparing a ladder to allow a maritime pilot to climb aboard an oil tanker.

During that process, the deckhand, who was tethered to the pilot boat, fell backwards on to the boat and hurt his back, Mr Winders said.

Port Otago staff took the man to Careys Bay where he was met by emergency services staff and transported to Dunedin Hospital.

Maritime New Zealand had been notified of the incident, and the port company would work with the government agency during the course of any investigation, Mr Winders said.

"Obviously, our focus at the moment is looking after our team member, and then we’ll be working through an investigation, and work through the root cause, and understand what’s happened."

A St John spokeswoman said it was notified of the incident and attended the scene about 3.45pm.

St John sent one ambulance and transported one patient to Dunedin Hospital in a serious condition, the spokeswoman said.

They finally completed cutting the 1st section (the bow) and transported it via barge to Brunswick Ga. The Golden Ray (a vehicle ship) capsized on 9/8/2019 and is being cut and dismantled to remove it from St Simons Channel, St Simons Island Ga. Thanks for watching and don't forget to subscribe for more videos.

According to "Buchan Observer": Peterhead Port Authority has introduced remote pilotage for selected vessels entering the harbour as part of a package of measures designed to reduce the risk of staff and users contracting the Covid-19 virus.

by Marine-Pilots.com - published on 5 November 2020

Port authorities in Antwerp, Belgium, are making use of EMSA’s Remotely Piloted Aircraft System (RPAS) to support their day-to-day monitoring of port operations and rapid response to pollution incidents in the port area. The RPAS will enable the authorities to inspect at a distance their complex port environment which extends over an area of some 120km².

CHIRP Maritime has published the 2020 Annual Digest. The Digest contains all articles that were published in the quarterly editions of their FEEDBACK magazine.