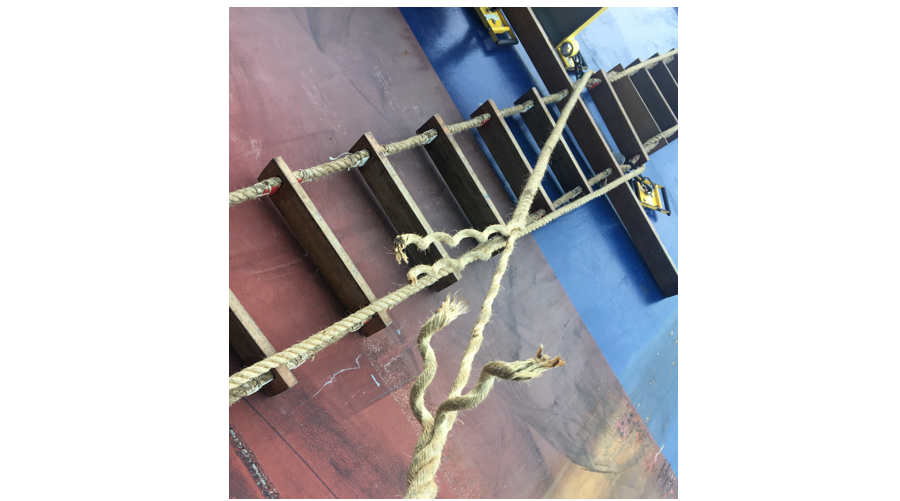 Photo and text by AMSA

Whenever a pilot or other person embarks or disembarks from a ship by ladder, they entrust their safety to the pilot transfer arrangements provided by the ship and the pilot boat crew.

The requirements in SOLAS V/23 are the minimum standards for equipment installed and arrangements for pilot transfers on ships on or after 1 July 2012. The IMO standards can be found in:


SOLAS V/23.2.3 also states a pilot ladder shall be certified by the manufacturer as complying with SOLAS V/23 or “with an international standard acceptable to the Organization” and refers to ISO 799:2019 “Ships and marine technology – pilot ladders”.

Compliance with this particular provision of SOLAS V/23 can be met when a manufacturer has certified the pilot ladder complies with either of the above standards, noting they are not identical.

Paragraph 10.1 of Part A of the International Safety Management Code (ISM) requires vessel operators establish procedures to ensure a ship is maintained in conformity with the relevant rules and regulations, including pilot transfer arrangements. Such procedures should include regular inspections of the pilot transfer arrangement and storage of such equipment when not in use.

To read the full notice here.

Login or register to write comments and join the discussion!
BW
Bill Woodhouse USA
There have been far too many tragedies due to these flawed boarding systems. More will certainly happen in the future unless changes are made.
0
Read more...

Today is the beginning of IMPA´s 2020 Safety Campaign survey, and we would like to encourage you all to participate!

As my colleagues know, IMPA conducts a “safety campaign” in the fall every year. The 2022 safety survey report was released a few days ago. First of all, we would like to thank the pilots who participated in this survey from all over the world.

The United Kingdom Maritime Pilots Association (UKMPA), is the representative professional body for Maritime Pilots in the United Kingdom. Almost every ship entering or leaving a port, is required under UK law to engage a duly Authorised Maritime Pilot, who either boards the vessel in port or at sea and takes conduct of the safe navigation of that vessel. This undertaking is critical to protecting the country’s national infrastructure and environment from damage or pollution, supporting the UK’s economy, and ensuring the safe, timely and efficient movement of all trade.