Docking Pilot’s Actions Cited in Probable Cause of Allision 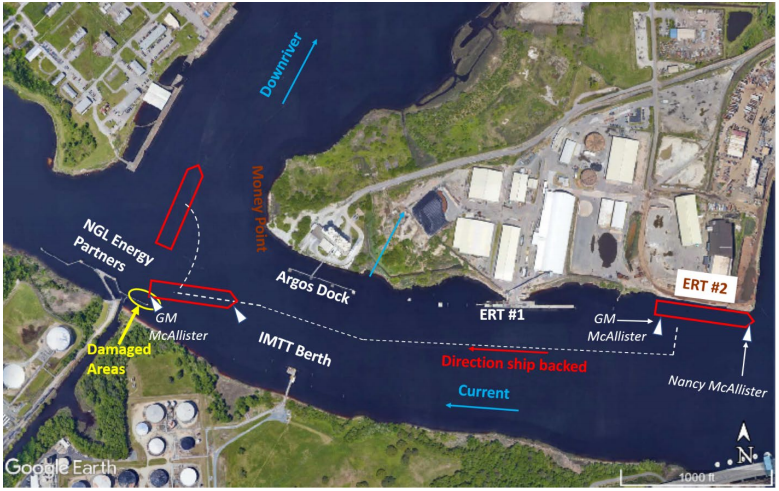 Text and Photos by NTSB

No injuries or pollution were reported in connection with the accident. Damage to the wharf was estimatedat $1.47 million.

he undocking and transit to sea of the bulk carrier Ijssel Confidence was conducted with two 4,000-horsepower tugboats, the G.M. McAllister and the Nancy McAllister. After the ship left the berth, it proceeded downriver astern in a general westerly direction toward the turning basin, with the engine dead slow astern and the rudder midship. As the Ijssel Confidence approached the turning basin where the river started to bend northwest, the vessel’s astern speed continued to increase and its course over ground remained in a westerly direction. As the docking pilot attempted to slow the ship, the vessel moved towards to the south side of the river, away from Money Point, and the G.M. McAllister struck the NGL Energy Partners berth. During the NTSB’s investigation, both tugboat captains stated the Ijssel Confidence was moving too fast for the tugboats to work effectively.

The docking pilot was an experienced former tugboat captain and mate. He had docked and undocked hundreds of ships in the accident area of the river, mostly using tractor tugboats. Conventional tugboats, like those involved in this accident, are less maneuverable than tractor tugboats. In this accident, the docking pilot neglected to take into account the conventional tugboats’ reduced effectiveness and the additive effect to the ship’s speed.

The NTSB determined the probable cause of the contact of the G.M McAllister with the NGL Energy Partners berth was the docking pilot backing down the river toward the turning basin at a speed at which the assist tugboats could not be effectively used.
Download Marine Accident Brief 20/37

Riccardo di Stefano Germany
Hi Gajanan, please click on the link below the article to download the PDF.
0
GK
Gajanan Karanjikar India
do we have the full report???
0
Read more...

The U.S. National Transportation Safety Board (NTSB) has released a Marine Accident Brief about an accident that occurred in March 2019, involving the towing vessel Dixie Vandal, noting that the BNWAS alarm didn't prevent the fatigued pilot from falling asleep.

Some ship handlers today use electronic instruments from start to finish and these ships usually have powerful engines and thrusters and an almost unlimited number of personnel on the bridge.