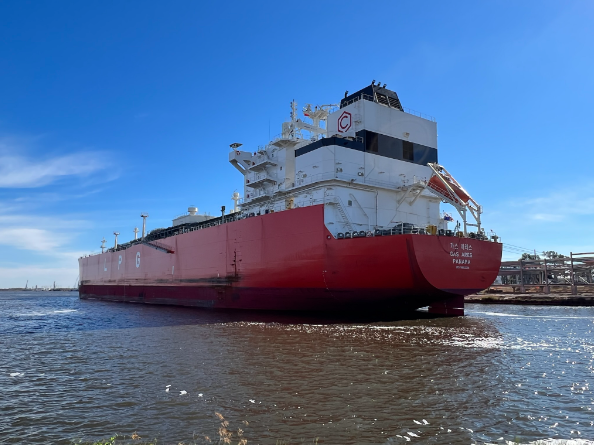 A state licensed pilot from the Sabine Pilots took navigational control of the Gas Ares as it was heading to a loading dock on the Neches River. Due to wind conditions, the pilot planned to have an escort tug for the transit through the Sabine Neches Canal and Neches River.

After the pilot arranged a passing with a tow, the pilot ordered the Gas Ares to dead slow ahead to avoid making a wake as the carrier passed a pipeline removal project to starboard near the shoreline (outside of the navigation channel). Winds were strong on the carrier’s starboard side, slowly setting the vessel—which was already on the left side of the 400-foot-wide channel for the passing arrangement with the tow—further toward the left side of the channel toward vessels moored at docks on that side of the channel.

With the reduction of the ship’s speed, the Gas Ares’s rudder became less effective, and was not able to move the vessel to starboard and away from the moored vessels on the left side of the channel by rudder and engine alone or by using the escort tug to pull on the vessel’s starboard quarter. Without enough headway, the pilot was unable to steer the vessel back to the center of the channel and avoid striking the outboard moored tug.

The NTSB determined the probable cause of the collision was the pilot’s decision to reduce the vessel’s speed in order to create less wake when passing a pipeline removal project, causing a loss of rudder effectiveness in strong crosswinds that set the carrier toward moored vessels.

Login or register to write comments and join the discussion!
HH
Henk Hensen Loodswezen - NEDERLANDSE LOODSENCORPORATIE, Netherlands
With the ship drifitng to port, was it the right decision to have the stern tug pulling to starboard?
0
Read more...

Boarding Accident Claims Marine Pilot's Life off Yalova, Turkey. Maritime-Executive.com as well as Seanews.com.tr report unanimously on the death of a Turkish pilot

Video What happens during a snapback event?

Case Study Video:
BHP - a global mining company and port owner – asked us to develop a test set-up to see what happens during a snapback event and evaluate their safety protection fence. The test data helped in the development of a safer protection fence and gave real insight into snapback behaviour.
Collaboration with BHP, Geobrugg and Wilhelmsen.

According to a post of Paulo Ekkebus on LinkedIn (10th July 2020): "The Pacific Pilotage Authority Canada is looking for a CFO. Great opportunity for an individual to join an amazing company."

Opinion What is a Tug's Bollard Pull and How İt is Calculated?
516