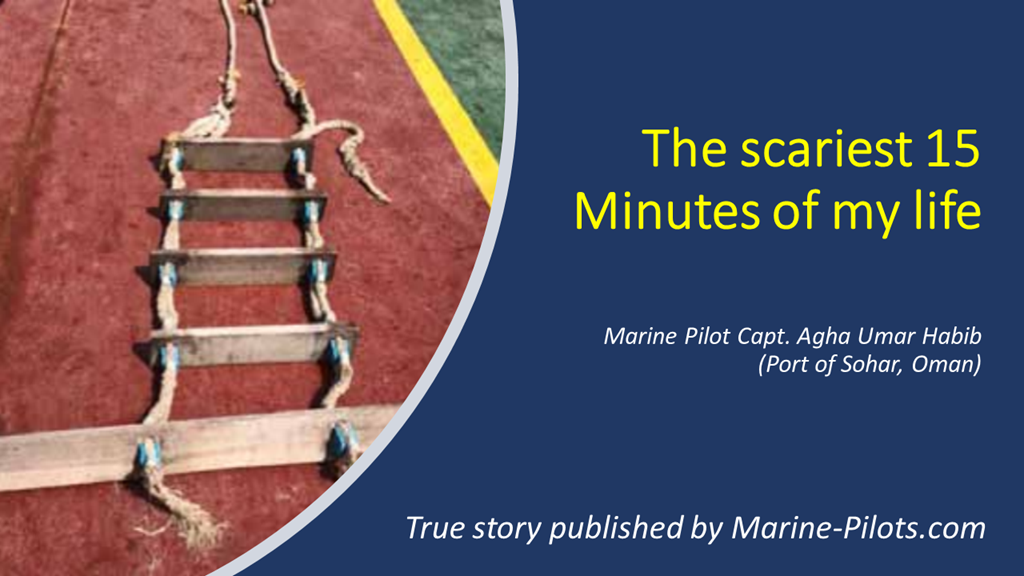 I thank you God
My fall in the water on July 23rd, 2019 was an event which re-affirmed my faith in God. Something I had to bear for someone else’s negligence. I was gratified to my God for not inflicting any mental or bodily harm to me.

The pilot ladder broke - How it happened
I am a Marine pilot in the Port of Sohar, Oman with an experience of more than 13 years in this technical field of pilotage. During my night shift on 23 July 2019 I was on Pilot boat Svitzer, Al-Kharara, to board on m.v. Opal Fortune at 0130 hours. Like any regular day, I geared up as per international safety standard and departed the pilot boat by stepping on the pilot ladder. But, as soon as I stepped on the 3rd step of the pilot ladder I heard rattling voice with the most horrifying realization of falling into the sea due to the broken ladder, which started tumbling down with me resulting into my fall between the ship and the pilot boat.

I swam for my life in darkness
The inflation of life jacket jolted me to the severity of the situation and my instant reflux was to open my both arms to avoid crushing between pilot boat and the ship. This effort gave some scratches on both of my hands. Once I resurfaced, I saw the Ship’s propeller behind me. Immediately I started to swim away from it, as it was churning slowly. By my deliberate and conscious swimming, I was nearly able to miss the propeller. During this swimming effort, I realized that my backpack was hindering my efforts and sinking me down so I immediately took off my bag.

My lucky rescue
Though it was pitch dark but I spotted the broken pilot ladder and a lifebuoy floating beside me. I swam towards the buoy and held it tightly. In the meantime, I saw that pilot boat had turned around and was searching for me. I started shouting “ Ali..Ali” to the crew on pilot boat. This made it possible for the boat crew to locate my position and they went inside the boat to update the Captain (Abu Shaker) regarding my position in water. The Captain tried to bring pilot boat beside me and he succeeded in second attempt. They threw a rope to me which I tied to my arm. After that they pulled me toward the aft of the pilot boat. I used the ladder to climb up the pilot boat. I was later taken to the hospital by the officials and was very well taken care. Presence of my Harbour master and colleagues at the hospital at that hour of the night, was very humbling. I felt much relaxed in their presence. My family was also updated by them which made it easy for them to reach me.

The scariest 15 minutes of my life
Those 15 minutes in the sea, were the scariest of my life as I was not sure of what will happen next or even if I would survive! God’s special blessing it was!!! Thanks to the bearable temperatures of the water in the Gulf of Oman, its low swell and quick response of the pilot boat captain, who switched off its propeller immediately upon seeing me falling, I was able to survive this accident unharmed, which could have proven fatal.

It can happen to any Marine Pilot - Every day
The accident is over and I was back on duty the next day, but a lot of questions need to be answered and many concerns need to be addressed for the safety of marine pilots all over the world and for the risk involved in this profession. These men are no less than heroes who work day in day out and risk their lives to keep the world’s shipping moving. Are the safety standards on ships, facilities for pilots and international regulations to regulate the whole process worth the risk? Think about it!

Story by Capt. Agha Umar Habib (Port of Sohar, Oman)
What's your opinion on this?
Login or register to write comments and join the discussion!
Read more...

by www.MaritimeBulletin.net - published on 18 January 2020

According to a report today by www.MaritimeBulletin.net a mooring boat was rammed from a container ship and sunk.

Video upload on 02/01/2020 by TVBS NEWS
We do not put videos of accidents on our website out of voyeurism. We would like to point out that the work of a pilot is always dangerous, especially when embarking and disembarking!
These incidents should be a warning. It can hit anyone out of carelessness.
Dear pilots, please always be mindful and always think of your safety!

Video Saving Lives of Maritime Pilots with a Simple Action