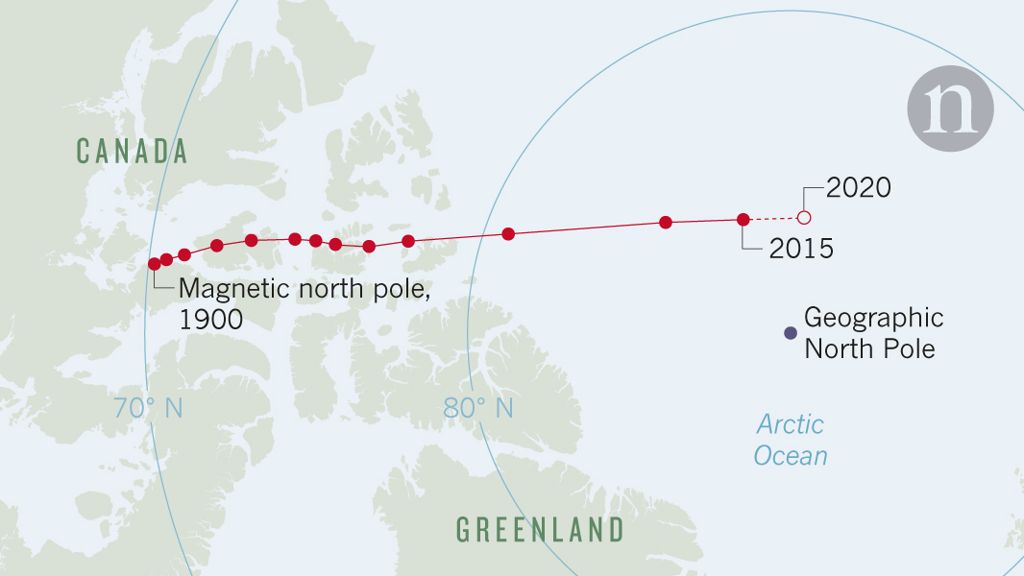 Since the turn of the millennium 55 km per year

A compass has to be calibrated regularly, because the magnetic field of our Earth, on which the compass is oriented, constantly changes slightly and deviates from place to place. The corrections are especially important for captains and pilots in high latitudes. Elsewhere it does not matter so much when the compass is pointing not exactly to the north, to the point around which the earth revolves, but to the magnetic pole nearby. Ships and aircraft in the Arctic are particularly dependent on the most accurate navigational data possible.

The Arctic magnetic pole, for example, is located near the geographic North Pole, and it changes its position noticeably every year. For this reason, experts must constantly adapt the model used for compass correction. Now, however, the World Magnetic Model has been temporarily revised. It is being produced by the National Geophysical Data Center (NGDC) in the USA in cooperation with the British Geological Survey (BGS) in the United Kingdom.


Official corrections so far are in a five-year cycle

Normally, the magnetic model of the Earth is revised every five years. The latest version is from 2015, so a new release of the data would have been necessary by the end of this year. But because the pole is moving so fast, the researchers found themselves forced to act faster.


By the end of 2019, there will be the next revision on the regular schedule.

Since the first positioning in 1831, the Arctic magnetic pole has already moved by 2300 kilometers - and it continues to move. Since the turn of the millennium, the speed has been around 55 kilometers per year. It is traveling from the area of the Canadian Arctic Islands across the central area of the Arctic Ocean towards Siberia.


The liquid earth core allows the magnetic pole to migrate

The reason for the migration of the magnetic North Pole lies in the interior of the earth. There, movements in the liquid part of the earth's core cause the magnetic field to form, and researchers speak of the so-called geodynamo. And these movements of molten iron and nickel vary minimally over time - causing the pole to migrate.


The next pole reversal will come

The polarity of the field has been reversed repeatedly in the past, which can be demonstrated by rock samples. Currently, its strength is weakening, which could be an indication of a so-called pole reversal. On geological scales, this event is overdue, so to speak, the last time it occurred was 780,000 years ago. The question is not whether, but when the next pole reversal will take place.

Login or register to write comments and join the discussion!
RC
Roger Carey United Kingdom
Magnetic compasses don't have to be calibrated regularly because of the movement of the magnetic pole.They will always point at magentic north, wherever it is. The are compensated to account for the natural magnetic field which exist in the vessel in which they are installed, and that compensation should be checked regulalry. Navigational charts always show the amount of variation of Magnetic North from True North, and always indicate the estimated annual rate of movement, east or west of True North. That estimate would have to be revised when mag north moves faster or slower than expected, and would be applied as a chart amendment, or when the chart is reprinted.

The Maritime Pilots Institute is the premier training facility for River Pilots employing a mix of virtual and real world facilities. Located in Covington Louisiana, we are 45 minutes from downtown New Orleans while offering the safety and amenities of small town life.
The training presents a balance between simulated locations with a variety of environmental conditions and manned scale models of cargo ships in a series of lakes with docking and currents and live factors such as wind and...

Serious Injury to Pilot delves into a real-world incident that resulted from a lack of attention to detail. A pilot falls from a ladder due to negligence.
Visit https://maritimetraining.com/Course/Serious-Injury-to-Pilot to purchase the full-length version.

This is the recording of the presentation with the title:
“Digital Twins" as Key Maritime Technology Innovations for MET - and for Operation of Intelligent Ships
It was held at the MET Training Course by Shanghai Maritime University on Oct 27 2020 on the occasion of IMLA 40th anniversary

Stabilisers are used to reduce the amount of roll experienced by large ships.
In this video, we look at a few different stabilisation techniques. We investigate how different methods work and how successful they are at reducing a roll.

This book investigates the science behind each component of manoeuvring a ship in confined waters, especially in port limits and the art to master it. Based on practical observations and analysis of each major and minor aspect of the manoeuvring of different types of vessels in different types of situations, this book put all relevant knowledge together for the reference of all concerned with pilotage and ship handling.

Article Education And Training Of Pilots In The Netherlands
466