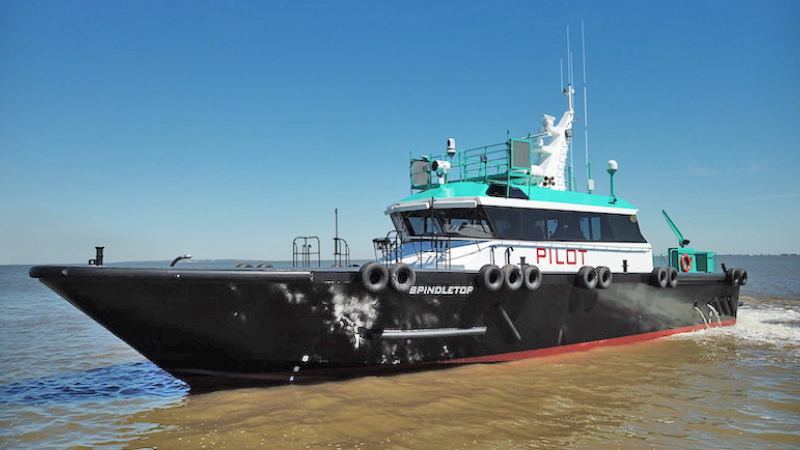 Text and photo by Humphree

Breaux’s Bay Craft, Loreauville, La., delivered the new 90’x23’x12’4″ aluminum pilot boat Spindletop to the Sabine Pilots on March 6. The Sabine Pilots, Port Arthur, Texas, serve the Texas ports of Orange, Port Arthur and Beaumont. “This is the biggest pilot boat built in the U.S.,” said Roy Breaux, the shipyard’s owner. “There are bigger ones in other parts of the world, but this is the largest in the U.S.”

Breaux’s Bay Craft has specialized in building aluminum offshore crewboats for decades. However, the shrinking of the oil and gas industry in the Gulf of Mexico and the pandemic have forced the shipyard to further diversify. “We have produced hundreds of pilot vessels in the past, but we delivered our first pilot boat with the New Generation Deep-V bottom to the Tampa Bay Pilots Association, a 54-footer, in November 2019,” said Breaux. “This same bottom was used on the Spindletop.”

Designed by Breaux’s Bay Craft and C. Fly Marine Services, the new Spindletop has two boarding platforms on the bow, port and starboard, and two overhead on the pilothouse, port and starboard. Rescue assist equipment includes a SeaLift custom-built rescue platform on the transom with a 24V hydraulic unit and a transom jib pole with a 120V electric winch. The rubber bumper system is a combination of D Bumpers and aircraft tires around the perimeter.

“We went to Breaux for a custom-built pilot boat that would maximize safety and comfort for our 17 mile stretch in the Gulf of Mexico and could not be happier with our choice,” said Kenneth Leslee Hurd, boat superintendent, Sabine Pilot, Unit 31. “The Spindletop with its 4 Hamilton jets coupled to the 4 800 hp Scania engines, Humphree active ride trim tabs, and Breaux’s new hull design she cuts thru our constant 3-4 ft chop that we run on a daily basis with ease. Another great feature from Hamilton is their new AVX(boat mouse) system that allows the operator to maneuver the vessel with ease in restricted areas.” Accommodations include two double bunk staterooms, a settee seating area, full head and shower, and one head treatment unit with fresh-water flush.

Login or register to write comments and join the discussion!
KS
Konstantinos Selinidis Sabine Pilots, USA
As a former Sabine Pilot of thirty years (07/01/1973 to 06/30/2004, who also served the Sabine Pilots as President for nine years, reading today about this magnificent vessel named “SPINDLETOP” and watching the video; it only makes me admire more, and want to congratulate Captain Tweedel, Captain Hurd, and the entire group of the Sabine Pilots for taking the SABINE PILOTS to the highest level of professionalism in their pilotage history. The level of your achievements bring back my memories of christening, not one, but three of the “Breaux Bay Craft” built pilot boats during my tenure: The Sabine Pilot II, The Sabine Bank Pilot, and the Sabine Pilot. How proud we were then! And I know, how proud you All must be today!!! CONGRATULATIONS!!! I am so lucky and so proud that I have been one of you.
May God Bless you All with fair winds and calm seas.
K. I. Selinidis,
Retired Sabine Pilot
Class of 2004.
[show more]
0
Read more...

The Sabine Pilots who help ships navigate their way up and down our waterways officially have a new place to call home.

The "Brazos Pilot" makes its debut
Brazos Pilot Association President Captain Billy Burns said a good pilot boat is essential to saving lives.
That is the expectation of their newest boat, the "Brazos Pilot": a vessel tailored to fit the job and provide their pilot association with performance dependability and the safety systems integration to fulfill their maritime mission.
Read more here,... http://markets.chroniclejournal.com/chroniclejournal/news/read/37679691

Today a look at a special vessel that is commonly seen on the Astoria waterfront: the pilot boat that takes pilots to and from passing ships.