Livorno: Man steals pilots boat and then sets fire to it 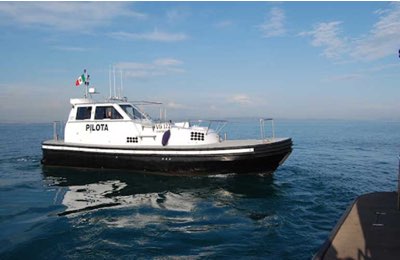 Chaos at the port of Livorno where a man of Dutch nationality, in the night between 19 and 20 October, was the protagonist of a chase at sea.

It seemed to be a night like any other at the Piloti del Mare headquarters, when at a certain point the team on duty realized that one of the service pilots was missing. The boat was already heading for the harbor exit, stolen by a man who would later be discovered to be of Dutch nationality.

The boat was stolen by a man who was later discovered to be a Dutchman. Before leaving the port, another pilot boat came across the boat and, becoming suspicious, started chasing the boat and, realizing that it was an intruder, raised the alarm.

A chase began between the two pilot boats, with the fleeing Dutchman crashing into a ship entering the port. In spite of the collision, the man continued his crazy escape towards the open sea, tailed by his pursuers and then by the Coast Guard and the Fire Brigade. The Dutchman's boat continued its mad race but, due to the damages, after having gone at least 6 miles away from the coast, it stopped.

Stopped and in the middle of the sea, the fugitive with no way out, started a fire inside the cockpit. The intervention of a Fire Department extinguisher allowed the arrest of the man, who had sustained some injuries in the incident.

The Dutchman seems to have continued to escalate during the journey to the ground and then to the quay, where he was transported by ambulance to hospital. More details are awaited to understand if there is also a motive behind the crazy gesture.

Piloti del Porto di Livorno
What's your opinion on this?
Login or register to write comments and join the discussion!
Read more...

On board Pilot One during boarding maneuvers to one of the regular ferries that connects Tarifa with Tangier city.

Gabon, Baie du Prince, 2012.
Getting that nice fat lady alongside