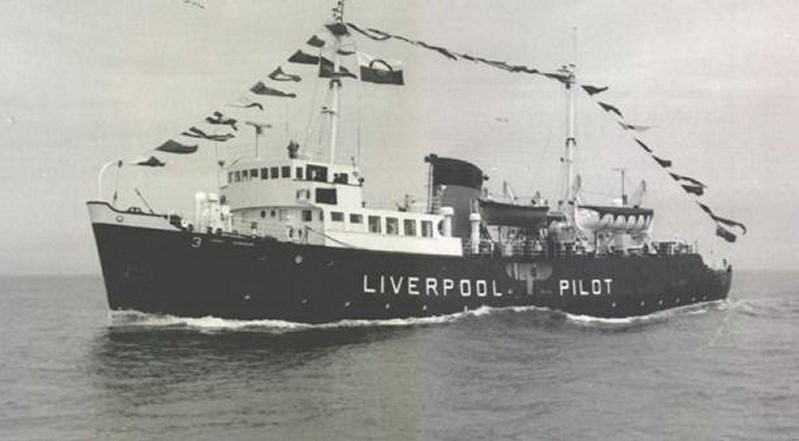 The first-known chart of the Mersey estuary was dated 1689 – to assist sailors approaching the port. The route for ships through to the port of Liverpool, through sand banks and the powerful tides of the Irish Sea and Mersey Estuary, was a challenging business.

However, charts didn’t eliminate the risk, and often local sailors were called on to assist incoming vessels. So in 1766 the first official Liverpool Pilot Service was established by the ‘Liverpool Pilotage Act’. This made it compulsory for a pilot to be aboard all vessels in the Mersey. So the pilot vessels would greet ships entering the estuary, a trained pilot would board and navigate them into dock. Likewise, on the return voyage, they would meet the ship and remove the pilot once he had navigated into a safe area of the estuary. The only exceptions to this were for Irish passenger ships and Isle of Man steamers (for example) as the Masters on these ships themselves held the Mersey Pilotage certificate.

As Liverpool grew in size and importance, during the 19th century, the career of Pilot was held in high regard. In 1858 the Mersey Docks and Harbour Board’s (MDHB) own Pilotage Committee took over responsibility for the service, and in 1883 the pilot boats moved from private ownership to the Board’s ownership (although the Pilots themselves remained self-employed until as late as 1988).

A new pilotage office was opened by Canning Half Tide Dock in 1883, and the first steam pilot boat, the Francis Henderson, was launched in 1896.

My grandad had health issues towards the end of the 1950s, which meant that he could no longer sail ‘deep sea’, he needed to be closer to home. His documents show that on the 19th June 1956 he was effectively signed off as a merchant seaman – his CRS56 was issued (which meant the transfer to national registration and civil rationing).

On 17th March 1958 (St Patrick’s Day) it appears he was in Dartmouth, to sail back with the brand new Pilot vessel, the Arnet Robinson. One of three Pilot boats that would be working the Mersey at that time:

“Together with her consorts Sir Thomas Brocklebank and Edmund Gardner, the Arnet Robinson works a three weekly cycle of operations.

Last week the Arnet Robinson undocked on Thursday and proceeded to the Mersey Bar Station for a week of duty. She was due to return to Princes Stage yesterday to take stores and then start a week as Point Lynas boat. The Point Lynas boat which she was replacing yesterday, the Edmund Gardner, will then dock for a week before taking her next turn on the Bar station.”

So the Pilot boats would each spend a week by Point Lynas – with its lighthouse – on the north-eastern tip on Anglesey; and a week at the Mersey Bar station, where the mouth of the River meets the Irish Sea. At this time the Mersey Bar was marked by the Bar Lightship:

Reaching Liverpool you pick up the pilot, cross the bar and enter the river Mersey.

Reaching Liverpool you pick up the pilot, cross the bar and enter the river Mersey.
Then following 2 weeks on the water, the crew would have 6 days leave.

...
Read the whole original article here
What's your opinion on this?
Login or register to write comments and join the discussion!
Read more...

The transfer from traditional to remote pilotage requires particular consideration of safety issues, and Pilotage Act obligates the pilotage company to ensure that the remote pilotage under development is at least as safe as traditional pilotage, affirms Sanna Sonninen, Pilotage Director.

Bulk Carrier Ship "ERIETTA" / Pilot Boat "SEA MASTER" / Embarking Maneuvering of Rio de la Plata Pilots #pilotonboard #Prácticos.-  #BoardingPoint #JP #Recalada #RioDeLaPlata #Argentina 23.09.2020 This video was filmed on board Pilot Vessel "SEA MASTER" and shows the moments when the Pilot Boat was proceeding to the #BoardingStation #JP #Recalada #RioDeLaPlata to the vessel "ERIETTA", to start with the Embarking Maneuvering of the #RioDeLaPlataPilots Special appreciation to the Master of...

Video Webcam San Diego (all cameras on a switched feed)

Members: All live feeds are in this playlist commercial-free: https://www.youtube.com/playlist?list=PLc24J6roqn3EyT_XFScGvXe3s9NIgKYEV Please click JOIN and become a San Diego Web Cam Supporter. Enjoy all San Diego Web Cam live feeds commercial-free as a thank you. 99/cents/month. JOIN: https://www.youtube.com/channel/UC88QpAaX8sdqm1fWYSjzbSQ/join This switched feed presents all of our live cameras with views of Downtown San Diego, San Diego Bay and the Pacific Ocean from cameras...

Video Pilot of cargo ship Ever Forward, which ran aground in Chesapeake Bay last year, gives up license

Pilot of cargo ship Ever Forward, which ran aground in Chesapeake Bay last year, gives up license