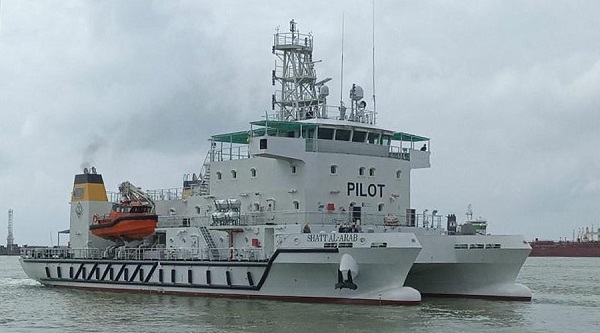 Shatt Al-Arab (“River of the Arabs”) is one of two newbuild vessels supplied by CDPLC to the same customer in fulfilment of a contract that also includes Toyota Tsusho Corporation (TTC) of Japan with loan funding provided by the Japan International Cooperation Agency (JICA). The delivery of Shatt Al-Arab and Al Faw, a buoy tender also built by CDPLC, is part of a multi-phase initiative of port and harbour rehabilitation and reconstruction projects being carried out in Iraq with the assistance of the Japanese government.

Under phase two of the rehabilitation, which involve renovations and maintenance of Iraq’s import-export base at the Persian Gulf port of Khor Al-Zubair, the buoy tender will deploy buoys necessary for the safe navigation of ships while the pilot station vessel will transport workers to offshore oil export facilities in the Gulf of Basra.

Shatt Al-Arab was designed by Singapore-based naval architects MTX Marine Design and Consultants in compliance to ClassNK rules. The vessel has a length of 52.4 metres, a beam of 18 metres, a depth of 6.1 metres, and fully air-conditioned accommodations for up to 47 people. CDPLC said that, as the vessel was built to be used in Middle East waters, special consideration has been made to select machinery and equipment capable of withstanding the harsh conditions encountered in its area of operations.

Two diesel engines propel the catamaran to a speed of 14 knots. The engines are fitted with an array of 19 copper nickel box coolers supplied by Weka Marine.

Shatt Al-Arab has already begun operating in Iraq. In addition to serving its main role as a pilot transfer vessel, it is also slated to provide accommodation services and logistical support for the pilot boats and crews that operate out of Khor Al-Zubair and the country’s other major Persian Gulf port at Umm Qasr.
What's your opinion on this?
Login or register to write comments and join the discussion!
Read more...

The Port of Townsville has welcomed the newest addition to its fleet of pilot boats with the arrival of the newly built MANTARAY. The $3.3 million, custom-built vessel utilises high-tech equipment and design to maximise safety and efficiency for pilot transfers.

The desire to improve efficiency and crew comfort has resulted in a new approach to hull design. Built from the ground up this new Pilot Boat design utilises an Extra Long Waterline (XLW) to maximise the waterline length.

The Port of Waterford is to invest almost €1m in a new pilot boat to be named Port Láirge, which as Irish for Waterford is a name long associated with a steam-powered dredger that served Waterford for more than 70 years until the 1980s.

Harbour Services Australia was the client for this ultra-efficient pilot vessel, Dongara Marine's second Berkeley Class pilot boat to operate from the port of Fremantle. Delivered in June 2019 it joined Fremantle Pilots’ Berkeley, which had already been operating with great success in the Western Australian port since 2015. Purpose-designed to maximise overall operability and the safety and comfort of pilots and crew even in demanding sea conditions, the Berkeley Class provides: • High open...

Great insights into the work of pilots on Puget Sound

by www.maritimeinjuryguide.org - published on 16 December 2021

Article Latest Edition of "The Pilot" by UKMPA released
222