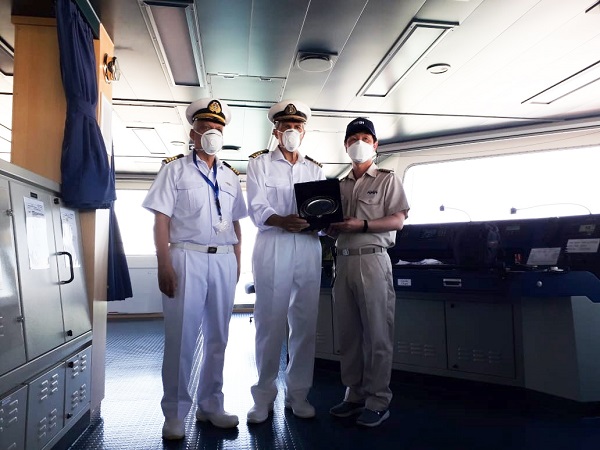 Admiral Osama Rabie, Chairman of the Suez Canal Authority (SCA) witnessed the transit of HMM ALGECIRAS, the world's largest container vessel, on its maiden voyage since its launching last April. It transited among the south convoy, via the New Suez Canal, heading from Yantian to Rotterdam.

That was during the Chairman's inspection of traffic in the Canal. His Excellency followed-up the vessel's transit from the New Marina, giving directives that all necessary measure be taken to ensure its safe transit, like: assigning a number of highly experienced SCA pilots, providing the required navigation aids, like: escort tug boats, and real-time monitoring of the transit from the Main Traffic Control Office, and various traffic control stations.

And as per protocol in the Suez Canal Authority on receiving mega vessels transiting for the first time, Admiral Rabie delegated SCA Distinguished Senior Pilot, Capt. Hisham Fawzy, and First Senior Pilot, Capt. Medhat El-Naggar, to board the vessel and welcome its crew as well as present the Shipmaster, Capt. Jon Kiun, with a commemorative gift.

Admiral Rabie emphasized that the New Suez Canal has further cemented the Suez Canal's existing place as the lifeblood of world trade. It also increased its efficiency so it remains the best option by far to current and future generations of mega vessels, especially container vessels that gained great significance in the past years, in light of the competition between shipping lines to build the world's largest vessels to benefit from economies of scale and minimize operation costs.

His Excellency elaborated further that the SCA keeps a keen eye on the rapidly developing maritime transport industry, and is even a few steps ahead by means of non-stop developmental projects in the waterway. Those projects don't include the New Suez Canal alone, but extend to establishing new waiting areas to increase navigational safety in the waterway and best prepared in the face of emergencies, as well as enhance the quality of provided navigational services through developing traffic monitoring stations along the waterway, and upgrading the fleet of escort tugs and other auxiliary units that partake in the pilotage process in the Canal.

Adm. Rabie also stressed that the SCA is well aware of the challenges maritime transport is witnessing at the meantime as a result of the COVID-19 pandemic. It is also taking all the necessary measures and preventative precautions to best handle the situation at hand, as well as actively communicating with clients and consulting on how to achieve mutual interest. The Authority is also adopting a number of pro-active measures in the form of a bundle of incentives and rebates for various types of transiting vessels.

The record-breaking vessel has a capacity of 23,964 TEUs and is among the fleet of HMM, the South Korean shipping line, and is the first of twelve vessels of the same class, design and size contracted to be built by DSME (Daewoo Shipbuilding & Marine Engineering) and SHI (Samsung Heavy Industries).

For his part, Capt. Kiun, shipmaster of the HMM ALGECIRAS, praised the navigational safety measures adopted by the SCA were an important factor in the safe and smooth transit of the vessel despite its rather large, unprecedented dimensions, and greatly valued the role of the SCA pilots, their professionalism, expertise, cooperation and friendly spirit.

She is equipped with operating systems that comply with IMO regulations. The upgraded design of the structure is meant to be more power-efficient, and thus, minimize the carbon emissions, to which the expected result is cutting 15% off operation costs.

New Ships Orderbook
c/o TRENZ GmbH
What's your opinion on this?
Login or register to write comments and join the discussion!
Read more...

Article "The 20,000 TEU Club" - The fleet of the largest container vessels.

by Baird Maritime - published on 13 September 2022

Trelleborg Marine and Infrastructure has supplied its advanced navigation and piloting solutions for pilotage applications to facilitate the safe and efficient berthing of vessels and to increase safety of larger vessels at Peel Ports Group.

International Maritime Pilots' Association (IMPA) received the 2022 SAFETY4SEA Initiative Award for conducting annually its ‘Pilot Ladder Safety Campaign’ with the objective of reporting pilots’ experiences of ladders and boarding equipment to the IMO and the wider shipping community. Other distinguished short-listed nominees of this category were: Inmarsat, International Marine Contractors Association (IMCA), Safetytech Accelerator and Seafarers Hospital Society. We are honored to be...

Image video: The Australasian Marine Pilots Institute (“AMPI”) is the professional body representing marine pilots throughout Australasia. It assists in the setting of standards, safety management and provides support and guidance with ongoing professional development.