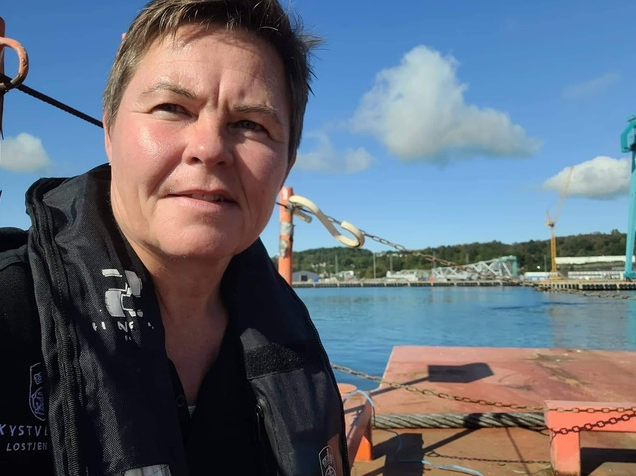 She just finished school in Norway, and “a 19 year old rebel,” admits Captain Breivik about her younger self. She didn’t know what to do next, but Solgunn Hamme Breivik certainly never expected to make history.

The unemployment office woman took note of this restless young woman and recommended an apprenticeship on a tall sailing ship. For the next 10 years she moved up the deck ladder and became a mate on the Coastal Express. One day, a pilot who was on the bridge with her said, “You should become a pilot.”

So the tougher journey began. It is a journey that men, of course, have taken for centuries, learning to maneuver ships though the tricky waterways of the world, linking port to port, nation to nation, and fueling the engine for commerce and tourism worldwide. Few women have ever tried it and only in the last two decades have women succeeded, as cultural norms and built-in prejudices against women have fallen off and changed the seascape.

“If I had known how hard it was going to be, I wouldn’t have had the courage,” Captain Breivik says with a sigh, recalling the almost two years of study, then a grueling oral exam and then the practical exam at sea.

At the time of our interview, she was in the middle of a long pilotage for a cruise ship through the fjords, carrying two hundred passengers and a large crew. She has also piloted mammoth oil rigs, supply ships, cargo vessels, even submarines. Basically, anything large that can float through Norway’s complicated coastline needs a pilot.

This veteran pilot is soft-spoken and self-effacing, giving credit to all those who encouraged and trained her. “We have to learn all of the details of the waterways and keep it all in our heads, like a book. The oral exam is hours of telling the examiners how you would steer a ship through a certain situation. But I was able to learn a lot by watching pilots work and listening to them talk about routes and ship handling.”

In Norway, all pilots work for the federal government and have to stay on the job 30 years to qualify for the full pension. They maintain a rigorous continuing education program on ship handling, new technologies, maneuvering systems and bridge management. Bridge management means getting the staff on the “bridge” - the ship’s cockpit or control room - to work together for a safe voyage. To that end, Pilot Breivik says personality is key.

“We have a psychological test in Norway to find out if pilots are suited for working with all types of people, especially ship captains,” including personnel from all over the world. The screeners call people who know the candidates well to ask about their abilities to work with others, to be amiable and strong at the same time. It’s a good time to check your ego at the dock because the captain of the ship is always the boss. “We have to be humble because over-confidence can slap you in the face.”

They also do not become the ship’s captain, “We don’t take over the captain’s command. We provide guidance and local knowledge.”

This personality profile might suit women well; so, why aren’t there more women in the business?

There are exceptions, as women become professional mariners. For example, Captain Lynn Korwatch of San Francisco was a mate on Matson ships, running cargo to Hawaii. She was 8 months pregnant when they offered her a chance to sail as captain. With no doctor on board, she took command and sailed away, refusing to give up her chance to be captain. She later delivered a baby boy and, while not a pilot, she became the first woman to captain an American commercial ship.

In Norway, if a mariner makes it to the rank of pilot, staying home is no longer a conflict, as the work schedule is two weeks ON duty, four weeks OFF duty, allowing time at home with family and rest.

Resting is vital for pilots and is regulated around the world in order to keep pilots well-rested and alert for what can be dangerous and catastrophic work. One mistake and a ship or dock can be damaged or sunk, lives can be lost, including the pilot’s, oil and toxic material can be spilled.

Climbing aboard a huge moving ship from a small pilot boat on a tiny rope ladder is not easy and if the seas are bad or the wind is up or one mistake is made, the pilot can fall, can be crushed between the two boats, drown, have a heart attack… it has all happened and Captain Breivik says her personnel safety becomes her main concern at those times, “Sometimes I think, ‘this is not going to work,’ and we try to work out the maneuver. But timing is everything.”

They train in the event of a helicopter transport crash and they are recognized as the first line of defense against any possible terrorism attack on a ship.

“There have been times I’ve thought, ‘This is not fun,’” she admits, but still loves her job, whether the physically dangerous parts or human interactions on the bridge.

Being a woman is neither a liability or an advantage in ship piloting, she says, because the atmosphere on ships has become more accepting.

“Sometimes only the tone of voice changes when they notice I am female. They might start out with a low-voiced hello, then switch to a softer, friendlier tone when they see I am a woman.”

Pilots around the world speak their local language, of course, and English, the internationally recognized shipping language, and are able to communicate with both the ship’s captain and the shoreside personnel and tugboats.

“You have to be very patient in this job, with everybody. But it can get pretty lonely in a 9-hour night going only 9 knots with just you and a Russian-speaking sailor on the bridge,” she laughs.

While there are still very few women working at sea, gender equality is making headway. Pilot organizations are actively recruiting and “Women Offshore” is an outreach organization partially funded by corporations.

While the job is challenging and risky, Captain Breivik says she never doubted her career choice and encourages young women around the world to get prepared for the job, if they can.

She is quick to give credit to the men she has worked with, “There have been men who have had more faith in me than I had in myself.” To other women mariners, she says, “Your efforts are appreciated and I’m most proud that I can be involved in a lot of complex marine operations in my country.”

Mauri Moore Shuler is a freelance writer based in Seattle and Mexico with generations of history in the maritime industry.

#Portheroes #Opencall The port of Rotterdam is and will remain operational. Thanks to you. Thanks to our #Portheroes. We’re proud to show how, thanks to the boundless commitment of local company staff, our port can remain up and running. In this first instalment of the #Portheroes series, we show how Rotterdam’s pilots are working hard to keep everything ‘business as usual’ in the port. An open call: interested in contributing to one of our videos? Please contact us via...

Opinion If you facilitate 90% of the world's trade, would you influence change?

by Melvin Mathews - published on 1 December 2020

Without a shadow of doubt, shipping is a key enabler of our current way of life and the globalized world we live in today. The irony is that the average person is unaware of the significance or contribution of the shipping industry and how much we rely on ships working without disruption

Opinion What is a Tug's Bollard Pull and How İt is Calculated?
461

Opinion Pilots are not Advisors to Masters
116