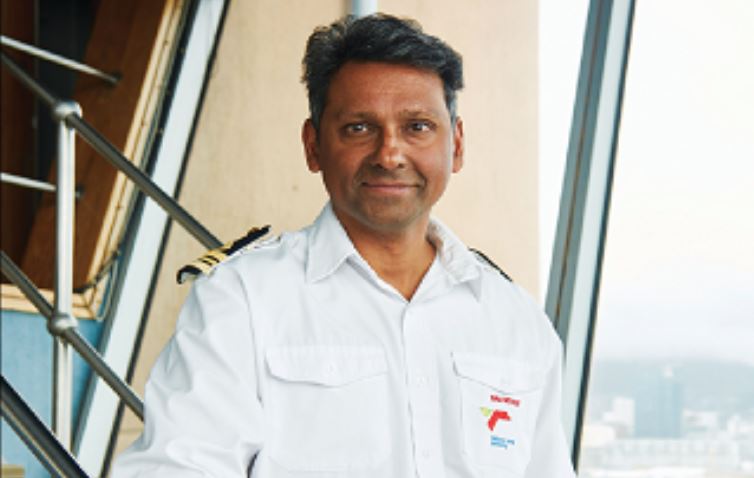 As for gender equity, Devan believes that there is no room to hide in this industry.

He qualified as a marine pilot and in 2003, was deployed to the Port of Durban- where he learned all about controlling fear, regaining calm, and managing incredible pressure.

“There were only about 14 of us when 22 were needed. I have never worked so hard in my life. It was also the first time that I was being transferred onto vessels by helicopter. My heart would be pounding as I was lowered onto the vessel, which would often be rolling beneath me. It was before the entrance channel was widened and you had to go at an angle at full speed to get the vessel through the current. Some days, you barely got back on dry land before you were back in the helicopter going out to sea to bring another vessel in,” he recalled.

Those early years were difficult, and mentors such as Tsietsi Mokhele, Gerry Staverees and Don McGhee helped protect the young pilots as they gained experience in the South African port system.

As for gender equity, Devan believes that there is no room to hide in this industry.

“Over the years, I have seen and trained the ladies on the water, and they are as good if not better than the men. You can’t fake it in this job, and women have pushed the boundaries. In management roles they are more subtle, and intuitive, which is definitely a positive," he added.

As a senior pilot, Devan continues to play a vital role in supporting the South African Maritime Economy- as a relief pilot to the Ports of Port Elizabeth, Ngqura and Mossel Bay and is also understudying to relieve at Saldanha, in addition to his responsibilities in the Port of Cape Town.

There are not many like him in the port system, as you have to understand the port and the different weather conditions in order to bring a vessel safely into port. Devan’s thirst for excitement means he is always up for the challenge.

More recently, TNPA has also developed its own insourced aviation service, manned by a new generation of helicopter pilots and avionics engineers from previously disadvantaged backgrounds, taking its transformation agenda to the skies.
Originla article from www.RisingSunOver.Port.co.za

Transnet National Ports Authority’s (TNPA) Port of Ngqura customers can count on experienced piloting services when their vessels are being moved in and out of the port. Ngqura boasts the services of Marine Pilot Ziggy (Siegfried) Duwe (62), who has achieved more than 4,000 ship movements in the last 12 years. He is the first pilot with this accomplishment in Algoa Bay, according to company records.

“Find your passion, set goals and commit to them.” Sound advice from Port of Cape Town’s Ellen Moletsane, who recently earned her Open Licence as a marine pilot.

Recently, Svitzer took an important step towards strengthening its presence in Africa by signing a five-year contract with Nacala Logistics in Mozambique for harbour towage, occasional pilot transfer and potential salvage work in the port of Nacala. At the same time, Svitzer also secured a five-year extension of its current contract with Egyptian LNG assisting the land-based Idku LNG plant with four tugs, two mooring boats and one pilot boat.

Article Study: increasing competition in ports and the underlying pressure

A study of increasing competition in ports and the underlying pressure to improve port performance. This thesis is the final deliverable for the completion of the degree of Master of Science in Transport, Infrastructure and Logistics (TIL) at the faculty of Civil Engineering and Geo-sciences at the Delft University of Technology.