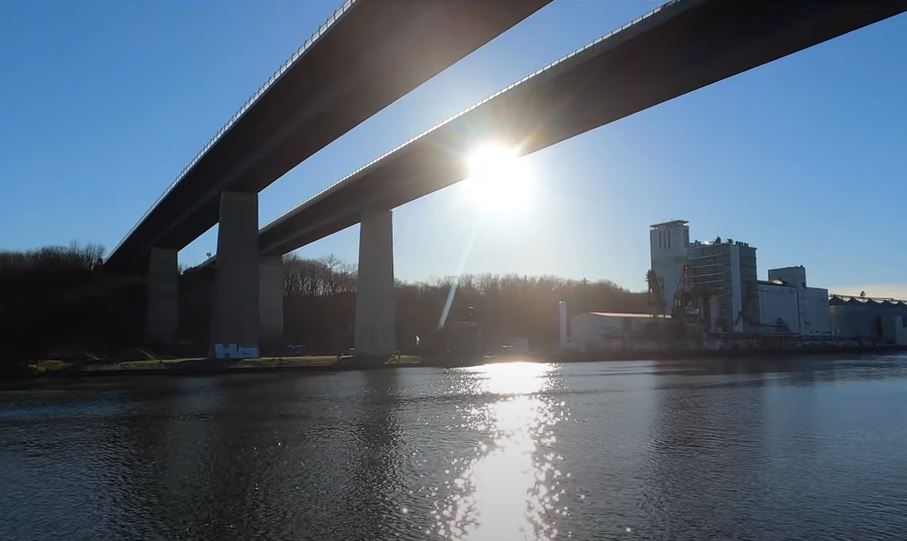 The collision on the Kiel Canal caused "visible damage" to the Holtenau High Bridge. The consequences could also be serious for the important connection in the longer term.

The Finnish special vessel "Meri" collided with both Holtenau high bridges over the Kiel Canal early on Wednesday morning at around 4.37 am. As it is still unclear how badly the collision damaged the bridges, the bridges and shipping traffic on the canal were initially closed in both directions for an indefinite period of time, the Kiel police said. The water police have taken up the investigation.

Crane transported on ship hits bridge
The heavy-lift and workboat was travelling on the canal in the direction of Brunsbüttel. The ship was carrying a crane, the boom of which collided with and damaged both Holtenau high bridges shortly after passing through the lock for reasons still unknown. Parts of the crane probably fell into the canal. According to the current state of the investigation, no one was injured in the accident.

Both the high bridges and the Kiel Canal have been closed to all traffic, including cyclists and pedestrians, since the accident. "This is a real bottleneck. It will still have a huge impact," said a police spokesman. Motorists would now have to divert to the Levensau high bridge, cyclists and pedestrians could also use ferries. It is not yet clear how long the closures will last. Experts will first have to assess the damage.

The cause of the accident is still unclear
The fire brigade is currently trying to clean up the hydraulic oil that spilled into the canal. No information can yet be given on the damage to the ship.

The statics of the bridge are to be examined in the course of the day. How the collision could have occurred and whether technical or human error was the cause of the accident is still being investigated.
German Source "Der Spiegel"
Video "Kiel Holtenauer Hochbrücke / Nord-Ostsee-Kanal"

KIEL CANAL Ship Collided Collision incident general cargo BBC PARANA vs Motor Tanker ORASUND
Tanker went out of control after engine failure and collided with general cargo ship in Kiel Canal near Kiel locks, at around 0120 Local Time Jul 27, The ships were transiting Canal in opposite directions, both reportedly, sustained damages and were detained. Tanker was berthed near collision site, general cargo ship according to track, exited Canal and was berthed in port outside locks, Ships...

The Dutch freighter "Eemslift Hendrika", which was in distress at sea, was secured on Thursday night. Salvage crews succeeded in boarding the ship and connecting it to two tugboats. This was announced by the Norwegian Coastal Administration. It will now be towed to the harbour of the Norwegian city of Ålesund.

#MaidenVoyage #HMMalgeciras
The maiden voyage of HMM Algeciras #9-Hamburg: The largest containership in the world, HMM Algeciras, navigates 110km up to the Elbe River to Hamburg's HHLA CTB Terminal on 7 June 2020 - Welcome to Germany!

P&O Maritime Logistics, the port and marine services subsidiary of UAE-based global port operator DP World, has taken delivery of a new all-FRP pilot boat for operation in the waters of Dubai.