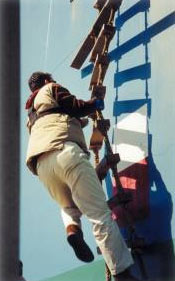 It is frequently a Maritime requirement for a ship to employ and have onboard, a Ships Pilot when entering port. His/ her presence will greatly enhance the safe docking of a vessel into port, harbor or to an anchorage.

As the ship approaches its destination a Ships Pilot will arrive alongside in a Pilot launch in order to board the moving vessel. Using well-rehearsed procedures the Pilot is provided with a flexible ladder with wood or plastic rungs, lowered from the ships deck. The launch approaches the ladder and when it is deemed safe to transfer, the pilot steps off the launch onto the ladder and climbs up to the deck of the ship. Accidents and fatalities have occurred during this method of transfer.

To greatly reduce such incidents a new transfer system has been developed. It consists principally of two simple components. A guide track and a platform. The components can be very easily assembled/ dis-assembled and stowed when not in use. The platform assembly rides in the guide track built onto the side of the ship.

When assembled, the system, part of which rides within the track, and the platform, is lowered by means of a winch. The Pilot simply steps onto the platform, will be surrounded by safety rails and is raised to the deck of the ship using the winch. The (Jacobs/ Pilot) ladder is eliminated. The reverse applies to allow the Pilot to dis-embark all within the safety confines of the platform and safety rails.

The system should be located around amidships. The system and winch will be located in a ‘house’ in way of the guide track. To assemble or dis-assemble the system, it has been designed to be light enough for each component to be ‘manhandled’ without tools and yet strong enough to safely support the Pilot.

Login or register to write comments and join the discussion!
DR
Dennis Robinson United Kingdom
Very much a backward view. Pilot hoists were banned after some dismal failures of equipment and crew. Please do not resurrect this flawed idea.
0

Frank Diegel Germany
Thank you very much for the discussion. It keeps people thinking.
The pilots' opinions about the Elevator System are very clear. This is shown by the feedback and comments here and on the various social media channels.
0

Arie Palmers Loodswezen - NEDERLANDSE LOODSENCORPORATIE, Netherlands
in my own tally 55% of the pilot boarding systems are non compliant... you suggest we should teust a sofisticated hoist system, operated by crews who are hardly capable of rigging a simple pilot ladder.. besides that, it has -thank God- been banned since 2012.. absolutely useless to start this discussion all over again. Wonder who wrote this and why... total foolishness
1
DC
Don Cockrill MBE United Kingdom
WE spent decades campaigning to have pilot hoists banned for good reason. Many fatalities and immersed pilots through the inability of ship's staff to properly rig, maintain and operate the equipment. Today we all know that the majority of ship's officers and crews seem unable to properly rig, maintain and supervise transfer operations using a simple pilot ladder. The concept of taking a backward step towards such a heath-robinson contraption for use in such a dangerous operation is horrifying.
2

Captain Wade Armstrong Hawaii Pilots' Association, USA
Mechanical pilot hoists have been prohibited by SOLAS since about 2012, and for very good reasons. If you have ever ridden a mechanical pilot hoist, it probably jumped and tilted as the hoisting wires spooled unevenly. For those hoists fitted with guide rails, they often tilted and jammed in the guide rails, trapping the pilot somewhere between the waterline and the deck edge. For those hoists without rails, they would swing away from the hull as the ship rolled, and then return with a vengeance.
No thank you, as much as I hate combination pilot ladders, I have a little more control of my destiny on them than on a hoist.
1

HARBOR pilot AMINE EL KEBIR Port Authority Algiers E.P.A.L D / D.T.D, Algeria
In my opinion, this is an excelent method for pilots transferts, but the success of it, is hardly depends on the crew training and qualifications for how to operate, manage, and adjust the platform, track, espetially during heavy weather conditions.
0
Read more...

The Nautical Institute (NI) and the International Maritime Pilots’ Association (IMPA) have been concerned for many years at the needlessly high rate of Pilot Ladder casualties. The NI is continuously reminded of the problem from its Members and through its Mariners’ Alerting and Reporting Scheme (MARS). The issue features frequently in our publications, and we recently dedicated an edition of our award winning magazine The Navigator to the topic, emphasising the importance of good...

This week, Kewatec handed over another popular boat, Kewatec Pilot 1630, to the pilot boat operator Gdańsk Pilot in Poland. The fast pilot boat is self-righting and designed with extraordinary safety performance for both the pilots and boat operators.

by Marine-Pilots.com - published on 9 December 2019

One of the most grandiose video about Marine Pilots' work. Must see!

Returning the Huron Belle to Port Huron for Winter Lay-up

posted on YouTube by "Marine Online"
Capsizing or keeling over occurs when a boat or ship is turned on its side or it is upside down in the water. The act of reversing a capsized vessel is called righting. If a capsized vessel has enough flotation to prevent sinking, it may recover on its own if it is not stable inverted. Vessels of this design are called self-righting.
#PilotBoat #Capsize #LifeBoat