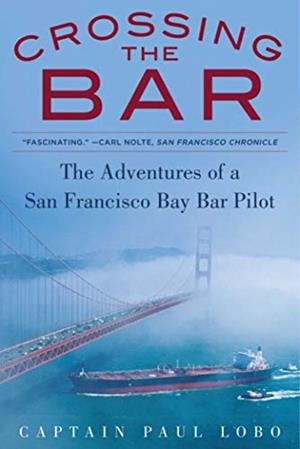 There is nothing placid about San Francisco Bay. Its raucous waters have hosted brutal storms, daring rescues, horrendous accidents, and countless hours of drama and tension. Captain Paul Lobo knows that better than most people. As a federally and state licensed ship pilot of unlimited tonnage for those treacherous waters, Captain Lobo piloted nearly 6,500 ships in a thirty-one year career--everything from mega-yachts, to the USS Enterprise, to TV's Love Boat. Each trip tells its own story, and the Cap'n shares many sea stories,all true. Readers will find gripping, tense adventure stories, all well told.

Reading Crossing the Bar is like being on the rolling bridge with Captain Lobo. Here are tragic deaths and lives saved, inspiring rescues, devastating storms, and the infamous and horrendous oil spill after the Cosco Busan rammed the Oakland Bay Bridge--resulting in the first known imprisonment of a maritime pilot for making an error.

Readers will also find a December sea rescue Captain Lobo was involved during a winter storm with hurricane strength winds and monstrous seas.Without Captain Lobo, two other pilots and the pilot boat crew and their supreme effort, the ship they saved would have foundered on California's Marin County rocky coast line with the loss of all hands. A must read for mariners and armchair mariners alike.
Buy this book via AMAZON
What's your opinion on this?
Login or register to write comments and join the discussion!
Read more...

Article What is a Maritime Pilot? From "Crossing the Bar, The Adventures of a San Francisco Bay Bar Pilot" by Captain Paul Lobo

Chapter 3 from the book "Crossing the Bar, The Adventures of a San Francisco Bay Bar Pilot" by Captain Paul Lobo, available on Amazon (link below)

Opinion The valet parker for ships

Review of Capt. Paul Lobo's book "Crossing the bar". The valet parker for ships: More than 30 years of being a Pilot. Book Review by Bianca Reineke, Germany

Some ship handlers today use electronic instruments from start to finish and these ships usually have powerful engines and thrusters and an almost unlimited number of personnel on the bridge.

The Sabine Pilots who help ships navigate their way up and down our waterways officially have a new place to call home.