Therotterdampilot.com is an independent blog and news site about maritime pilotage, innovation and news in te maritime cluster.

Created by Herman Broers (1968), Maritime Pilot in Port of Rotterdam: 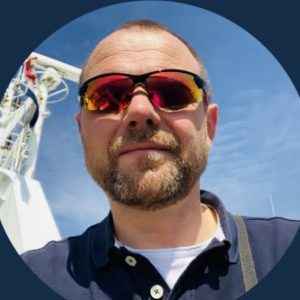 After attending the Willem Barentsz nautical college in Terschelling, I started my career with Stolt Tankers from 1989 until 1999 As deck officer in various positions. From 1999 – 2002 I worked with Stolt-Nielsen Netherlands as Sr. Port Superintendent in the ports of Rotterdam and Antwerp.

In 2002 I joined the Rotterdam Maritime Pilots Association as a Pilot-trainee. In 2003 I became a maritime pilot in the Association. At the moment I am licenced to handle 400 m long ships, as well as Eurochannel-bound ships, and ships passing through the Calandbridge. I hold a VTS licence in order to serve at Traffic Center Hoek van Holland during Shore based pilotage, as well as regular Pilot-Maas duties. I serve as Chief Pilot on a regular basis.

Apart from my duties as a Maritime Pilot, I have been involved with the Maritime Pilot’s Pension scheme since 2006, and hold the position of Vice-Chairman of the Rotterdam Pilots Welfare Society, where maritime pilots, both active as well as retired meet.