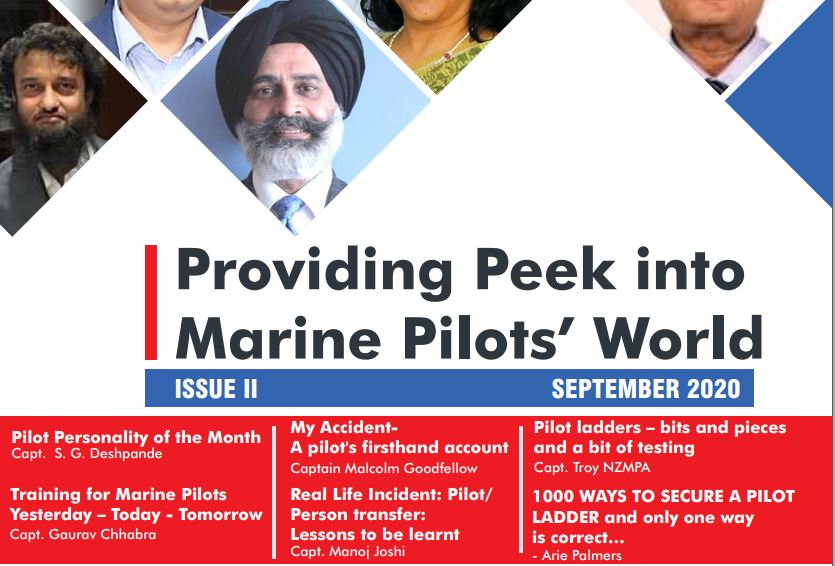 Editor speaks on this issue


Good day to all readers!
This has been a fantastic month for AIMPA. We were at the peak of Publicity which is actually not our aim. Our new inaugural issue came out well and was appreciated all over in the shipping fraternity in India as well as abroad. People called in, appreciated the move, hoped that it would sustain and suggested topics for future editions. Gives a full feeling of satisfaction on seeing peoples' expectations from this journal. People in Ministry called to congratulate, and Someone said proudly 'this is the first journal in Indian Shipping'. Very flattering remarks for the editorial team, we were overwhelmed. AIMPA loves to be noticed by people in shipping.

Who is a maritime pilot?
Normally one would say he is a mariner having local knowledge and is expert in maneuvering the ships and of course is licensed to do so by a recognised authority. This might be a typical definition of a maritime pilot one may find in a textbook, but in my opinion there is something more to it. When it comes on ground level, unless the most expert Pilot has self awareness and domain awareness with a pinch of common sense, he will always find his expertise in limitation. In our first edition there was a wonderful quote by Admiral E J King which says "A great ship handler is one who does not come to a situation that requires great ship handling".what does it really means? This situation can only be avoided by awareness. Often times the ship and its cargo may be worth few million dollars, and the liabilities practically unlimited. In such a situation who would like to handover an asset of this magnitude to an ignorant expert, no matter how expert swimmer one may be but if he jumps in a pool of acid in ignorance, he is never going to make it. Anyways the loss and liabilities does not reduce by having an expert on bridge once vessel meets an accident.During my tenure as a pilot I have witnessed a number of such cases where most expert pilots got in to a situation just because they missed some information either non availability of tugs or mooring crew despite bringing vessel safely close to berth and ultimately resulting in an accident. In our opinion to be a successful pilot AWARENESS is the key.

The month was also a bit tough. One of the pilot at the point of disembarking fell off the Pilot ladder into the boat and suffered injuries, bruises. We panicked and tried our best to help. Upon seeing no fractures, we were relieved and had tears in one eye and another with happiness. Such is life, on one count it is tough and on the other count it is rewarding. Life is to move on. Best part of the month as we received a lot of calls from pilots reporting about pilot ladder conditions. AIMPA aspires to digitise this reporting through an app. Every incident has a lot to learn. AIMPA has started a feature for lessons to learn from this month. Hope our maritime pilots report incidents and we can then learn a lot from them.

Wishing you all a Happy and safe piloting.
Marine Pilots Journal

AIMPA
- All India Marine Pilots' Association
Editor's note:
Opinion pieces reflect the personal opinion of individual authors. They do not allow any conclusions to be drawn about a prevailing opinion in the respective editorial department. Opinion pieces might be deliberately formulated in a pronounced or even explicit tone and may contain biased arguments. They might be intended to polarise and stimulate discussion. In this, they deliberately differ from the factual articles you typically find on this platform, written to present facts and opinions in as balanced a manner as possible.
What's your opinion on this?
Login or register to write comments and join the discussion!
Read more...

Boarding Accident Claims Marine Pilot's Life off Yalova, Turkey. Maritime-Executive.com as well as Seanews.com.tr report unanimously on the death of a Turkish pilot

An investigation is underway following a collision between "Florence Spirit" and "Alanis" in the Welland Canal. The incident occurred around 4 p.m. Saturday near Port Robinson when the dry bulk cargo ship "Alanis", which was carrying windmill parts to Duluth, Minnesota, collided during a passing maneuver with the "Florence Spirit", which was carrying coal on its way to Quebec. Editors Note: According to the "Welland Tribune", the Florence Spirit was heading down the canal while the MV...