Historical pilot schooner "Elbe No. 5"​ collied with containership and sank. 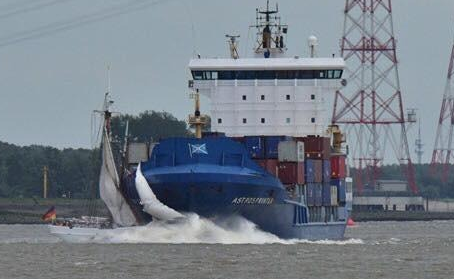 43 people were on board the ship when it collided with the 141-metre-long container ship "Astrosprinter", which sails under the Cypriot flag and was on its way to the North Sea, at about 2 p.m. near Stadersand. Further details on the course of the accident are not yet available.

One thing is certain so far: five people have been injured, including one woman, according to the Situation Service. After the collision, the "No. 5 Elbe" was very quickly filled with water, so that the 43 passengers had to be rescued quickly from board. The Stad fire brigade and other helpers were quickly on the spot. The ship was secured with steel ropes to prevent it from slipping deeper into the Elbe. How the two-master is to be recovered is unclear.

The 37 metre long gaff schooner is Hamburg's last remaining seagoing ship from the wooden ship era. In 1883 the "No. 5 Elbe" was built at the Stülcken shipyard as a pilot schooner: The task of the ship was to bring pilots aboard such ships in one of the roughest sea areas of the world, the North Sea, which were on their way in the direction of Hamburg. In the 1920s, the adventurer Warwick Tompkins acquired the sailor and even circumnavigated Cape Horn with him in 1937.

Since 2002, the "No. 5 Elbe" has been back home again: The Hamburg Maritim Foundation discovered the pilot schooner at an antiques dealer in Seattle and acquired it for 800,000 euros. Most recently, it lay for eight months in a Danish shipyard and was overhauled for 1.5 million euros. Among other things, it received new outer planking and a new stern. It had only returned to Hamburg a week ago.

Photos: Social Media, www.Lotsenschoner.de
What's your opinion on this?
Login or register to write comments and join the discussion!
Read more...

returning to her St.Helier base

Article Can you trust your GNSS data?

This important topic is still underestimated in shipping! Can you trust your GPS? Your Galileo? Knowing where the ship is and where to sail next is the main task of navigating a ship and is commonly supported by using Global Navigation Satellite Systems (GNSS). But what happens if the GNSS gets intentionally disturbed?

An investigation is underway following a collision between "Florence Spirit" and "Alanis" in the Welland Canal. The incident occurred around 4 p.m. Saturday near Port Robinson when the dry bulk cargo ship "Alanis", which was carrying windmill parts to Duluth, Minnesota, collided during a passing maneuver with the "Florence Spirit", which was carrying coal on its way to Quebec. Editors Note: According to the "Welland Tribune", the Florence Spirit was heading down the canal while the MV...