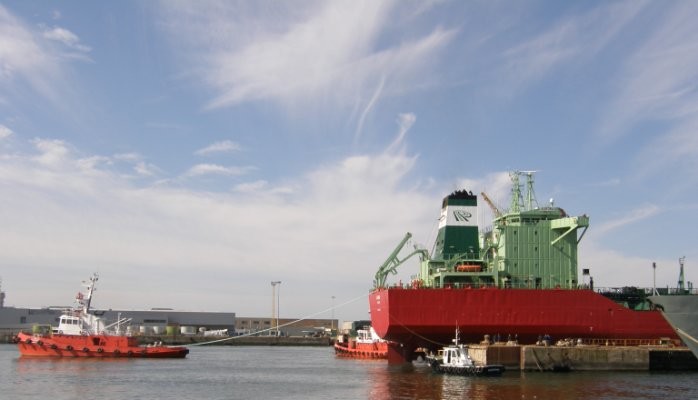 I got to the ship at the shipyard on the previously agreed time, taking into account the height of the tide in order to have a good under keel clearance, just to be informed that a sea chest valve is leaking and it will take about 45 minutes to fix... No problem, we are still within the tidal window, why not go for a walk around the shipyard and take some pictures with the sophisticated photographic equipment I keep in my pocket (Nokia N70 phone…).

After completion of the repair in the engine room and a few more pictures on my phone, I am finally called by the dockmaster and get to the bridge where I am received by the relieving captain, who happens to be happily drilling holes on one of the bulkheads in order to place an electronic display, together with the person that should be doing that, the shipyard electronics technician… he tells me the other captain will be coming soon.

When the “other” captain arrives on the bridge I give him the written plan and explain the intended manoeuvre. Taking into account that the main engine is still not working, two tugs will be used. By this time I have to ask the relieving captain to stop the drilling on the bridge as I can't communicate with the tugs and the shipyard dockmaster ashore with all that noise…

The dock gate is now opened and the aft tug is made fast. I ask the captain to test the bowthruster only to be informed that it will not work unless we wait for another 45 minutes. As the shipyard had given me the information that the thruster would be operative and it isn't, we now have to pass two more lines ahead in order to control the bow when coming astern.

Going to the bridge wing with the two captains I then realize they are both worried that the dock is quite narrow for the ship’s breadth. Yes it is, but it was already when the vessel came inside, unless the ship got bigger or the dock narrowed (this is what I wanted to say but kept to myself)… In fact the ship is about 16,5 meters wide and the dock about 18 meters, so no problem, we have already docked vessels with 17,8 m breadth (for those asking how is it possible for the shipyard to work on the side hull I must say that after passing the gate the dock widens about 1 meter).


I decide not to wait for the bowthruster because now nobody knows when or if it will be ready so I start to move the vessel with the aft tug pulling slowly, when we are joined on the bridge by the company superintendent. And this is when the two masters begin to be really worried about the new paint job (both captains, in the presence of their company superintendent tend to become uncomfortable, there is an obvious cultural difference problem that makes them fear that if something goes wrong their job will be at stake) …

When I then hear from one of the captains “it’s very close on this side, pilot” I have to answer “it’s very close on BOTH sides, Captain…”. The superintendent laughs and goes on his business, giving the chance for the masters to relax a little bit. Unlike the docking procedure, when we usually say to the more worried masters that if something goes wrong they are in the right place to repair their ship, on the undocking manoeuvres, with the vessel looking brand new and everybody proud of that new paint work, there is always extra anxiety on the bridge.

Drydocking or undocking is always a difficult task, particularly with a “dead” vessel (no power/propulsion) and the wind blowing on the ship's side. But everything goes fine, no scratches, no indentations, we pull the vessel out, make fast the other tug on the bow, swing the vessel and go starboardside alongside on another berth (easier said than done…).
Read on LinkedIn
What's your opinion on this?
Login or register to write comments and join the discussion!
Read more...

Article The use of helmets... or “Why Do Pilots Not Wear Helmets?”

The American Maritime Pilot has a special and important job bringing ships into port safely. In the history of pilots Robert Smalls stands out as one of the most heroic and able pilots in American History.
Watch the full video below:

Video Boarding with pilot ladder - Do you remember your first time?

by "Domonkos Baráth" on YouTube.
Boarding with pilot ladder to Soyo LNG tanker near Cadiz