The use of helmets... or “Why Do Pilots Not Wear Helmets?” 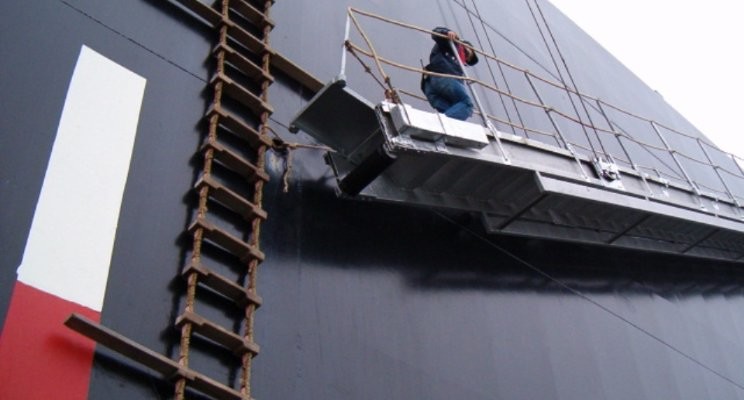 Pilot transfer by pilot ladder is always a big risk
The most dangerous part of a harbour/maritime pilot’s job (from the personal point of view) is the transfer from the pilot boat to the ship and from the ship to the pilot boat, as various incidents and accidents involving pilots falling from the pilot ladder into the pilot boat or to the water, due to weather, ship's motion or failure of the ladder clearly show. The pilot’s personal protective equipment is therefore of paramount importance on the prevention of serious injury should an accident occur. Even though we still see, here and there, pilots wearing what could be described as their Sunday's best (no PPE whatsoever), on most of the reputable pilot organizations it's now mandatory the use of at least an automatically inflatable lifejacket or a full weather jacket (different types and brands) which incorporates all the SOLAS requirements for lifejackets as well as harness, strobe light and even a personal locator beacon (depending on model). Safety shoes or boots and non-slippery gloves are usually also standard equipment used by the prudent pilot, even if not mandatory.

All this equipment is quite important for the personal safety of the pilot but lacks the ability of providing adequate protection should a pilot suffer a more than probable head injury on a fall accident.

The Safety Management System we implemented when I was in charge of a Pilotage Department requires for a constant formal safety assessment and an ongoing review of critical pilotage procedures. Due to previous incidents with pilots while transferring to or from the ship, the risk of head injury was identified and corrective / preventive action taken. Appropriate safety helmets (light, comfortable and with neutral buoyancy, which minimize the risk of neck and spine injury for water impact) were purchased, also taking into account previous experiences on this subject on some US and North European ports.

Since the beginning of that year, pilots at the port I was working on have been using those safety helmets on a regular basis as a complement to the other standard protective equipment.

“Why Do Pilots Not Wear Helmets?”
published by Capt. W. A. Worth on Professional Mariner, March 2008, shows that this issue is an ongoing concern, but not very often dealt with:

“The recent spate of accidents, have shown that often pilots are rendered unconscious when they fall from a pilot ladder and are unable to take action to save themselves. Working on a pilot boat puts both the pilot and the deckhand often 30 feet below the deck level of the ship that they are working, anything dropped from the deck from shackle pins to the pilot ladder itself can cause serious head injury.

Here on the Columbia River Bar, helmets have become standard safety gear. From the beginning of the helicopter transfer system, they were mandated by the helicopter companies. Simple kayak helmets offered the protection needed for being hoisted from the helicopter. They have become routine, and are now used in both helicopter and boat transfers. There have been several incidents in which a head injury has been prevented.

Why NOT?
The big question is Why Not? This is the easiest and cheapest way to reduce injury, and only vanity and tradition seem to be reasons to not wear some type of head protection. All of the float coats, epirb's, and waterproof radios, fail if the pilot is unable to help themselves due to a head injury…."

This is the type of eye opener text that effectively changes the question regarding the usage of this extra safety equipment from "Why?" to "Why Not?".

Since we implemented this simple but effective safety measure on that port, I got all sorts of feedback, mostly good but plenty of negative ones as well. Curiously, the negative feedback came mostly from actual pilots from other ports. That came as a surprise for me, since there is hardly any shipping, maritime or offshore industry nowadays that will not require some sort of head protection.

One of the worse arguments I heard was the notoriously dangerous phrase "we've always done it like that"… Well at some point something had to change, and we did it!

Obviously every port is different and there are usually very particular characteristics that make certain procedures fit for a certain area but totally inadequate for another. It is up to the pilotage organization to identify hazards based on local weather conditions and, through a thorough risk assessment, come up with mitigation measures.

Maritime pilots not only supply pilotage and shiphandling skills to ships but also provide a public service by contributing to the overall safety of maritime traffic and by ensuring the protection of the environment. In my opinion this should be complemented with high standards of personal safety, beginning with routine usage of full PPE, including suitable helmets.

I would like to know how pilots and other professional mariners feel about this (controversial?) subject.
The use of helmets
Luis Vale on LinkedIn

Login or register to write comments and join the discussion!
GR
Geoffrey Rowley Taiwan
Hi Michael,
The fall arrest device can be used to descend, so you would not be stranded in mid air. I used them when doing ship boardings from a RIB up a wire ladder and no problems, while underway. No problems but specific training necessary
1

Mr Michael Nicholson Shipmove Ltd., United Kingdom
I don't think a fall arrest lifeline is going to be practical Geoffrey. Its another snagging hazard, plus what happens when you leap to the boat, or even land on the boat then it drops away into the trough of a wave with the force (and acceleration) of gravity. The fall arrestor operates and it holds you off the deck dangling in fresh air?
1
GR
Geoffrey Rowley Taiwan
Helmets are basic personal protective equipment.
I also think a fall arrest lifeline from above should be standard
0
Read more...

Drydocking or undocking is always a difficult task, particularly with a “dead” vessel (no power/propulsion) and the wind blowing on the ship's side.

Correct method of rigging pilot ladder explained.
As explained, a large number of reports related to the use of pilot ladders which are too long relative to the vessel’s draughts. As a result, the excessively long ladders require shortening up before being deployed for boarding pilots. In these cases, ship crew shortens the pilot ladders, using D-shackles to choke the side ropes at the required height along the ladder’s length. In this method, the D-shackle is first secured to a hard point...

Load Testing of Accommodation Ladder Set. The Test was carried out under Class Surveyor's supervision at Roads.