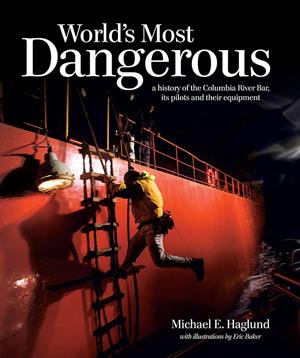 For two centuries, the Columbia River Bar has been called one of the world's most dangerous passages. The loss of nearly 2,000 ships has earned the Bar the moniker "Graveyard of the Pacific"

But a reputation based on explorers' accounts and wrecked hulls is open to argument. This book definitively establishes the Columbia River Bar as the world's "most dangerous" based on science: the unique geologic history of the Columbia River's relatively young mouth is what produces its unparalleled propensity to generate waves that can topple the world's largest ships. In all the world, there is no place where it is more critical to have a pilot.

And nowhere in America are the standards higher for a maritime pilot's license than for the Columbia River Bar. Applicants must have two years of sea time as a ship captain with an unlimited license- any ocean and any ship.

This book tells the story of the Columbia River Bar; its formation during the cataclysmic Missoula floods which blasted away an earlier mitigating delta, the building of the jetties to stabilize the shipping channel, the adventures and tragedies of the bar pilots and their operators, and finally the equipment used by the pilots to transfer to and from great ocean-going ships.

Opening the building to unveil the Pilotboat "Columbia". Preparing for launchday.

The L-type is the compact and fully-electric solution for transferring crews from small, non-DP vessels onto fixed or floating structures. With its continuous flow of personnel, it can transfer 50 people in five minutes. More from Ampelmann Operations: Subscribe on YouTube: https://www.youtube.com/user/Ampelman... Website: https://www.ampelmann.nl/ Facebook: https://www.facebook.com/AmpelmannOpe... LinkedIn: https://www.linkedin.com/company/ampe...

Blog: https://www.merrimacins.com/understanding-and-preventing-tug-barge-risks/ Understanding and Preventing Tug & Barge Risks The maritime industry relies on tugboats and barges for a wide range of applications. Tugs are used to pilot vessels into and out of ports, while barges are used to transport bulk materials. The relationship between tugs and barges is critical, as most barges are not self-propelled and must rely on the skilled operation of a tug or tugs for propulsion. At Merrimac...

As the COVID-19 pandemy restricts our daily lives more and more, Shipping Lines, Ports, Linesmen, Tugs an Pilots will never stop. We are all part in a big chain that keeps moving cargoes anytime, worldwide. Today we may wear face masks, we do not shake hands anymore, and we stay at a safe distance from each other onboard. But we keep them ships moving. This is a short video about the outgoing COSCO SHIPPING UNIVERSE, a 400 meter long ULCS, from Yangtzekanaal, Euromax Terminal to sea.
She...