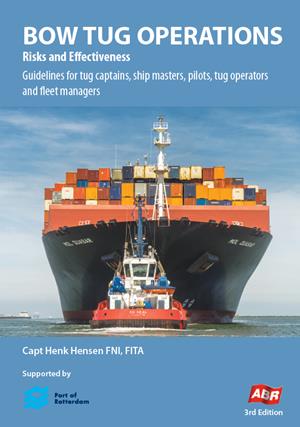 Bow tug operations at a ship having headway are very risky, particularly in the case of ships with a very high speed on dead slow ahead – a situation increasingly seen with large container vessels. The problem starts with the approach towards the bow and then with the procedure of passing the towline. Because of the risks involved, tug masters that have to carry out bow tug operations, and particularly tug masters of ASD-tugs that have to operate bow-to-bow, should be well trained and aware of all the possible risks.

These issues are all dealt with in this book in an easy understandable way, resulting in a set of guidelines for safe operations at the bow.

Suggestions for some test trials using your own tugs have been added in order to be able to learn about its specific suitability for bow-to-bow operations, with images explaining the trials discussed – all again focusing on the safety of tugs, tug crews and attended ships.

Finally, since speed, which means speed through the water, is so critical for safe bow tug operations, renewed attention has been paid to this important aspect.

buy online here
What's your opinion on this?
Login or register to write comments and join the discussion!
Read more...

A maritime pilot, marine pilot, harbor pilot, bar pilot, or simply pilot, is a sailor who maneuvers ships through dangerous or congested waters, such as harbors or river mouths. They are navigational experts possessing knowledge of the particular waterway such as its depth, currents, and hazards.

During high wind conditions it is sometimes required to transfer pilots from the Pilot Station Vessels to incoming ships. In this case the NHV Dauphin Helicopter came to collect a pilot an d luggage form the PROCYON at Maascenter pilot station.

Opinion Should the Captain go down with the ship?

On Monday, March 23, 2020, Admiral Osama Rabie announced the successful transit of the Italian passenger ship COSTA DIADEMA in the northbound convoy through the new Suez Canal, coming from the United Arab Emirates heading to Italy. Special measures were applied, as 65 Coronavirus cases were reported on board which required piloting the vessel remotely through pilotage team boarded on two escorting tugs in full coordination with the transit control offices and navigation monitoring stations in a first of its kind scenario in the history of the Suez Canal.

Article The Story of the #dangerousladders group on Facebook
188

Article A review of the ship’s pivot point: Science, Maths and Observation’ Where is the centre of a ship’s rotation?
55