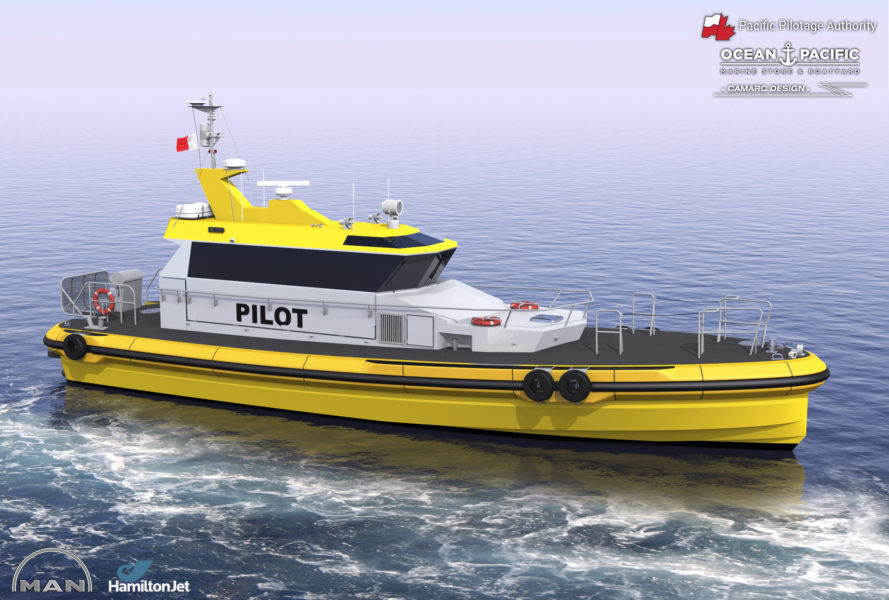 Ocean Pacific Marine of Vancouver Island BC have been awarded a contract to build and deliver a state of the art 19.9m Pilot Boat for the Pacific Pilotage Authority. The new craft will be all-aluminium construction and built to Lloyd’s Class in accordance with Transport Canada regulations. Designed by Camarc from their Scotland office, this vessel represents the latest in cutting edge pilot boat technology. The 19.9m pilot boat will feature the new Camarc refined double chine hull, providing enhanced efficiency and reduced accelerations & motions for the Operator. A resiliently mounted wheelhouse will also be installed to optimise noise and vibration for Crew comfort.

The heightened hull efficiency in conjunction with a new-to-market Tier III emissions system from MAN provides the latest in efficient clean operations for high-speed, long-range diesel pilot boats. The diesel engines and tankage offer the power demand to reach operational cruising speeds of 25+ Knots and sustain this over long range transits, as is required in the area of operation. The Tier III exhaust system then minimises diesel emissions in accordance with future IMO marine Tier III standards to come, requiring a 70% reduction in nitrogen oxides (NOx) over that of the current Tier II standards.

The new vessel will feature Hamilton waterjet propulsion providing a highly manoeuvrable platform for pilotage duties along with protection against damage from log debris, vital to operations in BC. Also installed is a large section Camarc Popsure fender system for protection against boarding impacts during pilotage. When delivered, the new vessel will join the PPA fleet including 4 other Camarc pilot vessels; two 22m boats built in 2000-2003 and subsequently two 19.9m boats built in 2008. Ocean Pacific have worked with the Pacific Pilotage Authority for a number of years on maintenance and refit work on their existing fleet and this order represents a significant step in delivering a new high-tech vessel incorporating the latest in design, build and technology.
Ocean Pacific Marine
What's your opinion on this?
Login or register to write comments and join the discussion!
Read more...

The Alusafe 1620 Pilot is a special designed Pilot Vessel. The vessel is designed for harsh weather in open seas as well as in sheltered waters with high marine traffic.

The boat is specially designed for transport of up to 12 passengers and 2 crewat high speeds. Sheltered steering position with full enclosed front, raises the comfort onboard. The boat is significantly lighter than the market average which benefits fuel consumption and adds to the already proven seaworthiness. 9m ProZero P-top crew boat is designed for quick and safe transfer mission of personel and cargo. The boat is built in light-weight materials to decrease weight and enhance mission...

Ocean Pacific was contracted to construct a state-of-the-art Pilot boat for the Pacific Pilotage Authority. The craft features a MAN tier III emissions system, offering reduced diesel emissions.
In September 2021, The Pacific Guardian was splashed for the last time after some final finishing touches, and left Campbell River for Victoria where it will join a fleet of four other vessels for the Pacific Pilotage Authority. This state of the art pilot boat will aid in carrying out safe,...

Welcome back to the Fluctus Channel for a feature on the important role of tugboats in navigating the bigger vessels in harbors and canal, as well as the open seas.