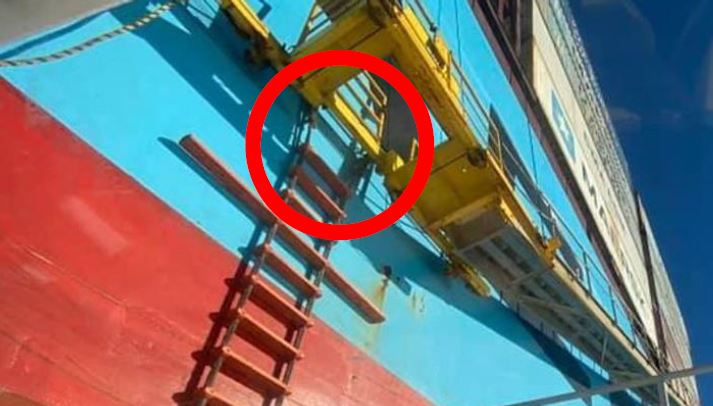 This Statement was found on Twitter.
The original paper can be downloaded at the end of this article.

Here is the statement by the Pacific Pilotage Authority - PPA, Canada:

The use of trapdoors on accommodation ladders is not new and is mentioned both in SOLAS and the IMO Circular. When a trapdoor is used there are clear requirements which include:


There is a common misunderstanding amongst vessel operators that vessels built prior to 2012 are exempt from some of the requirements for pilot transfer arrangements. This is incorrect; the rules for trapdoors have been in place since 1979 and the requirement for the pilot ladder to extend above the lower platform to the height of the handrail has not changed.

Action to be Taken
The combined arrangement of the pilot ladder and accommodation ladder were contributing factors in the recent death of the US pilot. The Pacific Pilotage Authority requires that pilot transfer arrangements be in full compliance with both SOLAS Chapter V, Regulation 23, and IMO Circular 1045(27). If trapdoors are used, the pilot ladder steps must extend above the platform up to the height of the handrail and securely fastened to a strongpoint on deck. Vessels with pilot transfer arrangements that do not meet these standards are at risk that the pilot may not board until the transfer arrangement has been corrected and complies with the above requirements.

All member agencies, ship owners, and masters should be advised accordingly.

Please contact PPA at marineops@ppa.gc.ca for queries or concerns.

Login or register to write comments and join the discussion!
GR
Geoffrey Rowley Taiwan
I work in Commercial Diving offshore, an industry that from its beginnings was dogged by such accidents, and finally is being forced to improve safety. I hope Marine Pilots can also get stricter enforcement of safety standards.
0

Mr Tiran Jasemzadeh Ranjbar Persian Gulf Pilot Maritime Services Co., Iran
With many thanks to Pacific Pilotage Authority for providing us the statement and the publisher , marine-pilot.com.
Actually I am fully agree with the action to be taken in accordance with Solas and IMO resolutions because in this case embarkation of marine pilots are very risky. As I am chief pilot of the port I have embarked many vessel fitted with such arrangements and I found this type of arrangement which you discussed in this article and have showed us in the photo on top is very risky and difficult to board the vessel specially for older pilots. Another issue is to board Vessels by such boarding arrangements in bad weather when vessel is rolling in heavy weather and during raining which is not safe at all to use this type of combinations.
Thanks and regards,
Tiran
[show more]
0
Read more...

Ship receiving pilot at the pilot station and proceeding to jetty.