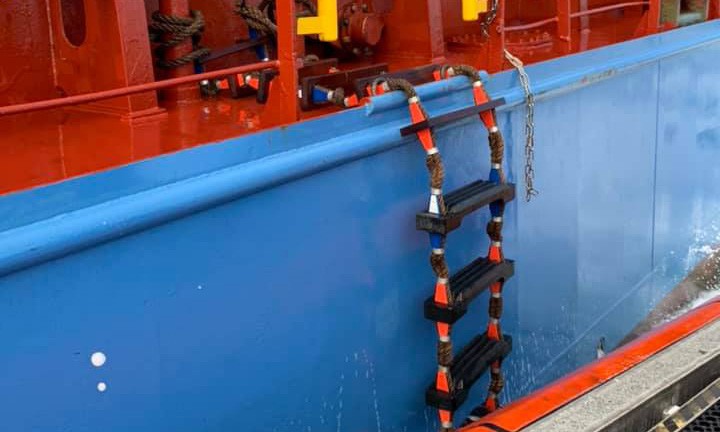 Previous campaigns by the association have consistently shown results of pilot ladder deficiencies around the 20% mark. Some pilots question the need for such campaigns, but it is only through collating such information that efforts can be made at the IMO and elsewhere to improve the situation.

Since August 2017 a dedicated #dangerousladders Facebook page has been available, with the goal of improving awareness of the poor attitude shown towards pilot transfer arrangements by sharing information. The group can be found here: https://www.facebook.com/groups/831768026997774

Earlier today a vessel the Wilson Leith arrived at the Steenbank pilot station to board her compulsory inbound pilot.

If you were the pilot about to embark the vessel, what would be your thoughts when confronted by this arrangement?

The most cursory examination of this arrangement clearly reaches the conclusion that the arrangement is not compliant due to the lack of a spreader step for the fifth rung from the bottom. This cannot be a certified pilot ladder!

Closer examination of the ladder securing would seem to show the ladder secured around vent pipes, the enthusiastic looking supervising officer does not appear to be in contact with the bridge and it is hard to identify the presence of the required lifebuoy equipped with a self-igniting light.

The Dutch pilot quite correctly refused to board the vessel until they provided a pilot transfer arrangement fully compliant with the requirements of SOLAS V Regulation 23 & IMO Resolution A 1045 (27).

After re-rigging the arrangement a certified pilot ladder was provided, secured to the deck, a lifebuoy was in position, the crew were wearing lifejackets and helmets and the supervisor was equipped with a radio. Why could this not be done at the first time of asking?

Normally that would be the end of the story but when pictures of the first pilot ladder were posted on the Facebook page the name of the vessel was instantly recalled by some of our members.

This vessel had previously been involved in a serious, potentially fatal accident involving catastrophic failure of the pilot ladder side ropes.

A second photograph of the original arrangement clearly shows distortion of the side ropes above and below the top rubber step. This distortion, if allowed to continue, could eventually have led to another side rope failure.

Clearly the earlier lessons have not been learned.

Original article on LinkedIn
#Dangerousladders Trailer
Kevin Vallance on LinkedIn
What's your opinion on this?
Login or register to write comments and join the discussion!
Read more...

It remains a sad fact that accidents and near misses continue to occur during pilot transfers with frightening regularity. Most of these fortunately do not result in injury, and a surprisingly high number of them are not even recognised for what they are.

Surveys into pilot ladder safety consistently reveal that unacceptably high numbers of pilot transfer arrangements are not compliant with the regulations.

It has been shown that a majority (51%) of pilot ladders is secured by means of D-shackles, when secured at intermediate length. Previous research (Evans, 2020) has proven that this method has only about 50% of the strength of the pilot ladder when secured at full length (“double ended ladder”), or by means of the “endless-sling” method.