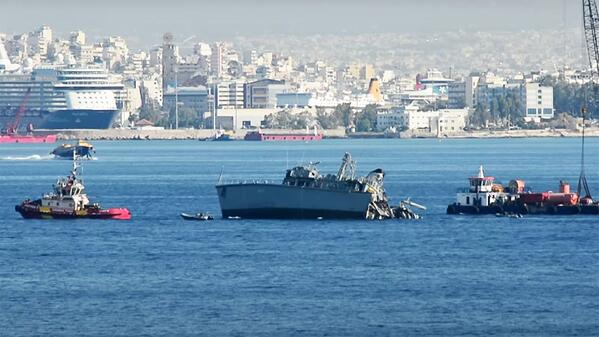 Maersk Launceston, a Madeira flagged containership, collided with the Hellenic Navy minesweeper HS Kallisto (M63) in the Saronic Gulf, off the Greek Port of Piraeus, on 27 October.

The 4,500 TEU boxship, owned by Germany’s John T. Essberger Group, was on its way from Piraeus to the Turkish port of Canakkale when it rammed into the naval vessel, cutting it into two.

Maersk Launceston suffered no obvious damages while HS Kallisto reported water ingress and tilted heavily on its starboard side, according to VesselsValue.

Two crew members of the Greek naval vessel sustained injuries and were transported to the Athens Naval Hospital, the navy said.

The 870-foot, 50,700-gross-tonnage Maersk Launceston had departed Piraeus and was said to be bound for the port of Çanakkale in Turkey. The ship’s present owner is the Essberger company, based in the German port of Hamburg, which describes itself as a “leading operator of chemical tankers within Europe.”

The exact cause of the accident remains unclear, but local media reports described the freighter “passing over” the mine Greek Navy minehunter as the latter was leaving port. The captain of the Maersk Launceston has reportedly been arrested.

No injuries have been reported aboard Maersk Launceston which has a crew of 22 seafarers. Danish shipping major Maersk said that Maersk Launceston crew participated in the rescue operation that was immediately launched by local authorities.

Video: Greek navy HS Kallisto cut in half during collision with Maersk Launceston
What's your opinion on this?
Login or register to write comments and join the discussion!
Read more...

The massive container ship that ran aground in the Suez Canal, halting traffic in one of the world's busiest waterways, is still stuck. The ship, called the Ever Given, became horizontally wedged in the waterway following heavy winds. Nearly 19,000 ships passed through the canal during 2020, for an average of 51.5 per day, according to the Suez Canal Authority.

While in many western countries of the world, pilots there have already been preferentially vaccinated against COVID-19, pilots in other countries such as Malaysia are struggling to get vaccinated.

Video Threefer, three deliveries in a row. 25 mph winds made for a choppy river.

The pilot boat is a 1979 Gladding and Hearn, think of it as a 70s muscle car on water. The Deep-V hull does a great job of cutting through the waves while giving us good speed and maneuverability. On to the next one...
Some parts are sped up to fit 60 seconds.