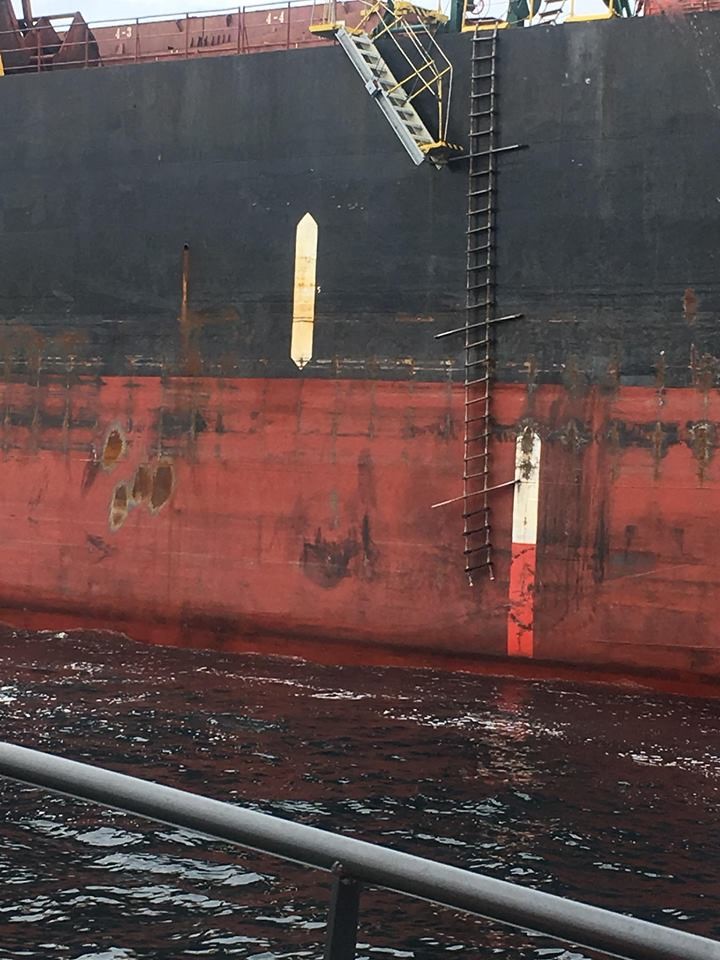 Having first ventured to sea back in 1974, my memory is that occasionally entering or leaving port I would see a vessel with a ‘red and white box’ painted on the ship side. At that time I was working on relatively small vessels with low freeboard and usually undertaking self-pilotage so had no incentive to find out its relevance.

It was not until I became a pilot that I started to take an interest in the freeboard of large vessels before boarding them. Much later after publication of my book the ‘Pilot Ladder Manual’, by Witherby Seamanship International I was asked by Jorge Viso, the President of the American Pilots Association if I knew anything about the origins of the Pilot Line, the short answer to that question was no. Fortunately I had an inkling that I might know somebody who would know.

Although it is often said that ‘pilots don’t make old bones’, fortunately there are still a number of retired pilots who are around to pass on their collective knowledge and experience. My first point of contact was retired Tees Bay Pilot, Captain Geoff Taylor. Geoff who I have known for many years since my days in command running into the River Tees is a former IMPA President. Geoff was able to quickly put me in touch with another retired Tees pilot; Captain Stuart Hellier who it transpires is a major player in this story.
Not for the first or last time it takes a tragedy to shock the shipping industry into trying to find the solution to an ongoing and often well documented problem.

In September 1974 the P&O ferry Eagle, was on passage across the Bay of Biscay from Southampton to the Iberian Peninsula with 170 passengers aboard. She encountered heavy weather and was hit by a huge wave which crashed over the accommodation, smashing wheelhouse windows and causing flooding on the bridge, which disabled all bridge equipment except the engine controls. Due to the continuing storm, the Master of Eagle, Captain ‘Curly’ Renshaw took the decision to divert the storm battered vessel to Falmouth to enable the damage to be assessed and subsequently repaired.

On Eagles arrival at the Carrick Roads pilot boarding area the wind was still blowing gale force with a heavy sea running when the allocated Trinity House Falmouth pilot Captain Laurence (Laurie) Kerr Mitchell attempted to board her. Tragically during the pilot ladder climb, Captain Mitchell fell from the ladder between the Eagle and the pilot launch Kernow. Despite the best efforts of the pilot launch crew, the attending tug and a rescue helicopter Captain Mitchell was tragically pronounced dead when his body was recovered.
On his death Captain Mitchell left a widow and four children has a result of trying in the best traditions of the sea in general and pilots in particular to assist a vessel in distress. In memory of his tragic passing the Falmouth Harbour Commissioners in 1977 named their new pilot boat L. K. Mitchell, interestingly but nothing to do with this story she was the first UK built pilot boat to have an orange wheelhouse.

When Laurie’s widow Mrs Maureen Mitchell tried to sue the P&O Company for liability, despite the fact that her late husband was attempting to render assistance to their severely distressed vessel she lost the case. The United Kingdom Pilots Association asked for contributions from their members to enable an appeal to be made, sufficient funds were raised, but the case at the Court of Appeal was also lost. The defence raised by P & O was that the pilot chose to climb the ladder even though he could see that the ladder was more than 9 metres long, there was then, and remains now no obligation for a pilot to climb a non-compliant ladder.
In the words of Stuart Hellier, “The conduct of P & O infuriated me and I was determined to do something about it – but what? The answer suddenly came to me – the Pilot Mark. I presented the idea at a monthly Tees Bay Pilots Meeting”.

The requirement that the longest pilot ladder a pilot should have to climb is 9 metres is long enshrined in legislation, anyone who has climbed a ladder longer than 9 metres high either intentionally or inadvertently will probably agree it is excessive. Any pilot who has arrived on a launch and had to question the length of a pilot ladder presented to him will appreciate the difficulty this can pose, particularly in this scenario, at night in adverse weather conditions with a severely disabled vessel.
What Hellier proposed to the Tees pilots was a simple, fool proof and effective solution to a tricky problem. Paint a white over red pilot flag on the ship side with the boundary between the colours marking 9 metres freeboard. If any of the red paint is visible, the freeboard exceeds 9 metres and a so called combination ladder must be rigged for the pilot transfer operation.

The task of promoting the concept fell to another Tees pilot the late Captain Gerald Coates. Coates was at that time a member of the UKPA section committee and a founding vice president of IMPA. The idea was put before the UKPA technical & training committee and taken forward at the IMO by another Tees Bay pilot Captain Mike Irvine.

In 1981 the IMPA recommended pilot line made its first appearance. A strong advocate of the pilot line was the then Sydney pilot Captain Malcolm Armstrong, another former vice –president of IMPA. Although long retired from pilotage, Armstrong now a marine artist resident in British Columbia regularly updates his book ‘Pilot Ladder Safety’, in its 6th Edition he makes the following comments;
The International Maritime Pilots’ Association recommends the following mark on the ship’s side to indicate the most suitable place for boarding and to show the pilot whether the height is excessive.
At a suitable position for the pilot ladder to be rigged, a PILOT LINE shall be painted on both sides of the hull to indicate whether the distance from sea level to point of access is in excess of the maximum 9 metres permissible under Chapter V Regulation 23, 3.2 of the SOLAS Convention.

Despite the best efforts of a small dedicated group of then serving pilots who fully appreciated the problem, it is probably fair to say that 45 years after the tragic loss of Captain Mitchell, the IMPA recommended pilot line, which was intended to offer a relatively cheap solution to easily ascertain if a vessels freeboard’s exceeds 9 metres so far as not been given enough publicity or promotion.

Unfortunately use of the pilot mark (illustrated above) is no guarantee that the pilot transfer arrangement will be rigged compliant with the SOLAS 23 regulation. A wise man once told me ‘you can’t legislate for stupidity’.
At the time of reviewing this article (October 2019), the pilot boat L.K.Mitchell is currently undergoing engineering works at the Falmouth Boat Company in Cornwall U.K.

Login or register to write comments and join the discussion!
A community member on 10 October 2022, 23:23 UTC

Article Can you trust your GNSS data?

This important topic is still underestimated in shipping! Can you trust your GPS? Your Galileo? Knowing where the ship is and where to sail next is the main task of navigating a ship and is commonly supported by using Global Navigation Satellite Systems (GNSS). But what happens if the GNSS gets intentionally disturbed?

Every ship transporting goods to, from or through the Arctic wants to find the fastest and safest way through or around the ice. Even service ice breakers save considerable amounts of time and fuel when they choose an easy path through the ice opposed to a straight path.

For nearly 150 years, the Bar Pilots have protected our environment by safely guiding ocean-going vessels through our waterways.

SevenCs, part of the ChartWorld Group, is pleased to announce the release of our ground-breaking ORCA™ Pilot X software. Originally designed as a primary navigation aid for Pilots, ORCA Pilot X is the industry’s leading tool for professional navigators. In an industry first, ORCA Pilot X is being offered as a free download on the Apple AppStore for iOS tablets.