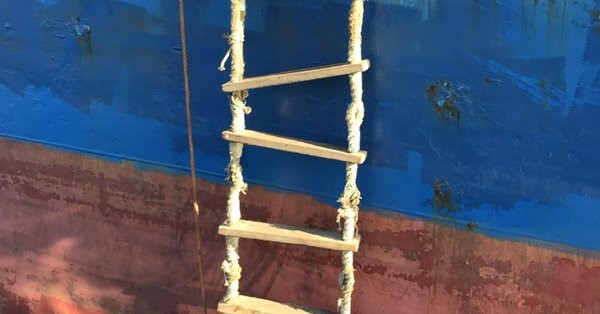 In my opinion the current regulations for pilot transfer arrangements comprising of SOLAS V Chapter 23, IMO Resolution A. 1045 (27) and the technical guidance from ISO 799 will, if followed diligently and in the spirit with they were intended, provide a relatively safe means of embarkation and disembarkation.

However, there is one area of operation where the regulations fail to give instruction, namely securing the pilot ladder to the vessel at an intermediate length due to varying freeboard. Both ISO 799 and IMO 1045 require a thimble eye to be included in the pilot ladder construction with the intention being that this thimble is used is used to ‘lash ‘ the ladder to the strong points required under IMO Resolution A.1045 (27) 2.1 Position and construction

2.1.1 The securing strong points, shackles and securing ropes should be at least as strong as the side ropes specified in section 2.2 below.

This requirement would appear to assume that all ladders are used to their full length with no thought having been given to the varying freeboards which may actually be encountered during a ships operational life span.

Vessels with large open deck spaces, such as tankers or bulk carriers may be able to make allowance for different freeboards by providing a number of deck securing pads. But vessels with restricted deck space or ship side doors ( typically PCC’s and container vessels) will not have this option and will be required to attach and secure the ladder to the tested anchor points which should be provided.

When securing a pilot ladder in place it is imperative that it is secured in such a way that the ladder cannot slip and that the weight of the ladder (and the pilot on the ladder) is transferred directly through the side ropes to the ships structure.

However this practice is deemed by the UK Flag State Administration to be noncompliant with SOLAS V 23, additionally PTR Holland a well-respected pilot ladder manufacturer consider the practice to be ‘very dangerous’. 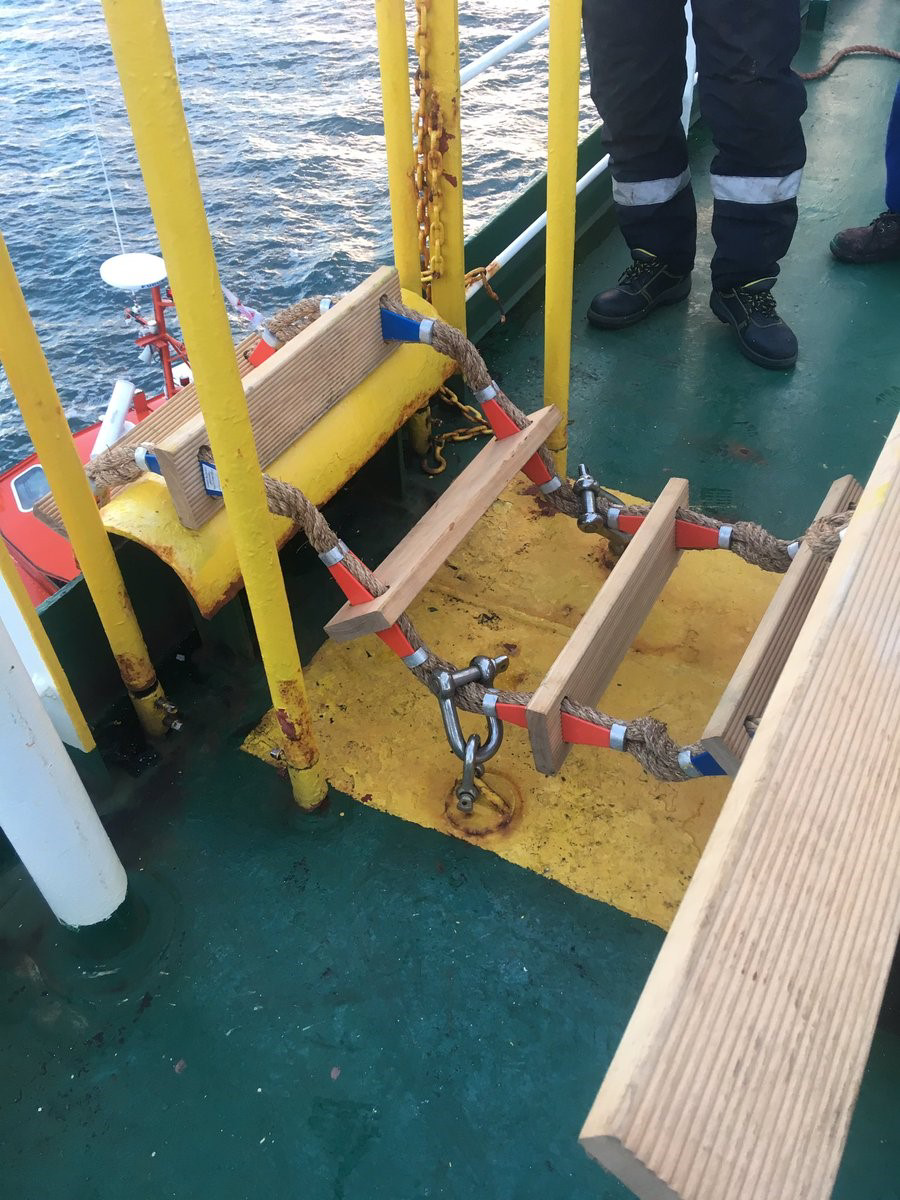 In figure 1 the use of double shackles in the securing method gives a high probability of the ladder slipping when the pilot puts his weight fully onto the ladder.

There are a number of reasons why shackles over side ropes for securing the pilot ladder at intermediate lengths is considered to be unsafe and noncompliant with the regulations, these include:

• If the shackles are secured just below a ladder step, this is similar to the use of step hooks, the forces exerted onto the step are not those to which it was designed or tested for. To recap, each individual step is designed to take the weight of one pilot and is tested to 8 kN force. Side ropes are tested to 24 kN force, it is acknowledged that the side ropes are designed to take the weight of the pilot and the ladder. It must be appreciated that this is a static test and does not take into account the dynamic forces which can be exerted on the ladder being dragged in the water or by contact with the pilot boat. When shackles are hard up underneath a step the arrangement is only as strong as the whipping or mechanical clamping system used. 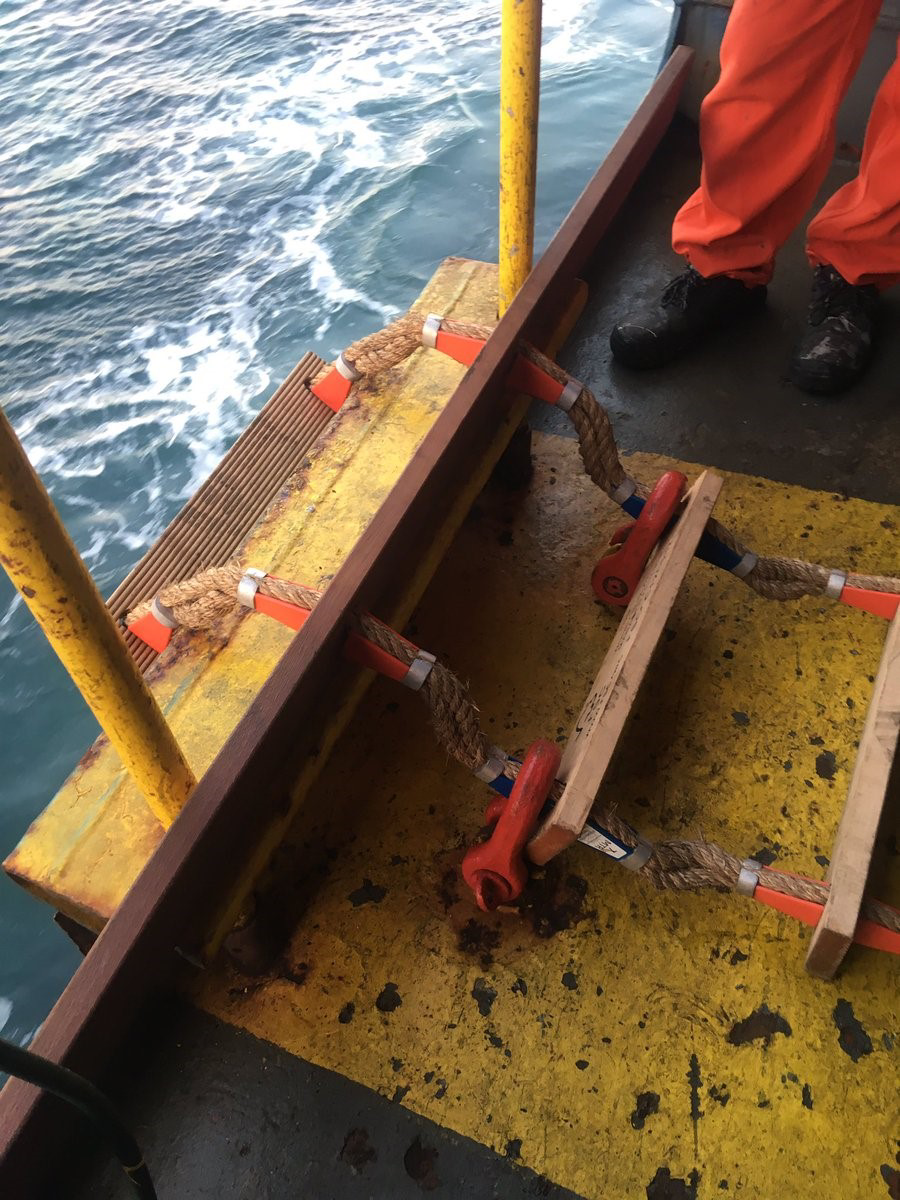 Figure 2 shows a shackle with a large radius jaw fitted over the clamping device, although in this case the spreader step is taking weight, imagine if you can the arrangement without the spreader step, again there is potential for slippage.

Whichever clamping device or method is used in the construction its purpose is to hold the steps horizontal by preventing them from rotating, damaged support mechanisms will lead to uneven or potentially non-horizontal steps. Securing as in figure 2 provides a high possibility of clamp damage. 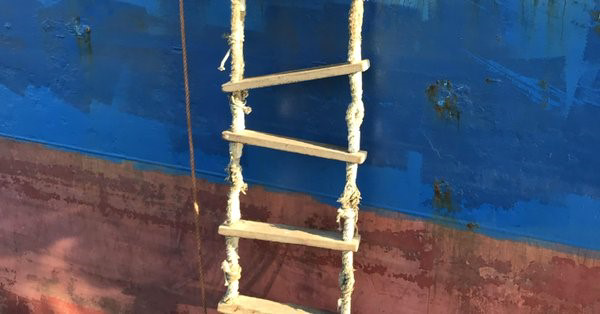 Figure 3 shows a ladder where the whippings have failed and steps can clearly be seen to be uneven and not horizontal.

• By exerting unnatural tensions into the side ropes for which they were not designed the side ropes can be distorted and weakened. This has been mentioned as a causal factor in incidents where the side ropes have parted. If distorted, weakened side ropes are used over a sharp edge there will be a high probability of them failing and parting. Distortion caused by the use of shackles over side ropes is illustrated in 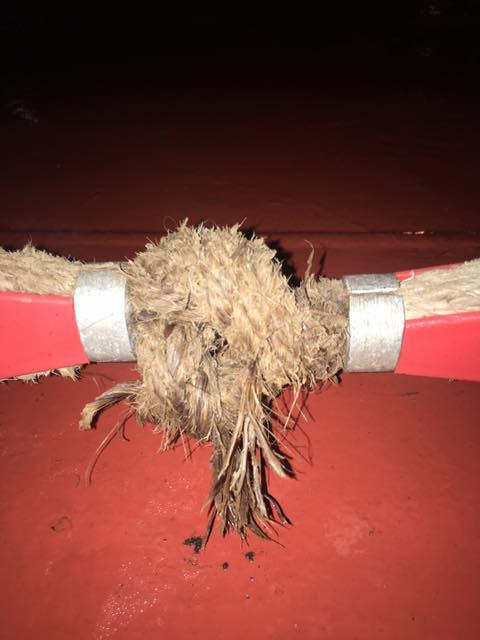 • On more than one occasion the pin from shackle has been dropped from a vessel onto the deck of the pilot launch.

One argument put forward in favour of using shackles is that the shackles are not the problem but it is the load angles put into the system when it changes direction from horizontal across the deck to vertical down the ship’s side that causes the distortion. 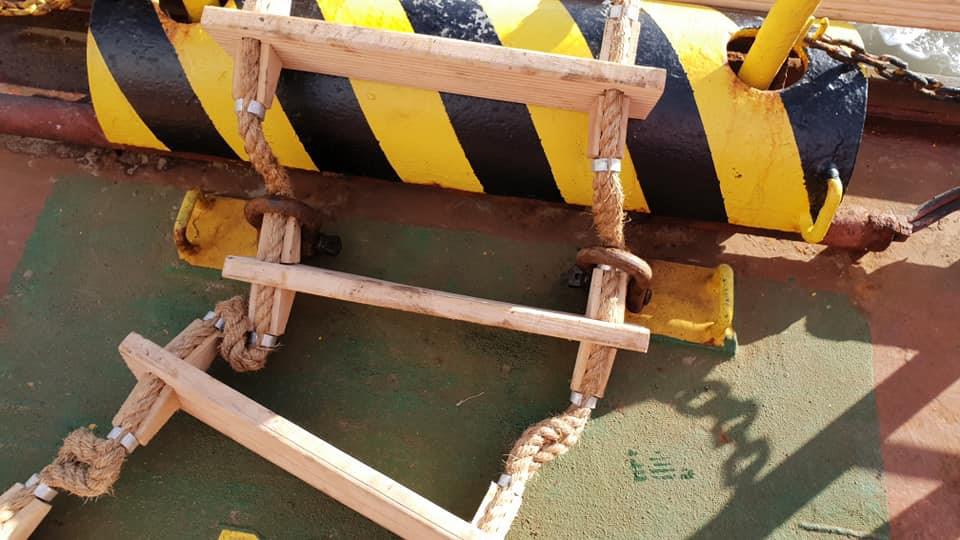 Figure 5 shows an arrangement where a ‘large radius pipe’ has been constructed to reduce the load angle. Distortion in the side ropes is clearly visible.

Although an arrangement such as that shown in figure 5 removes the sharp edge problem it still does not address the issue of how close to the ship side the ladder securing should take place.

There have been a number of incidents reported where a pilot during embarkation reached above the deck edge and grabbed a section of pilot ladder inboard from the securing arrangement i.e. they grabbed an unsecured section of pilot ladder. On at least one occasion a pilot doing this fell from the ladder and suffered career ending, life changing injuries. If the securing points were place at arm’s length from the ship side then this potential problem would be removed. Within the section of Resolution A 1045 which deals with ‘Installation of Pilot Ladder Winch Reels’, section 7.4 deals specifically with securing of the pilot ladder where it is stowed on a reel. The resolution clearly identifies the need for the securing of the ladder not to rely solely on the support of the pilot ladder winch, the pilot ladder should also be secured independent of the winch reel and be secured at deck level 915 mm measured horizontally from the ship’s side inwards.

This securing of the pilot ladder 915 mm horizontally from the ship’s side would be a good distance to secure ALL pilot ladder arrangements and would remove the possibility of a pilot inadvertently grabbing length of unsecured ladder during disembarkation.

One of the arguments used against the use of strops to secure the pilot ladder at intermediate lengths between the steps is the size of rope that would be required. The strops must not be the weak link in the arrangement so they would need to have a SWL greater than 24kN. There is no need for them to be manufactured with manila. Suitable non-slip manmade cordage could be used, an identifying strand could be spun into the threads and each strop could be supplied with a test certificate.

Figure 6 illustrates a type of strop which could be used.

This resolution was agreed on 20th December 2011, the legal document SOLAS V Regulation 23 Pilot transfer arrangements came into force of July 15th 2012. Although the changes which came into effect with the implementation of these two documents was very positive, there continue to be many vessels offering noncompliant pilot transfer arrangements. This can be partially attributed to declining seamanship standards and lack of guidance and instruction in how to safely secure a pilot ladder, in particular where the ladder needs to secured at an intermediate length.

If an amendment to Resolution A1045 was made on the lines of that below I believe it would remove much of the current ambiguity which appears to cause confusion for so many.

2.1 Position and construction
2.1.1 The securing strong points, shackles and securing ropes should be at least as strong as the side ropes specified in Section 2.2 below
2.1.1.2 The securing points should be sited at deck level not less than 915 mm measured horizontally from the ship's side inwards
2.1.1.3 For securing at intermediate lengths, when the full pilot ladder to the thimbles is not deployed, the preferred method of securing is by using a rolling hitch tied with certified strops over the side ropes and between the clamping systems employed.
2.1.1.4 The strops used in 2.1.3 shall be certified to at least 25kN, and shall have an identifying thread through their construction, these strops may be made from appropriate man-made fibres.

March 8th 20201. Bulk carrier Camila outbound from Lough Foyle after carrying grain to Foyle Port at Lisahally. For this video I focused on the Foyle Leader and Foyle Pilots as they chased the ship to the outer portion of the lough where it enters the open sea.

Unissued / Unused material - Hamburg, West Germany (FDR - Federal Republic of Germany). German helicopters are used to carry river boat pilots to where they are needed. Big CU Helicopter pilot talking into mouthpiece. Aerial view from helicopter of boat below. MS as the helicopter comes in and lands on deck of the ship. Various shots as pilot is picked up from lightship and flown off in helicopter. LS From bridge of ship as helicopter flies overhead. CU Small bird sitting on capstan. (f.g....

Editors Note: Unfortunately this YouTube video - although publicly available - was not authorised by the responsible official bodies. Out of respect for the local organisation, we have decided to stop showing the video link to YouTube here. We ask for your understanding!
Join us as we take a pilot 5 miles out to sea to meet a huge 80,000 ton oil tanker arriving outside Port Phillip Bay in Melbourne, Australia!

Video This is how a pilot boarding ship

by "Mallu Sailor" on YouTube
Do you know how difficult to board a ship through pilot ladder.

Niugini Pilots Limited is Papua New Guinean owned Marine Pilotage company operating in Papua New Guinea that was established by our Chief Pilot and Managing Director, Captain Max Taikika Stoessel.
This video highlights our company's work and operations on a daily basis with a short interview with Capt. Max.

Article Education And Training Of Pilots In The Netherlands
44