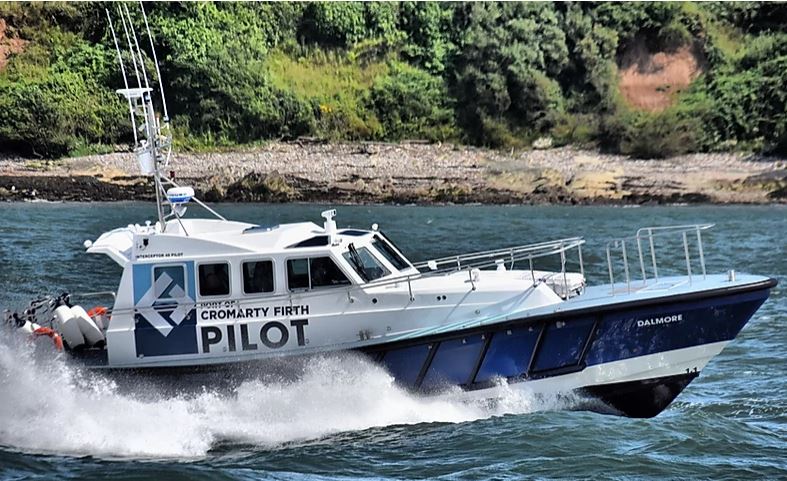 The upgrade is part of a £1 million investment, with the new vessel to patrol the waterways and support visitor traffic, including cruise ships, warships, and oil platforms. The contract for the work is currently being put out to tender and interested parties are encouraged to apply before the deadline of 8 May, 17.00.

The new vessel will be used by pilots employed by CFPA to ensure the safety of passage for ships visiting the port.

Bob Buskie, Chairman of CFPA, said:
"This second contract will represent a significant investment of over £1 million in two new pilot boats over the last 12 months. This new boat will replace one of our older vessels which has served us very well. It will be state of the art and will give us more capacity at peak times. These boats will ensure pilotage in the harbor for years to come."

The latest figures from CFPA put the value of the port to the highland economy at around £275 million.

The latest ship from 2019, named Dalmore after an area on the banks of the Firth, was built by Safehaven Marine in the Irish county of Cork and replaces its predecessor, which had patrolled the waterways for 45 years before retiring. An official inauguration ceremony was held to christen the Dalmore.

The new vessel is expected to be similar to the Dalmore, which is 48 feet long and can travel at speeds of up to 25 knots, equivalent to 29 miles per hour.

Today we have talked to  Frank Kowalski, Managing Director at Safehaven Marine

PSA Marine has awarded a contract to Lita Ocean to build 2 units of a new-generation, heavy-duty and high-speed pilot launch.

HamiltonJet unveiled its new Electro-Hybrid Drive (EHX) system – innovative technology that offers all the advantages of electric drive with the full capabilities of diesel.

by Marine-Pilots.com - published on 5 November 2020

Port authorities in Antwerp, Belgium, are making use of EMSA’s Remotely Piloted Aircraft System (RPAS) to support their day-to-day monitoring of port operations and rapid response to pollution incidents in the port area. The RPAS will enable the authorities to inspect at a distance their complex port environment which extends over an area of some 120km².