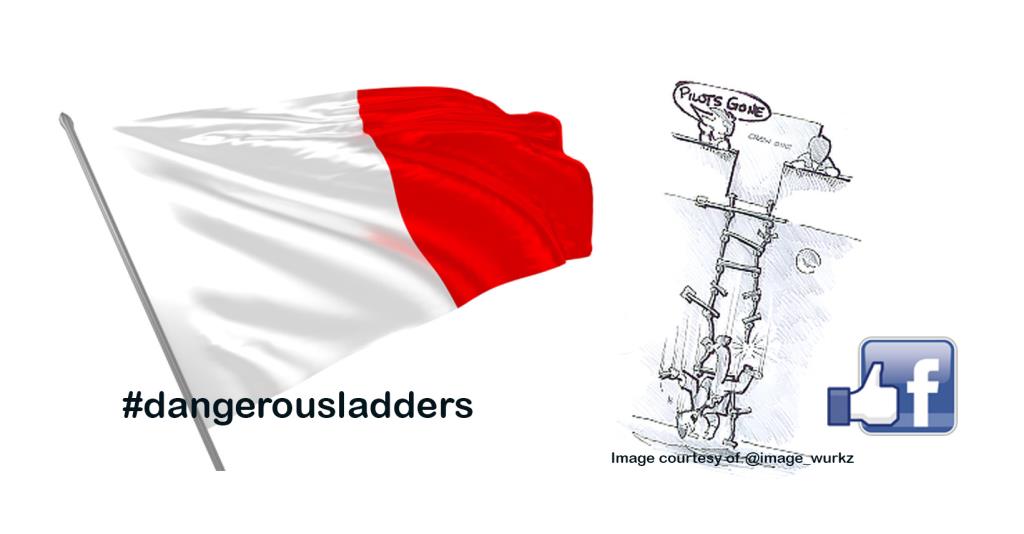 pictures and article by Arie Palmers

The “DangerousLadder” page on facebook is nowadays a very well known community in the maritime world. It is steadily growing towards 3000 members, which will be the next milestone membership-wise.

The page is not public but closed, so participants need to be admitted to the page. Anyone with a maritime connection, which will be checked by one of the administrators, will be approved to have access to this page.

The purpose of the page is explained in the prefix by Christopher Young (Fidra Films, has made some wonderful footage on pilot ladder safety), who was one of the early administrators and was involved from Day 1 in the Facebook campaign.

“This group is to support the #dangerousladders campaign that began on Twitter to improve the safety of maritime pilots – especially, pilot transfer arrangements. Feel free to post anything you think is relevant – we’ll slowly work out how best this group can combine with the Twitter hashtag campaign and other initiatives.”

As you will read on the page, this statement was posted on the 4th of september 2017, the birthday of this page. Before that, the campaign was started on Twitter by Valencia pilot launch coxswain Ignacio Chofre as early as August 2013, who then posted his first tweet on this matter. At that time Kevin Vallance and Don Cockrill were both also already involved in the Twitter campaign, and have been very supportive ever since. A lot of people have tweeted about the dangerousladder campaign since the start, and also getting acquianted and even befriended. In 2017 Ignacio and deep sea pilot Kevin Vallance had a talk about how it would be possible to reach a bigger audience and they agreed to start a page on Facebook, and that now has over 2600 members.

At first mainly pilots joined the page however more recently we have seen a steady growth of membership with basically everyone from the maritime business participating. This includes ship crews, surveyors, psc-officers, vetting inspectors, class agencies, ladder manufacturers, shipping company owners and employees and NGOs. It could be said that the page has grown in 3 years time to a huge group which may be considered a Thinktank, and it is now taken very seriously by the maritime industry. Many people have found contacts through this group and a lot of developments have started via this group. I would like to highlight a few of them that have become well-known throughout the maritime industry with the first being Pilot Pete and the Pilot Pete calendar. Thoughts were to create a calendar on pilot ladder safety, mainly to show good and bad practices in a clear and simple way. To achieve this contact was made with Mark Harvey, a well-known artist and illustrator. Designs made by Mark were posted on the DL page for comments and remarks. This was a long and extensive process which eventually led to the Pilot Pete calendar (thank you again, dear sponsors!!). This calender has subsequently been distrubuted to many vessels worldwide. The first version of the calendar was completed after extensive engagement between Mark and Steve Banks, pilot and NZ Maritime Pilots Association president. That version went to print with sponsorship from all 13 port operators in New Zealand.

The famous retrieval line poster was also developed after seeing photos on DangerousLadders. A lot of pilots now carry copies of this poster in their bags to hand out on board the ships they pilot, as we have seen that incorrectly rigged retrieval lines are the most common error we see today. Yes it is an easy fix, but language difficulties often make it hard to explain and this notice has resolved that problem.

first got involved in the page in 2018 when after 2 accidents with minor injuries in one week, a colleague pointed out the DL page to me. From Day 1 the page has been very educational and informative to me, with a lot of photos of bad examples and explanations of the rules. On some occasions the names and destinations of vessels with a dangerous PBA have been displayed on the page, however this is entirely up to the member who made the post. This is done absolutely not to name and shame any vessel or company, but to merely warn the collegues in the next ports that a ‘special vessel‘ is coming their way. As a result of my membership I have recently written some articles on pilot ladder safety, in the hope that this will result in better knowledge and practice towards pilot boarding safety. At the start of 2020 I was asked to be one of the administrators of the DL page.

The DangerousLadders page is a completely independant campaign which is not tied to any NGO in the business. Of course ‘our’ NGOs EMPA and IMPA are taking a serious interest in the page, and we always welcome their comments and feedback.

At the time of writing, DangerousLadders is a steadily growing community which will hopefully lead in the near future to better and safer pilot boarding arrangements. After all zero incidents and zero casualties must be the goal for all!

I hope this article has made things clearer about its origins and the main goals which all of us should try to achieve.

Before you, you see my third article on pilot boarding arrangements. After my two previous articles
(‘1000 ways to secure a pilot ladder’ and ‘1000 ladders around’, I have received a lot of feedback and
also questions to get deeper into the matter of combinations and embarkation platforms.

Jacobsen Pilot Service and Los Angeles Pilot Station published a notice to all ships to inspect pilot ladders before the pilot boards.

Reason is an incident happened at the port of long beach in July 2020. Pilot ladder rope broke while the pilot was on the ladder - luckily the pilot was able to hold on.

Pilot onboard for Docking to Port of. Klaipeda Lithuania.
#seamanslife
#Bahaynabakal

Brief footage of a maritime pilot disembarking the Disney Magic and boarding his pilot boat as we left Nassau in January 2022.

Video Pilot boarding in the ice

In our new section “Five questions for ..." Marine-Pilots.com introduces pilots and other market players to our readers in short interviews. Today we have seven questions!

We have talked to Capt. Gajanan Karanjikar, President at All India Maritime Pilots association

Article Education And Training Of Pilots In The Netherlands
569