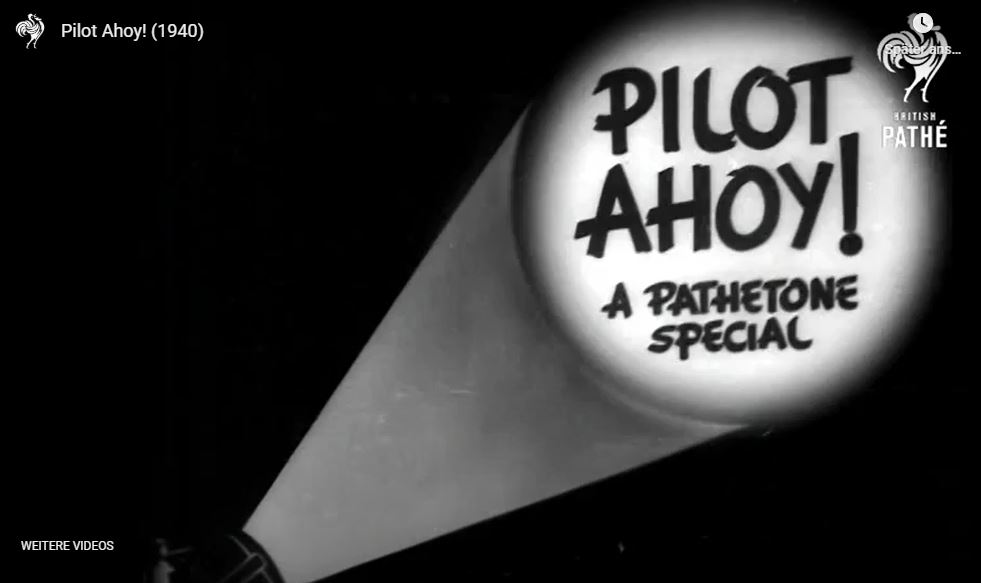 Let us start a journey back in time.
Back to the black and white films of history. The times have changed, but it is good to know what kind of things have changed and where are the roots of pilotage. You can better understand what kind of improvements was brought to your job by technology and the changing of many circumstances around piloting. You could not find a computer there. No exact weather and tide forecast. Pure seamanship. Enjoy our special list of videos.


"PILOT AHOY! A PATHETONE SPECIAL - New York"
We are starting our journey in New York (USA) in 1940:
Good aerial views of dozens of merchant ships entering New York's harbour. Various shots of life aboard a New York pilot cutter. The pilot is rowed out to a merchant ship, goes aboard and then is picked up again. Apprentice pilots on board a training ship scrub the decks, lower a rowing boat over the side and study charts with a senior pilot to become familiar with the harbour.

A pilot boards a luxury liner. Good shots of the New York skyline as the pilot issues instructions to take the liner out of the harbour. He is collected by a launch. General view of a pilot ship on the water.
watch video


River Thames Pilot (1960-1969) - no sound
Various shots following a river pilot. He is seen disembarking from one boat and climbing up a rope ladder onto a large ship.
Various shots of another river pilot, dressed in a cap, woollen jumper and sea faring jacket. He is seen at the wheel of his boat.

Various shots of two river police pilots on the River Thames in London. They are filmed in the cab and on the deck of their boat. They pull up alongside some riverboat houses and talk to a woman who owns one of the them. Back in their boat, there are now three river pilots making their journey along the Thames. CU. A river police union Jack flag at the back of the boat. VS. The boat drives alongside Victoria Wharf and London dock lands. VS. An RAF helicopter hovers alongside the police boat before flying off into the distance. CU. Another helicopter flying away.
watch video

Big CU Helicopter pilot talking into mouthpiece. Aerial view from helicopter of boat below. MS as the helicopter comes in and lands on deck of the ship. Various shots as pilot is picked up from lightship and flown off in helicopter. LS From bridge of ship as helicopter flies overhead. CU Small bird sitting on capstan.
watch video


Trinity House Pilot Cutter (1953) - Southampton, Hampshire
Various shots of Trinity House pilot cutter "Penda". M/S pilot's bridge. M/S as Second Officer Harry Goddard leaves the bridge and walks along the deck to his cabin. He takes his cap off, sits down at a table and looks at an album. C/U of his collection of matchbox labels. M/S Goddard sticking in more labels. C/U's Goddard and album. Various shots as he sticks in the labels. M/S of Pilot Knight and Captain Jolliff seated at desk. A waiter enters their cabin and hands them both a cup of tea. C/U officer's hand marking chart. M/S of the two men playing bridge. C/U's of their faces. C/U captain holding cards.

M/S wireless room. The operator hands message to deck hand. M/S as he walks along and delivers the message to Captain Knight. M/S as he opens the letter. He hands message to Jolliff who gets up from the table and puts on his hat and coat. C/U Jolliff speaking to Knight. M/S as Knight leaves the cabin and walks along deck. He goes down rope and onto motor launch waiting for him. Captain Jolliff watches as he leaves. M/S of him on boat heading towards liner "Llangibby Castle". M/S's as he boards the vessel and greets crew. M/S as white and red pilot's flag is run up. M/S as Knight greets captain Whatley and go onto the bridge. Various shots as Knight guides the ship under the command of Whatley. M/S as they consult the map.
watch video
watch more videos by using our search console

Look at Life - City of Sailors - Portsmouth - 1965
Portsmouth is no longer the sea-faring city it once was; this film from the Documentary Series "Look At Life" Volume 5 - Cultural Heritage in 1965 looks at its changing face.

The Saint Lawrence Seaway is a system of locks, canals, and channels in Canada and the United States that permits oceangoing vessels to travel from the Atlantic Ocean to the Great Lakes of North America, as far inland as Duluth, Minnesota, at the western end of Lake Superior.

Look at Life Vol 01 Transport Pilot Aboard 1963
The story of Britain's pilotage services.

The name tag plate on this ladder displays a few important items that can be cross referenced with the certificate: Type, Model, Length, Production date, as well as the serial number (Prod.No) and the approval standard.

Article Study: Sleep deprivation and the impact on Maritime Pilots

This study sample consists of a group of healthy middle-aged maritime pilots (n=20), who have been exposed to highly irregular work schedules for more than 15 years.

A pilot ladder is a highly specialized form of rope ladder, typically used on board cargo vessels for the purposes of embarking and disembarking pilots.

by Marine-Pilots.com - published on 9 February 2021

Opinion Column I keeping the Pilot safe (by Michael Grey)
213