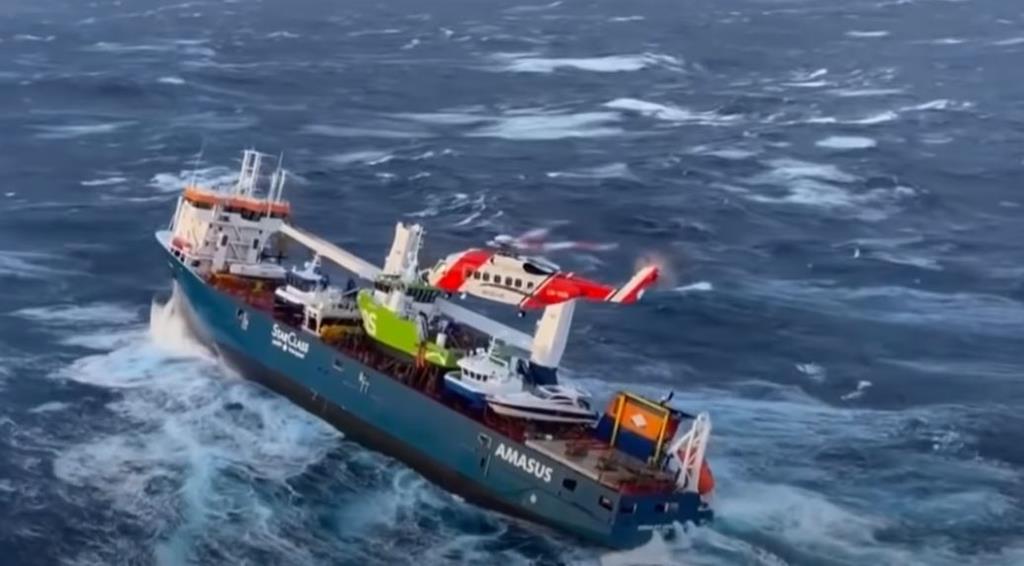 The Dutch freighter "Eemslift Hendrika", which was in distress at sea, was secured on Thursday night. Salvage crews succeeded in boarding the ship and connecting it to two tugboats. This was announced by the Norwegian Coastal Administration. It will now be towed to the harbour of the Norwegian city of Ålesund.

In view of the weather conditions, it had previously been feared that the 112-metre-long ship belonging to the Dutch shipping company Amasus Shipping, with 350 tonnes of heavy fuel oil and 50 tonnes of diesel on board, could run aground. This could have polluted sensitive natural areas in the area.

The freighter had been drifting without crew for days in the North Sea between Bergen and Trondheim. The "Eemslift Hendrika" was on its way from Bremerhaven to Kolvereid in Norway when the ship took a heavy list in stormy seas, Norwegian authorities said on Tuesday. The crew of twelve had sent out a distress call on Monday and were rescued from the freighter by helicopter.

Video: Salvage operation EEMSLIFT HENDRIKA
What's your opinion on this?
Login or register to write comments and join the discussion!
Read more...

The Good Practice Guide for Pilots 2021 describes the knowledge and skills (technical and non-technical) that the NZMPA believe all pilots should aim to achieve and maintain. It is written primarily for pilots for their own guidance and professional development, but can be used as a framework for pilot training, proficiency and assessment. It is referenced to NZ Maritime Law and Codes.

Sea transport has for many years been a reserve of men with few women getting the opportunity, especially in most African countries. But for Fatouma Ali Ahmed, women can equally steer ships just as men can do.

Video Information about novel Coronavirus from the World Health Organization (WHO)

What do you know about the novel Coronavirus that is causing a health emergency? Coronaviruses (CoV) are a large family of viruses that cause illness ranging from the common cold to more severe diseases such as Middle East Respiratory Syndrome (MERS-CoV) and Severe Acute Respiratory Syndrome (SARS-CoV). A novel coronavirus (nCoV) is a new strain that has not been previously identified in humans. Watch this short video to find out more. Further resources are available online here: https://...

“The current plight many seafarers are facing, unable to crew change or return home, is being described by many voices within the maritime community as the next humanitarian crisis.”