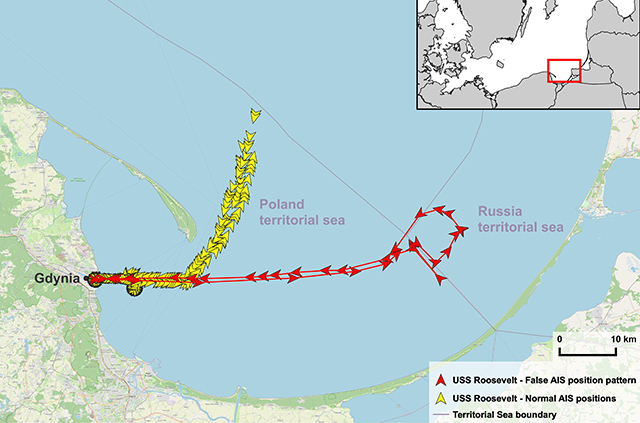 Analysis of tracking data from Automatic Identification System broadcasts reveals vessel locations have been simulated for a number of ships, including military vessels. This false information could compromise vessel safety, decrease confidence in a crucial collision avoidance system and potentially spark international conflict.
Over the years, data analysts working with Global Fishing Watch and SkyTruth have noticed a number of ship tracks coming up in impossible locations—in transit over Antarctica, circling in the Utah desert and elsewhere—and we have questioned whether these false positions resulted from faulty Automatic Identification System (AIS) transmitters, deliberate misuse of those transmitters, or from intentional third party interference. AIS is the international system of vessel radio broadcasts used to identify vessel locations and help prevent collisions at sea. We have learned how to interpret anomalies in AIS data and, even when the ship coordinates were wrong, we never had reason to doubt that these vessels were on the water broadcasting AIS. In most cases, we are also able to identify the true position of the vessel.

Recently, I came across a new category of false AIS ship positions. In past cases, we observed vessels on the water that were broadcasting positions that corresponded to an area other than the true location of the vessel. In these new examples, however, AIS tracks were present where vessels appear not to have been actually broadcasting AIS at all. Unlike some obviously false tracks appearing on land, these tracks appear extremely plausible—at first glance indistinguishable from real AIS positions. This new type of simulated AIS tracks represents a significant threat to data integrity and underlines the need for vigilance when interpreting AIS data.

Simulated sailboat races: First large-scale case of falsification
I first noticed these false AIS tracks in groups of sailboats which appeared hundreds of miles out in the Atlantic Ocean even though shore-based AIS antennas appeared to receive their positions. Since a typical range for a terrestrial antenna is at most about 60 miles, I knew something was wrong with these positions. When I searched for more information on the identities of these vessels I found that they were featured on a website running simulated sailing races. Whoever was setting up the races not only simulated realistic AIS positions for each of the participants, but then fed these made up positions into a public AIS site — sites like AISHub receive ship positions from contributors — so that the sailboat positions appeared on these sites alongside real vessel traffic. While this false data would be unlikely to interfere with real-time navigation (the very high frequency radio broadcasts which relay AIS information between nearby vessels were not affected) the data gathered on these sites is passed on to other data providers and subscription services used for marine monitoring and analysis. Made-up sailboats may seem harmless enough, but many professionals count on AIS as the most comprehensive and reliable data source for monitoring and analyzing activity at sea. If these sailboat tracks could be so realistically faked, what about false data for more significant targets?
Read full original article here (skytruth.org)
What's your opinion on this?
Login or register to write comments and join the discussion!
Read more...

Dr James Fishwick, Head of Smart Sound Plymouth gives an introduction to Smart Sound Plymouth and explains how it can be accessed and the equipment available.
This is a recording of the webinar given on the 17th June and is the second in a programme of webinars organised by Plymouth City Council which showcases the thriving marine sector in Plymouth, UK.
You can view the full programme of webinars and register for them here:
https://www.eventbrite.co.uk/e/oceansgate-marine-technology-webinar-...