More details and an analysis of the Ever Given accident 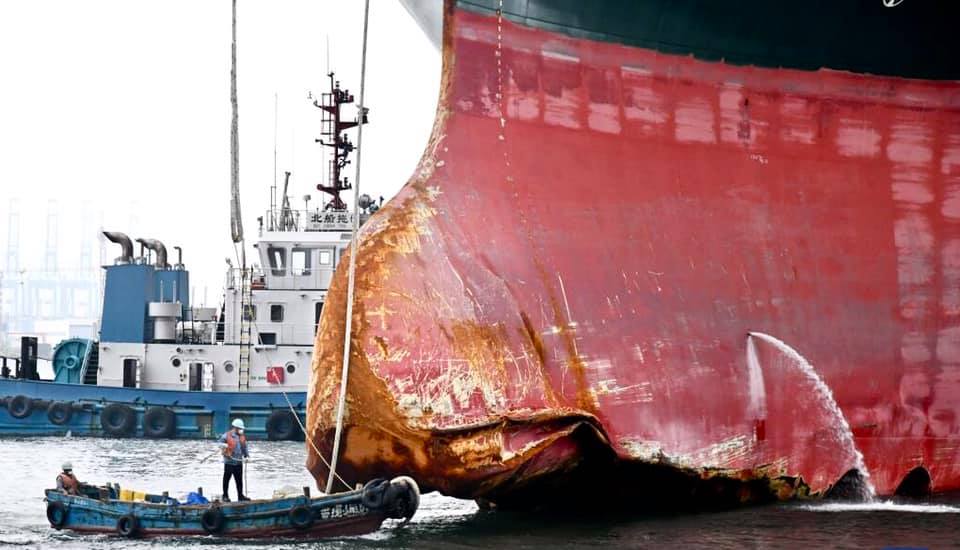 For "Der Spiegel" (a German newspaper), an experienced pilot and ex-captain analysed the accident of the freighter Ever Given, which blocked the Suez Canal for days, on the basis of documents. His conclusion: the captain and pilot made serious mistakes during the passage.

The accident of the freighter Ever Given, which ran into the bank of the Suez Canal on 23 March and blocked the canal, resulted in costs of several hundred million: For six days there was no way through the canal; 400 ships had to put up with expensive waiting times.

A sandstorm
was always cited as the explanation for the incident. But the experienced seaman Gerald Immens (62), a long-time captain of tankers and today an instructor and pilot in the Kiel Canal, has another explanation for the disaster. After analysing publicly available data on the fateful voyage of the Ever Given, he concludes that both the captain of the 400-metre-long ocean liner and the pilot on board made serious mistakes, as he explains in an interview with "Der Spiegel".

Photo social media
Captain made a serious mistake
Gerald Immens considers it "nonsense" that the weather was responsible for the accident. Immensely: "A ship like this even sails in thick fog," he explains. At the time of the accident, there were stormy winds, but they came from behind and did not play a decisive role. However, when the ship entered the canal, it was affected by a considerable crosswind, which reacted sensitively due to the large side area and the thousands of containers on board.

According to the expert, the captain had to compensate for the so-called offset due to the crosswind and correct his course to do so. Since "you can hardly see any water" from the bridge of a huge ship like the Ever Given, the captain and pilot have to rely on GPS data and electronic sea charts for navigation. Immens explains: "Immediately after entering the channel, this AIS data shows a 'heading' of 48 degrees: that is the course the ship is steering - and also the course that could be read from the nautical chart. But over ground, the Ever Given does not keep this course due to the strong crosswinds; she actually only sails around 42 degrees - i.e. towards the left bank of the channel.

Passed through the channel at top speed
So this deviation should have been "added to the course", i.e. the ship should have moved to 54 degrees. But this did not happen for several minutes - according to Immens a "serious navigation error" and an "obvious lack of understanding of the physics of how a ship behaves in such a canal journey". As a result, the Ever Given came closer and closer to the left side of the canal. Then a hydrodynamic effect was added in a fatal way: the mighty mountain of water that the freighter was pushing in front of it pushed the ship to the right at the front, while it was sucked to the left at the back.

In order to compensate for this so-called banking effect, it was decided on the bridge to give more speed, so that the rudder is more strongly impelled and the ship reacts more quickly. "In the short term, this is quite correct," Immens explains. "However, it must not cause the ship to speed up permanently, because then the hydrodynamic effects become much stronger." But this is exactly what happened, he says: Although the maximum speed in the canal is eight knots (just under 15 kilometres per hour), the Ever Given had accelerated to 12.8 knots (22 kilometres per hour).

The ship came away from the left side, but then raced towards the right bank of the canal, whereupon the captain accelerated again - the ship came away again and raced towards the left bank once more. Finally, the giant freighter crashed into the bank at almost 13 knots, whereupon it turned and hit the eastern bank with its stern and became wedged: The Suez Canal was blocked. According to Immens, the accident could only have been avoided if the captain had "done everything possible to reduce speed." But this was not apparent from the data at any time.

"We will never know"
What happened on the bridge between the freighter's entry at 5.10 am and the impact at 5.40 am, Gerald Immens does not know. One thing is certain: a captain is dependent on the pilot, but does not like to give him command. Because the pilot is always on ships he has never sailed before. Immensely: "Imagine you are sitting in an Airbus A380 and the co-pilot says over the loudspeaker: 'I've never flown such a huge thing before and I'm going to try it out today'. You would break out in a sweat." The pilot gives the commands, but the ship's command must "absolutely remain one hundred per cent focused and always pay attention."

After the ship was dredged up in March, Egypt held it until the owners paid a certain sum for the damage. In the settlement, it seems they agreed to keep quiet about who was to blame. And Panama, where the Ever Given is registered, is "not exactly known for in-depth analyses of such incidents." Immensely: "I'm afraid the public will never know what really happened on that bridge."
Source: Interview at www.Spiegel.de (paid content)

Login or register to write comments and join the discussion!
LV
Louis Vest Houston Pilots, USA
The comparison of the Airbus aviator to a ship's pilot is seriously flawed. Pilots all over the world go through rigorous training under observation and apprenticeship before being sent to navigate in their respective ports. In the port of Houston, my port, a young pilot would not be assigned to such a ship until they had completed three years of training and a gradual increase in assignment size... and most are ship's masters before they begin the training.
1
SP
Sanjeev Pande Ocean Sparkle Limited, India
In my opinion, Capt Gerald Immens presents an opinion, not an analysis. An opinion which is seriously flawed. To say that weather was not responsible i.e. did not play any significant part in causing the incident is amazing for me to accept. Especially from someone said to be an experienced sailor and an trainer of pilots to boot. Further, pilots assume the navigational control of a vessel while the command of the vessel remains with its Captain. Orders given by a pilot are not easily countermanded in the normal course. Only when obvious incompetence is being noticed would any Captain or officer on watch countermand a pilot's order. This is well established by numerous decisions in admiralty law cases. The mistake that was made was the pilots not advising the master to wait till the weather forecast improved or (perhaps) the Captain not asking the pilots their opinion on proceeding to transit despite the poor weather forecast. That too without tug assistance. Once comitted into the canal, the Ever Given was a sitting duck!
5
Read more...

On Mar 23, 2021, at around 0500 UTC, Ultra Large Container Vessel EVER GIVEN ran aground in the Suez Canal north of Suez. The incident caused a blockage of the Suez Canal, extensive vessel traffic jams, and disruptions in the maritime supply chain. Watch a 3D video simulation of the last 90 minutes of her journey before the accident happened. The video is based on AIS vessel position data received by FleetMon.
FleetMon is one of the world’s leading AIS vessel tracking providers offering...

This video includes how we transit STRAIT OF GIBRALTAR on the biggest ship in the world (EMMA MAERSK)
I have included some bridge procedures we are required to carry out PRE-ARRIVAL and how MASTER-PILOT exchange is carried out .
For aspiring sailors , do watch the whole video as you will learn how life at sea works , the challenges we face and the pros and cons of merchant navy .
I conduct Q&A session on my Instagram account, so don't forget to follow me there too

Video Pilot disembarkation from tanker at BAY OF BENGAL

Hooghly river Marine pilotage is one of the toughest and longest pilotage in the world,
pilots here face many challenges daily to enable safe passage of ships from bay of Bengal to the port of CALCUTTA and Haldia.
Pilot embarkation and disembarkation is a vital part , where the pilot climbs up or down a rope ladder ,if the free board is more than 9 meters then combination ladder is used it needs very good physical fitness practice and experience to safely embark and disembark from these...

Article Marine Pilots are experts in trusting. They simple have to be....

„In God we trust“ - this short sentence can be found on the one dollar note.
Marine Pilots for example are experts in trusting. They simple have to be....