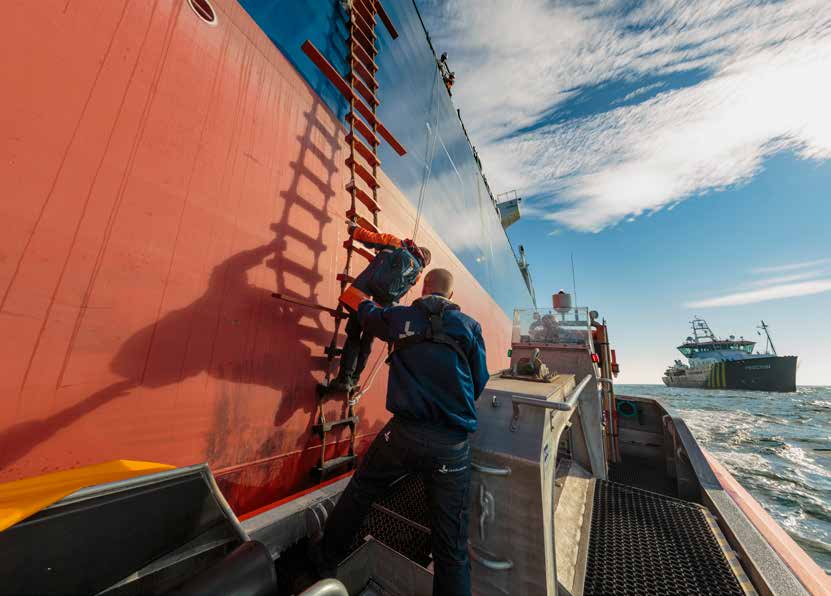 The international pilots association Impa is sounding the alarm about unsafe pilot ladders. According to the pilots, a worldwide survey has shown that access to the ship via the pilot's ladder often does not comply with the regulations. In Europe this is even the case in more than 17% of cases. The need for change is great: every year fatalities occur.

Just imagine: transferring from a pilot boat riding the waves to a tall ship. In stormy weather, at night and at dawn. Pilots risk their lives every day for safe shipping. You might think that the equipment should be in top condition and used properly. But the pilots experience that this is not always the case. They come across defective pilot ladders, with slippery or crooked steps and ladders that have been hung up incorrectly, to name but a few.

Of the 3322 reports made during the two-week survey in October, relatively the most poor assessments ('non compliant') came from Europe (166) and Asia/Oceania (122).

A so-called trapdoor, banned since 1979, is still used on ships.

A so-called trapdoor, banned since 1979, is still used on ships.
Arie Palmers is a Scheldt pilot (Wester- and Oosterschelde) and almost every day he has to transfer to large container ships, tankers and bulkers in the North Sea to bring them safely to the ports on the Scheldt. He says that it is not only the ships under a flag of convenience where the rules are not respected. Also ships of large shipping companies, or under a respected flag, sometimes do not have their affairs in order. The sanction he has in his hands is severe. If I come across an unsafe pilot ladder, I will, if necessary, make them take a round trip until it is safe. Sometimes it turns out that they've found a brand new pilot ladder somewhere. Often the ladder can be made safe with a little adjustment.

Gangway
What goes wrong according to the Impa pilots? Common faults are a ladder that does not adhere to the hull, broken steps, steps that are not evenly distributed, dirty steps and steps that are not properly attached to the ropework.

Above a height of nine metres, a pilot ladder must be used in combination with a gangway. Otherwise, climbing is no longer responsible. The top part of the ladder must then protrude 1.50 metres above the gangway, which is also regularly not the case.

A lead rope with a broken spreader. (Photos Arie Palmers)

A lead rope with a broken spreader. (Photos Arie Palmers)
Most often, it goes wrong with the confirmation of the retrieval line. This is also what Palmers encounters most often. The retrieval line is attached to the end of the lower spreader, which is used to balance the ladder against the ship's hull. The crew can use the retrieval line to pull the ladder up quickly when necessary. That line must point to the front of the ship', says Palmers. Otherwise, there is a risk that it will get stuck to the pilot boat during an unexpected wave movement and take the entire pilot ladder with it. But it is often at the back. I have that changed before I get on the ladder.

Communication
Palmers observes that it is often not a matter of faulty material, but of incompetent handling by the crew. He also often encounters those who hang up ladders not wearing life jackets. Unacceptable according to Palmers. Look, if someone falls overboard, as happened recently, then the pilot boat crew has to fish the victim out of the water'. What also often happens is that no mate or other person in charge is on deck while climbing aboard. This is mandatory, among other things for communication with the bridge, says Palmers. But sometimes he can understand why things are done this way. They have been loading or unloading in the harbour all day and you see a lonely sailor walk up to them. He doesn't feel like getting his colleague out of bed.

International requirements for a pilot ladder. (Source: IMPA)
Palmers has long been committed to safe working conditions. He believes that writing thick manuals with lots of instructions makes little sense. The sailors and other crew members are not going to read them. It's all about training and explaining. For example, I put a lot on social media. Pictures work really well.

He is also in regular contact with the major shipping companies and provides them with advice.

Solas
In its annual report, the Impa makes a comparison with the coronas measures. 'Ships have been quick to introduce precautionary measures. It is commendable that keeping a distance, using mouth masks and washing hands have become standard procedures on board. In contrast, we must unfortunately note that enforcement of the long-standing Solas regulations (on pilot ladders - ed.) is still not improving. Pilots are still being injured or killed during transhipments. As with safety measures around the virus, there needs to be a change in the practice of pilot transfers.'

Wearing inherently buoyant floatation (not inflatable that punctures or fails to inflate).

Not having the hard boat underneath you to fall back on until you are less than ten feet above it.....

All best practices pilots can do, but seem to be rarely seen or mentioned.

Would also love to see injury patterns of what is actually killing pilots coming off ladders, not just speculation.
[show more]
0

On Monday, March 23, 2020, Admiral Osama Rabie announced the successful transit of the Italian passenger ship COSTA DIADEMA in the northbound convoy through the new Suez Canal, coming from the United Arab Emirates heading to Italy. Special measures were applied, as 65 Coronavirus cases were reported on board which required piloting the vessel remotely through pilotage team boarded on two escorting tugs in full coordination with the transit control offices and navigation monitoring stations in a first of its kind scenario in the history of the Suez Canal.

Port of Townsville latest Mantaray HM ORC 173, along with all Port of Townsville’s pilot boat fleet is defined by the Pantocarene designed beak bow vessels that are the forefront of pilot vessel desingn worldwide.