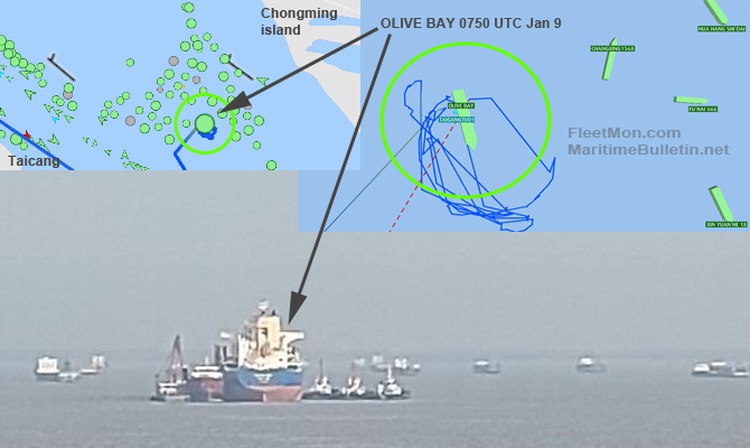 China implemented extremely strict restrictions on pilots activities in a number of ports, including biggest ports along Yangtze waterways, causing massive delays and congestions. Ships have to anchor in space-restricted anchorages, in dangerously close proximity to each other. Witness, Captain of nearby anchored ship, reported to MB an accident, the result of pilots quarantine policy. In December, some 200 pilots were put under quarantine after two of their colleagues tested positive, and de-facto, pilotage prohibitive restrictions were implemented.

According to Captain’s visual observance and overheard radio talks, bulk carrier OLIVE BAY anchor chain entangled with the chain of another ship, on Jan 8 or 9, in Yangtze estuary between Chongming island and Taicang, Shanghai area. Floating crane and tugs responded, trying to disengage chains and free the ships.

Article Livorno: Man steals pilots boat and then sets fire to it

A Dutch man, after having stolen the pilots' boat and set fire to it, sowed panic in the port of Livorno, giving rise to a chase at sea.

It takes all sorts of roles to ensure safe and successful operations at Aberdeen Harbour. Meet Finn, a Marine Pilot, and find out why he enjoys working at the port.