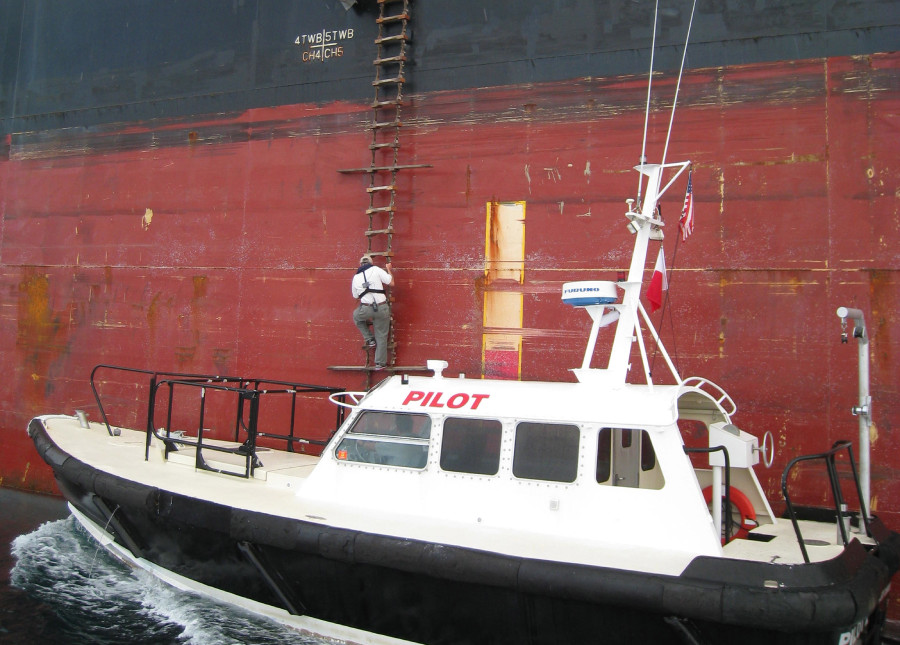 There are some problems that never seem to go away and one is the perennial difficulties in providing a safe way of getting pilots on and off a ship. Not every port can run to a helicopter and not every ship is suitable, but you wouldn’t think that it ought to be an insurmountable problem. Yet year after year, pilots get injured and killed when boarding or leaving ships and reports continue about unsuitable or hazardous arrangements, which pilots have observed all around the world.

In December 2019, 64-year-old Captain Dennis Sherwood, a New York-New Jersey pilot, fell to his death when trying to negotiate a trapdoor arrangement that was being employed to make the transfer between the pilot ladder and the accommodation ladder on a Maersk vessel. This is an arrangement that has been used for ships where the height the pilot has to climb to the point of access is over nine metres, which some might suggest is still quite a height to surmount on a freezing night. Unsurprisingly, pilots have called for this trapdoor arrangement to be banned.
“There are still too many reports coming in about dangerous and often daft boarding arrangements.”

So, after discussion between the International Maritime Pilot’s Association (IMPA) and the International Chamber of Shipping (ICS), new guidance has been published this month. The Shipping Industry Guidance on Pilot Transfer Arrangements is a joint effort from the two organisations and is approved by other relevant bodies, while it also takes in IMO guidance on combination embarkation platform arrangements. Crucially, it provides specific details, including the dimensions of trapdoors that are used on the bottom platform of an accommodation ladder, along with rigging arrangements.

So far, so good. But it might be argued that there are still too many reports coming in about dangerous and often daft boarding arrangements encountered at pilot stations. Some just involve bad seamanship, with the ladder secured to insecure bits of the ship – one that comes to mind was when the pilot, on reaching the deck of the ship, discovered a heavy seaman was holding the top of the ladder, which remained unlashed, with his boots.

“It is the repetitive nature of these accidents that is most depressing.”

There is no getting away from the fact that the sheer size of many modern ships makes getting aboard them from a small craft no job for the faint-hearted, hence the development of ladder-gangway combinations, where getting from the former to the latter involves a certain amount of agility. Some years ago there was enthusiasm for electric hoists on high-sided ships. The hoist would lift the pilot from sea level to the deck in a short time. These proved unreliable, not least because of their winches being in exposed areas, and you would only have to be stuck on one of these things – half way up the ship’s side – to shatter one’s faith in them forever.

Some ships have gun doors, at a reasonable elevation from the sea, so that the pilot’s exposed climb is safer, although there have been problems when the ship is at a deep draught and rolling in a swell, to such an extent that the access itself has been submerged. On one ship, the whole of the reception party nearly got sucked out of the door after the sea can entered.

Nobody ought to be at risk of losing their life going to work or returning home and it is the repetitive nature of these accidents, which by no means always occur in difficult or marginal weather conditions, that is most depressing. It would perhaps help if ship designers were made aware of the pilot’s needs in this respect, because there are not infrequent complaints of new ships that have turned up with features that make boarding difficult. There have been cases where the pilot ladder has been situated not on the ship’s parallel body, but too far aft, where the ladder will not lie on the ship’s hull, and the pilot boat is menaced by its proximity to the propeller. Other dangers come when the ship has been constructed with a rubbing band, or belting, around the hull, which interferes with the fall of the ladder but can be lethal to those on the boat. The designer helpfully leaving a gap in the belting, if anything, makes matters worse.

The ICS/IMPA guidance will surely be helpful, but only if people actually read it and take it on board. There has been no shortage of guidance, advice and instruction available on the relatively uncomplicated business of providing a safe pilot ladder. It is persuading people to take notice of it that is, perhaps, the biggest problem of all.

Sometimes ladders are found to be obviously unsafe and badly neglected, hopefully before somebody has to use them, with treads at a drunken angle or simply broken. A pilot remarked to me that some modern seafarers “don’t understand anything about rope,” and in a ship where there is only steel wire and lashing bars to care for, maybe this might be true. The ICS/IMPA guidance certainly emphasises the need for training.
Original Article by Baird Maritime
Author Michael Grey
Maritime industry legend, and former long-term editor of Lloyds List, Michael Grey kicks off each month with topical issues affecting the maritime world at large.

Baird Maritime
Editor's note:
Opinion pieces reflect the personal opinion of individual authors. They do not allow any conclusions to be drawn about a prevailing opinion in the respective editorial department. Opinion pieces might be deliberately formulated in a pronounced or even explicit tone and may contain biased arguments. They might be intended to polarise and stimulate discussion. In this, they deliberately differ from the factual articles you typically find on this platform, written to present facts and opinions in as balanced a manner as possible.
What's your opinion on this?
Login or register to write comments and join the discussion!
Read more...

The Savannah Pilots Association of Georgia received a brand-new aluminium pilot boat from Snow and Company, a Washington-based boat-builder.

Recorded from a live Zoom program on January 27th, 2022 Captain David Gelinas will discuss Maine's State Pilotage System and how it is practiced on Penobscot Bay. The talk will cover State Law requirements for foreign flag ships, the role of the State Pilot, Training, and local practices. Check out more videos from the Penobscot Bay & River Pilots Association here: https://www.penbaypilots.com/video-gallery/ Captain Gelinas has been a State Pilot for Penobscot Bay and River since 1992. He...