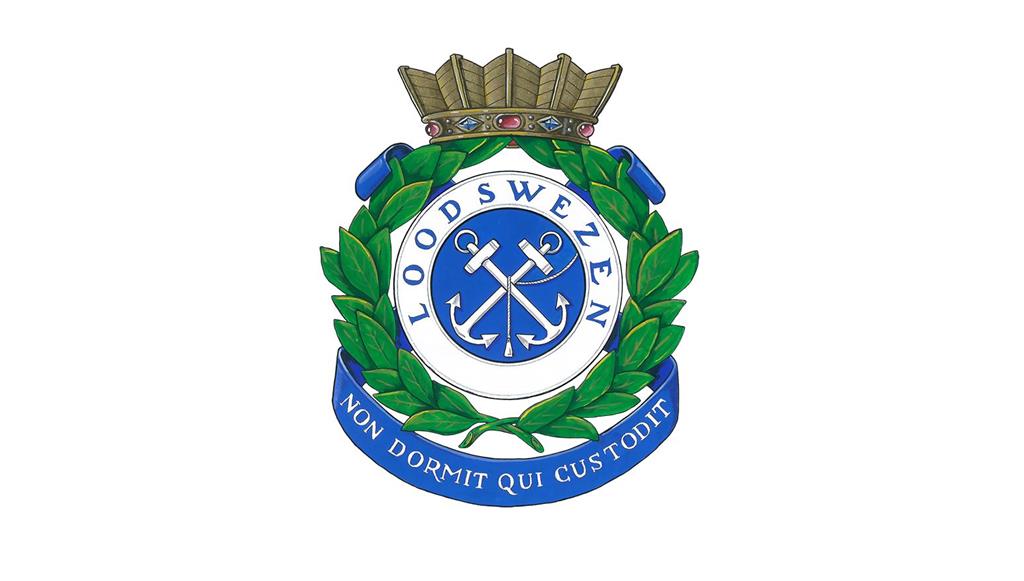 For years, it was assumed that the coat of arms carried by the Nederlandse Loodsencorporatie (NLc) belonged to them. However, colleague Marc Tijthoff (former secretary of the NLc) discovered that the coat of arms was on loan from the Navy. The round shield with the letters Loodswezen and the two anchors with the perpendicular line (also depicted on the well-known silver pilot badges) is inextricably linked to the corps of marine pilots throughout the history of the Dutch Pilotage. As a result, the path towards obtaining a new coat of arms for the Dutch Pilotage Corporation has been initiated. As the NLc is a public law professional organisation (and therefore a government institution), the General Council submitted a request to the King in 2021 for an own emblem. On 14 October 2021, the King decided in favour of this request by Royal Decree. Based on this decision, the High Council of Nobility designed a new emblem for the NLc. The motto has remained the same and reads 'Non Dormit Qui Custodit', which means 'He who watches over does not sleep'.

This emblem expresses the solidarity, commitment and reliability of all pilots in the Netherlands. It also serves to strengthen the mutual bond of the pilots who together form the Dutch Pilotage Association.

Loodswezen - NEDERLANDSE LOODSENCORPORATIE
What's your opinion on this?
Login or register to write comments and join the discussion!
Read more...

Arjen is a pilot in the Amsterdam-IJmond region. A registered pilot is an advisor to a ship. In good or bad weather, a pilot's work always goes on. Interaction between people is an important part of being a pilot.

Resilience is the hallmark of life. The video, titled Fortitude in Adversities, endeavour to highlight our camaraderie and unity as professionals during this pandemic. As we sail through uncertain times, with our core values of Safe, Professional, Reliable and Efficient, we will continue to keep the port safe and the ships moving. We are the Singapore Maritime Pilots. ~ Total Excellence Creative Team #harbourpilots #harborpilots #maritimepilots #marinepilots #pilots #singaporepilots

by Marine-Pilots.com - published on 8 September 2020

Article Information & Rules of conduct for maritime pilots regarding COVID-19

Information about Corona, COVID-19 and SARS-CoV-2.

The Viking Mars is a brand new cruise ship, built this year (2022). While it is a relatively small ship when it comes to cruise liners, it's still an imposing vessel. It's big enough to enable them to fit a planetarium, fitness center, hair salon, a spa, and the usual shops, restaurants and cabins. We have filmed quite a few vessels coming in and out of Holyhead port now, and the Viking Cruise Line ships are, without doubt, some of the most classy and good looking vessels about. Lovely...